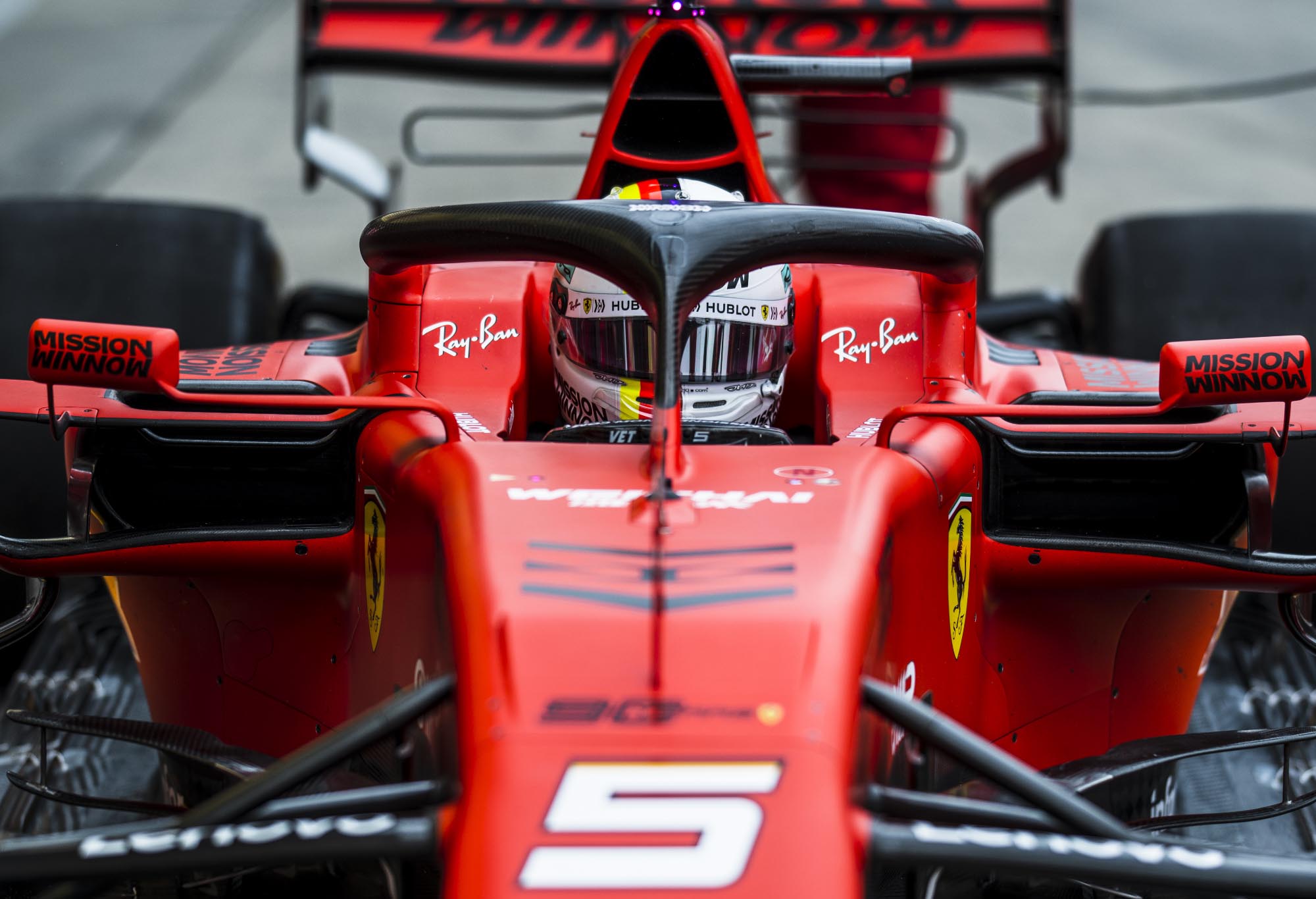 Sebastian Vettel has taken pole from teammate Charles Leclerc in a surprisingly dominant Sunday morning qualifying for Ferrari at the Japanese Grand Prix.

Ferrari looked way off the pace during Friday practice, but the team rebounded spectacularly to lock out the front row, with Vettel leading Leclerc by 0.189 seconds.

Valtteri Bottas was the fastest challenger for Mercedes, the Finn 0.229 seconds off the pace.

It was an important result for Vettel, halting the nine-race streak in which Leclerc has beaten him in qualifying, and it was made sweeter by the unexpected circumstances of his success.

“I think we were quite surprised, to be honest,” he beamed. “We didn’t expect to lock out the front row.

“It was unbelievable … I really enjoyed it, but it’s only part of the job done, so I look forward to [the race] this afternoon.”

Leclerc, whose run of four successive pole positions has now come to an end, said he was wary of the Mercedes threat from behind, the Silver Arrows having demonstrated strong race pace on Friday.

“I’ve been a bit struggling since the beginning of the weekend, but to be honest I’m pretty happy with my lap,” he said.

“Very happy and very surprised to be first and second after the free practices that we’ve had, but the race is most important and hopefully we can keep these positions.

“Mercedes are very quick in the race, so it’s not going to be easy, but we’ll try and focus on our job and keep this one-two.”

Valtteri Bottas extended his practice qualifying superiority over teammate Lewis Hamilton in Mercedes’s second-row lockout, and the Finn said it was now on the team to find a way past the red cars at the difficult-to-pass circuit.

“We seemed quite strong but we always knew Ferrari might have something in reserve and turn things up,” he said. “In the straight line they’re good and through the corners we’re good.

“We will try to do everything we can to get ahead. Nothing is lost yet for us. Let’s see in a few hours.”

Red Bull Racing was disappointed to be so far off the pace, with Max Verstappen and Alex Albon setting identical times 0.787 seconds off Vettel’s pole time. Verstappen complained several times of engine problems, but most of the time lost was in the medium-speed middle sector rather than the flat-out final part of the circuit, suggesting the car simply wasn’t a match for its fellow frontrunning machines.

Both McLaren cars will start on the fourth row, with Carlos Sainz and Lando Norris qualifying seventh and eighth respectively ahead of Toro Rosso’s Pierre Gasly and Haas driver Romain Grosjean.

Renault endured a shocking morning of qualifying, with Nico Hulkenberg and Daniel Ricciardo eliminated 15th and 16th in uncompetitive and unreliable machinery.

Hulkenberg made it through to Q2 but failed to improve his Q1 time before he was recalled to the pits with a critical hydraulics problem, while Ricciardo lost time in the final sector that had him miss out on progression by 0.099 seconds.

Sergio Perez qualified 17th for Racing Point, a particularly slow middle sector costing him in the battle with Ricciardo, while Williams driver George Russell will start 18th on the grid.

Teammate Robert Kubica is at risk of not being ready for the race after a heavy crash on the pit straight at the start of his first qualifying lap inflicted heavy damage on his Williams car.

The Pole ran wide on the exit, where the lack of grip on the grass sent him careering into the barrier, ripping off the front-left wheel assembly and breaking the rear-left suspension.

Describing conditions as “a joke”, he climbed from the car unscathed under red flags.

Kevin Magnussen was next into the barrier shortly after the resumption, likewise at the final turn, but the Dane spun his rear wheels at the apex and spun backwards into the wall, breaking his rear wing.

Though he was able to rejoin the track and return to the pits under red-flag conditions, the damage was too significant to repair before the end of the session, leaving him without a lap time.

← Saturday cancelled as Typhoon Hagibis bears down on Suzuka