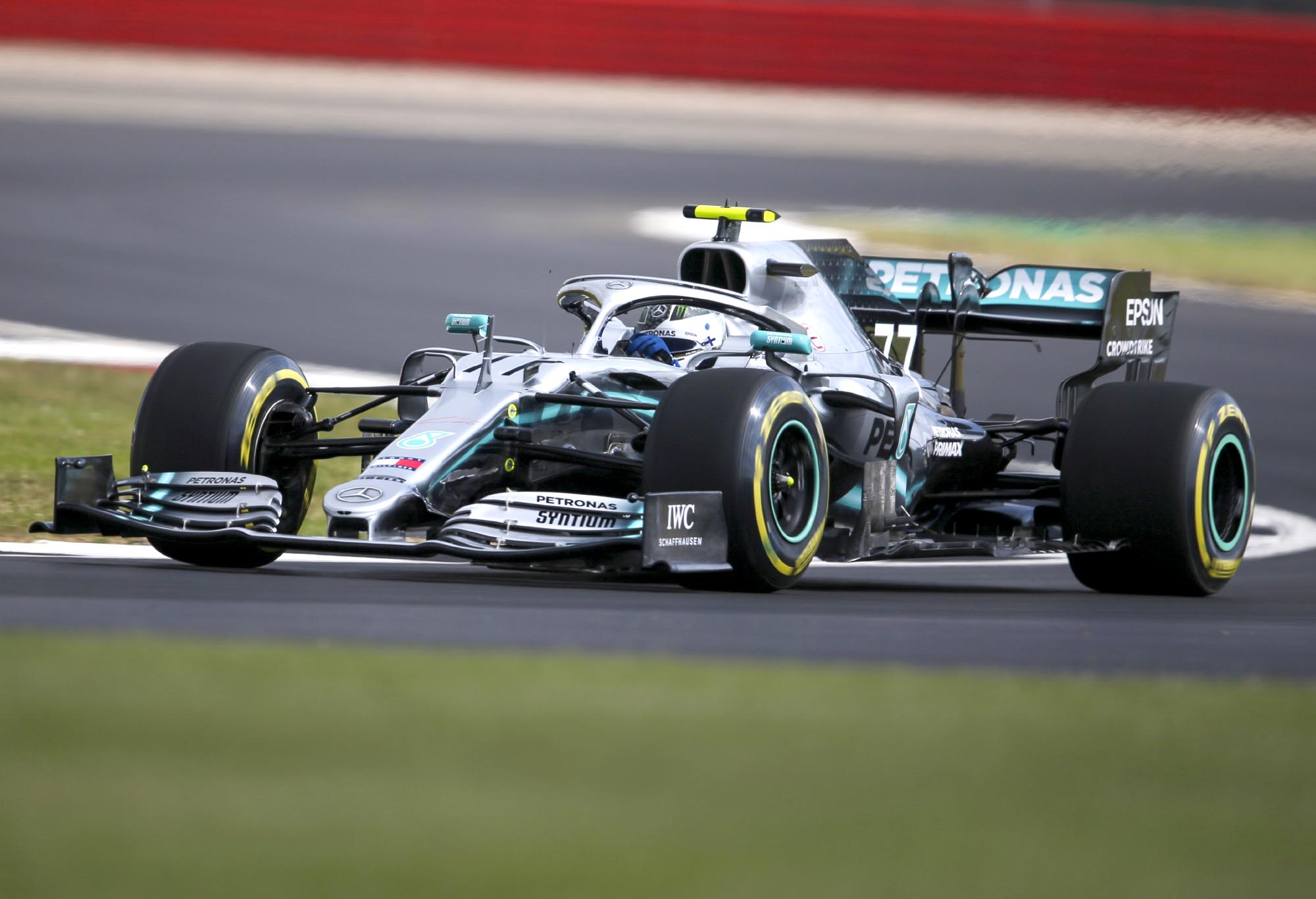 Valtteri Bottas will lead a Mercedes front-row lockout at the British Grand Prix after edging teammate Lewis Hamilton in a thrilling qualifying session at Silverstone.

Bottas claimed his fourth pole position of the season by just 0.06 seconds from the home-crowd favourite Briton despite failing to improve with his final qualifying lap.

The Finn’s place at the head of the field was momentarily in doubt as Hamilton, running behind him on the track, began picking up time in the middle and final sectors on his own last attempt, but a poor first sector was enough to negate the gains, ensuring Bottas held pole by the agonisingly slim margin.

“It feels very good,” Bottas said. “It just reminds you why you do this, these kinds of feelings.

“It’s been pretty close all weekend and today with Lewis, and I’m just really, really happy to get a good lap and put it on pole.”

Hamilton lamented the mistake he made on his first attempt at pole position, which gave way to fast but ultimately imperfect second try that fell fractionally short.

“Firstly congratulations — Valtteri did a solid job throughout qualifying,” he said, though his expression gave away his disappointment to satisfy the parochial home crowd. “Ultimately not good enough.

“At the end I had that mistake on the first lap and the second one just wasn’t really that great.

“We worked really hard throughout the session but it just got a little bit away from us.”

“I think in Q3 Mercedes turned up a little bit the engine and they were very, very quick,” he said. “Third place is the best we could have done today, so I’m very happy about it.”

The top three will start with opposing tyre strategies, with both Mercedes drivers starting on the more durable medium compound and Leclerc starting on the soft. Though the grippier compound will give Charles an advantage at lights-out, tyre wear is high on the newly resurface Silverstone Circuit, potentially handing the Silver Arrows an advantage if the race were to be run on a one-stop strategy

Verstappen finished fourth, 0.183 seconds off pole, ahead of teammate Pierre Gasly in fifth, the Frenchman turning in an improved performance despite his half-second gap to Bottas’s headline time.

Sebastian Vettel ended a disappointing afternoon in sixth, almost 0.7 seconds off pole and more than 0.6 seconds behind his teammate, the German having spent most of the weekend off the pace.

Daniel Ricciardo was best of the rest in his Renault equipped with a new engine and chassis after the former failed and the latter cracked during practice on Friday. The Australian held McLaren rookie Lando Norris at bay by a tenth of a second to share the fourth row.

Thai driver Alex Albon impressed with ninth on the grid, beating Renault’s Nico Hulkenberg by just 0.041 seconds for the final places in the top-10 shootout.

Antonio Giovinazzi beat teammate Kimi Raikkonen to 11th in the Italian’s midseason resurgence after a rocky start to his year. The gap was tight, though — just 0.027 seconds separated him from the Finn, and McLaren’s Carlos Sainz only a further 0.032 seconds further back after abandoning an underwhelming final lap.

Romain Grosjean qualified 14th, only barely salvaging his time in the second segment during which he spent most of the time lapping substantially slower than he had in Q1. The Frenchman complained that his notoriously unpredictable Haas car was behaving completely differently to the way it had only 10 minutes earlier, and though he improved marginally with his final lap, he was still off his earlier pace by the time the chequered flag fell.

Sergio Perez qualified 15th, somewhat of an anticlimax after the Mexican’s last-gasp success to pip Kevin Magnussen by just 0.013 seconds to progress to Q2.

Magnussen qualified 16th, but even more dispiriting for the team was that he was off Grosjean’s pace by more than 0.3 second in Q1 despite the Frenchman running an aerodynamic kit from the Australian Grand Prix as an experiment.

The gap between them would suggest the last nine rounds of development have been detrimental for the car, giving the English-American team food for thought.

Daniil Kvyat was knocked in 17th after a performance the Russian admitted was poor, but it was still good enough to outqualify Lance Stroll in 18th, the Canadian eliminated in Q1 for the 14th successive race.

George Russell comfortably beat teammate Robert Kubica in the Williams intra-team battle for the back row to complete the grid.