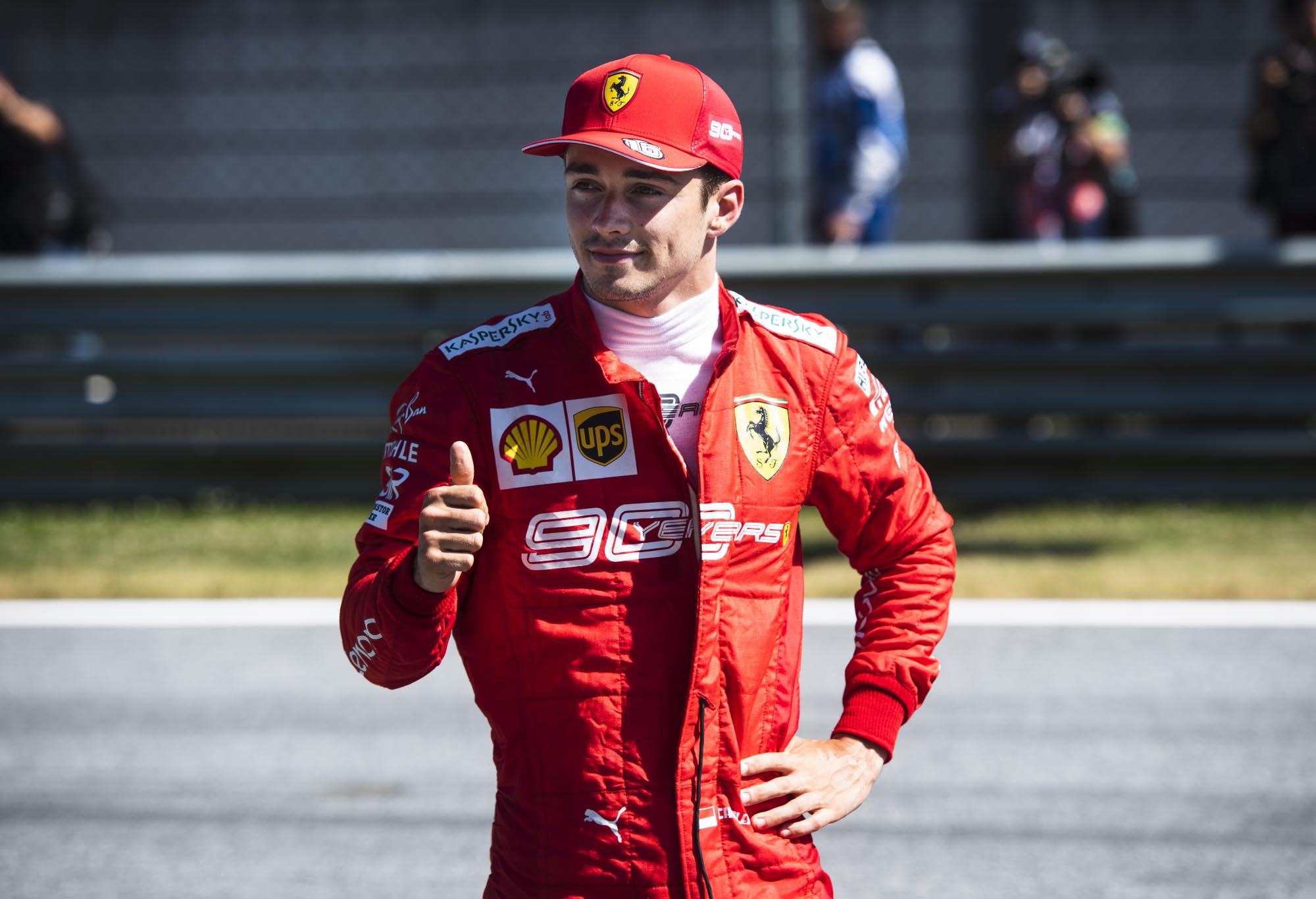 Charles Leclerc has captured his second career pole position in a dominant qualifying performance at the Austrian Grand Prix after Ferrari teammate Sebastian Vettel withdrew from the session with engine trouble.

Leclerc’s place at the head of the grid never looked in doubt, with the 21-year-old comfortably taking provisional pole at the start of the top-10 shootout before consolidating his best time with a final lap to seal the deal with a 0.259-second margin.

“it was quite good,” Leclerc said. “A big pleasure to drive this car on the limit. It just felt great.”

Leclerc saw off Lewis Hamilton for pole, but the Briton was slapped with a grid penalty for impeding Kimi Raikkonen during Q1 in a post-session stewards hearing.

Hamilton will therefore start fourth, promoting Max Verstappen to the front row alongside the Ferrari driver.

The race is set to be a fascinating strategic duel between Leclerc, who will start on the faster soft tyre, and Verstappen, who will use the more durable medium compound. It could be a decisive difference in what is forecast to be very hot Spielberg afternoon.

“On what we tested in [free practice] we are pretty happy with the choice we made, so we’ll see tomorrow,” Leclerc said. “It will be all about management of everything. Hopefully a good result tomorrow.”

Kevin Magnussen was ecstatic to qualify fifth for Haas knowing that he will serve a five-place grid penalty for an unscheduled gearbox change. The Dane will start the race from 10th.

Alfa Romeo teammates Kimi Raikkonen and Antonio Giovinazzi will start sixth and seventh ahead of Pierre Gasly in the second Red Bull Racing car, who was slowest of all in another painfully disappointing qualifying session. The Frenchman was more than three quarters of a second slower than teammate Verstappen and qualified ahead of only Vettel, who was unable to set a time.

Romain Grosjean was the quickest driver knocked out of Q2, but it was Haas teammate Magnussen who decided the session despite qualifying for the top-10 shootout.

Late in Q2 the Danish driver carried too much speed into turn four, and though he managed to avoid running into the gravel by getting hard on the brakes, his slowed Haas served as a road block for a gaggle of cars following him on their own final flying laps.

Renault’s Nico Hulkenberg and Daniel Ricciardo were the worst affected, with both forced to abandon their laps and running out of time to start another, knocking them out in 12th and 14 respectively.

Hulkenberg will also serve a five-place grid penalty for an engine component change, dropping him to 17th.

Toro Rosso’s Alex Albon qualified 13th and McLaren’s Carlos Sainz 15th, but both will be sent to the back of the grid in that order after taking fresh engines this weekend beyond their allocation for the season.

Stroll, knocked out of the first session for the 13th successive weekend, was also a victim of the Red Bull Ring’s notorious sausage kerbs, picking up damage to his front wing and requiring a mid-session change.

Daniil Kvyat qualified a furious 18th after his final flying lap was badly blocked by a string of rival drivers on slow warm-up laps. The Russian rocketed around turn nine and almost into the back of Williams driver George Russell, forcing him to take evasive action off the track, ruining his lap.

“I almost killed someone!” Kvyat exclaimed between expletives, and the stewards undertook to investigate the incident after qualifying.