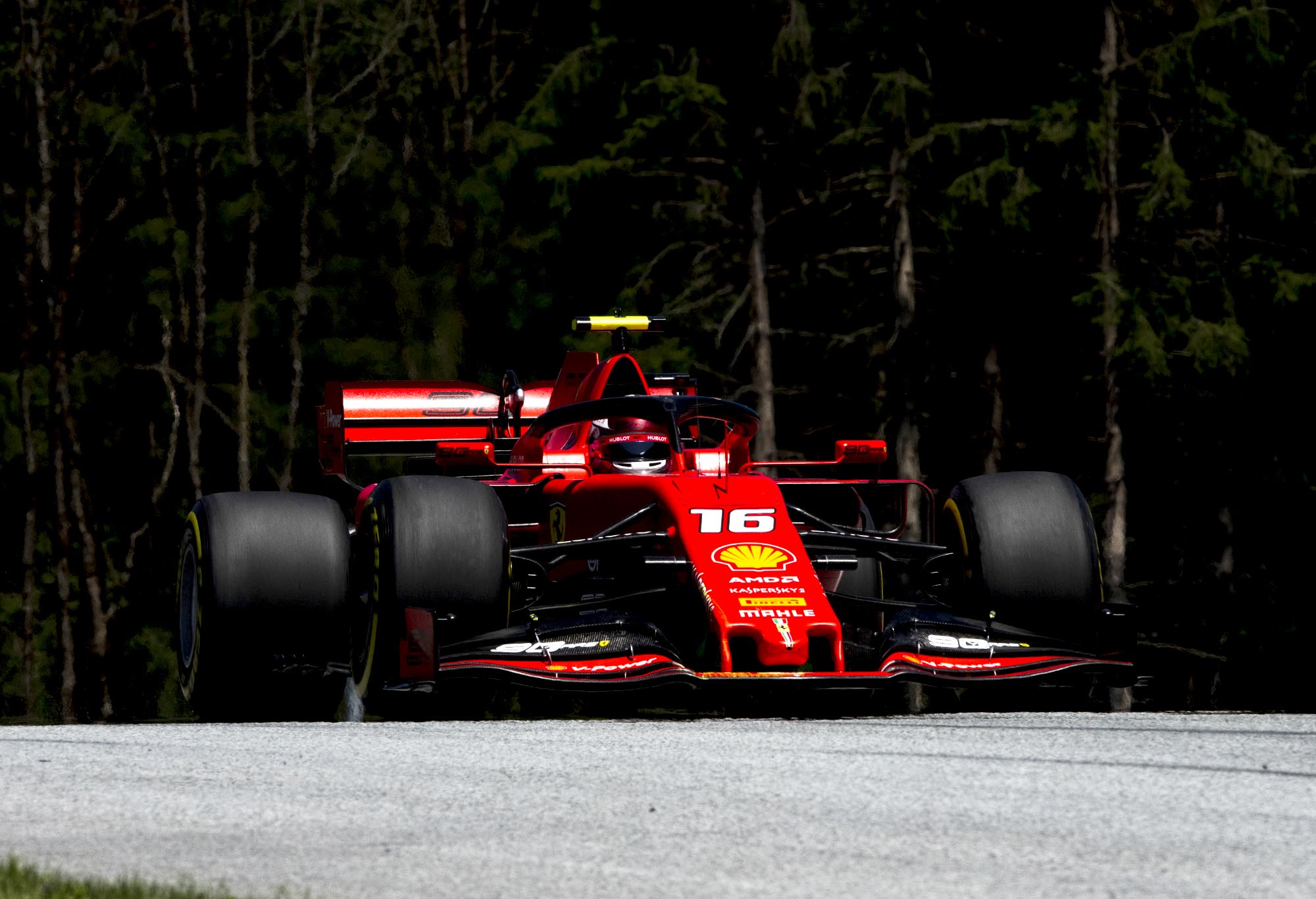 Charles Leclerc has topped the practice time sheet at the Austrian Grand Prix after a chaotic afternoon of crashes and carnage.

The Monegasque was one of the few frontrunners to keep out of the barriers at the Red Bull Ring to find his way clear to set the day’s best time of 1 minute 5.086 seconds.

It was a validating result for Ferrari, which is continuing its aggressive upgrade push to catch Mercedes. In France the team was frustrated by a lack of improvement, but Leclerc’s practice result this weekend will have heartened the team desperate for its first win of the year.

Valtteri Bottas was second, 0.331 seconds further back, but the Finn, poleman at the 2019 Austrian Grand Prix, and Max Verstappen, winner at least year’s race, crashed heavily in the first half of the afternoon practice session, ending their days without undertaking any race simulation work.

Verstappen was the first to find the barriers, losing his car on the exit of turn 10 and spinning backwards into the wall. Red Bull Racing suggested afterwards that wind had been a contributing factor in the Dutchman’s crash, which broke his car’s rear-right suspension and rear wing.

The session was briefly suspended while the wreckage was cleared, but just one minute into the resumption Valtteri Bottas caused a second red flag for a violent crash at turn six.

The Finn suffered a snap of oversteer on entry, but as he regathered control of the car the rear tyres re-established traction, sending him spearing into the outside barrier and ripping off both front wheels.

It was a messy conclusion to a difficult day for Bottas, who lost almost half an hour in the morning when his team discovered an engine oil leak before running got underway. He was switched to an old specification engine for the first session before having the repaired second unit reinstalled in the afternoon before crashing.

Sebastian Vettel risked a third red flag when he lost his car on entry to turn 10. He slid perilously close to the barrier but came to a halt mere metres from disaster, allowing him to limp back to the pits on badly damaged tyres to continue his session.

Pierre Gasly had a largely untroubled day excepting a spin through the gravel early in the second session, ending 0.4 seconds off the pace in third. Lewis Hamilton was fractionally behind the Frenchman, but the championship leader missed his chance to set a time on the soft-compound qualifying tyre among the early-session carnage in the afternoon, distorting the competitive picture ahead of qualifying on Saturday.

Carlos Sainz ended the day fifth fastest for McLaren, but the Spaniard will start from the back of the grid with a penalty for taking a new power unit this weekend beyond the maximum number allowed for the season. Toro Rosso’s Alex Albon after the Thai driver took the latest version of the Honda engine.

Romain Grosjean finished sixth for Haas, suggesting the American team’s run of strong results in Austria will continue despite its current slump in form.

Kimi Raikkonen was seventh for Alfa Romeo ahead of Vettel in eighth. Max Verstappen was ninth despite his crash, while Lando Norris was 10th in the second McLaren.

Cooling will likely play a role in the weekend’s results, with track temperatures peaking past 50°C thanks to the heat wave gripping Europe, but the Red Bull Ring’s infamous reverse Vallelunga kerbs present the biggest challenge to the drivers, with several suffering damaged or broken front wings after running wide over the deterrents in the final sector.

← Gasly: No-one is happy and neither am I
Leclerc dominates qualifying for Austrian GP pole →