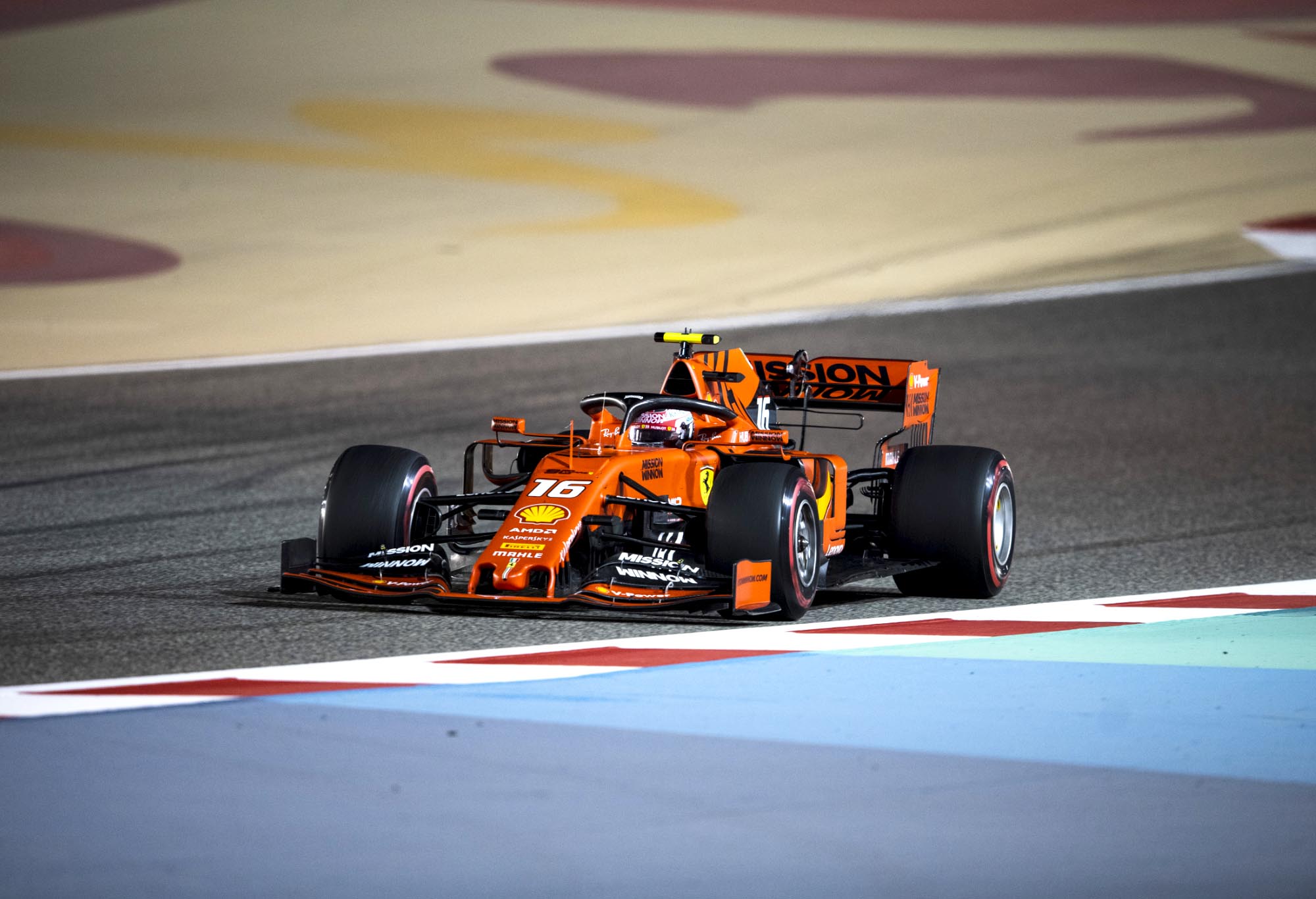 Charles Leclerc has taken the first pole position of his Formula One career by breaking the all-time track record at the Bahrain Grand Prix.

Under the Sakhir floodlights and the gaze of Ferrari CEO Louis Camilleri Leclerc took provisional pole from Mercedes pair Lewis Hamilton and Valtteri Bottas, with teammate Sebastian Vettel sitting out the first runs of the session.

Vettel, who held the previous track record at this circuit, took to the track in time for the final runs, but it was clear from early in the lap he wasn’t going to match his Monegasque protégé.

The German slotted into second place, and Leclerc improved his on his first attempt to put his pole position beyond doubt, beating the track record by 0.092 seconds.

“Extremely happy,” Leclerc beamed. “Obviously in the last race [in Australia] I was not very happy with my qualifying. I really worked hard to try and not do the same mistakes here.”

Leclerc wouldn’t be drawn on beating his more experienced teammate just two races into his Ferrari tenure, but he admitted he was pleased to start ahead.

“It’s obviously extremely hard because Seb is an amazing driver and I have learnt a lot from him. But today I’m very happy to be in front of him.”

Vettel was upbeat after qualifying to see Ferrari had recovered from the issues that prevented his team from competing for pole in Melbourne two weeks earlier.

“I said to the team the main thing is we got the job done,” Vettel said. “This weekend the car felt a lot better throughout the weekend. Hopefully we can carry that into the race tomorrow.”

Hamilton qualified third, 0.324 seconds behind Leclerc. It was a strong turnaround for Mercedes from the start of the weekend, when the team’s deficit to Ferrari looked as large as a second or more.

“It was great to see the progression for us over the weekend,” he said. “They’ve showed incredible pace, but it doesn’t mean they can’t be beaten. We’re going to work at it.”

Championship leader Valtteri Bottas qualified fourth but more than half a second ahead of Red Bull Racing’s Max Verstappen.

Kevin Magnussen was ecstatic to qualify sixth for Haas and just 0.005 seconds behind Verstappen, the Dane capitalising on Pierre Gasly’s Q2 elimination.

McLaren’s Carlos Sainz in seventh separated Magnussen from Haas teammate Romain Grosjean in eighth, but the Frenchman will be investigated post-session for blocking Lando Norris early in Q1.

Kimi Raikkonen qualified ninth for Sauber ahead of Norris in 10th.

QUALIFYING TWO
Just one second separated the midfield in Q2 and only 0.383 seconds covered the elimination zone between places 10 and 15.

Renault failed to make it to the top-10 shootout for the second race in succession, with Daniel Ricciardo falling just 0.017 seconds short of the target.

Red Bull Racing’s Pierre Gasly complained of an unstable car on his way to 13th, radioing his team on his warm-down lap that he had no confidence on the throttle due. He qualified 0.2 seconds ahead of Racing Point’s Sergio Perez in 14th.

QUALIFYING ONE
Taking place immediately after sunset, the Bahrain circuit became rapidly quicker as the first 18-minute session progressed, making the final minutes of Q1 frenetic for the midfield teams.

Track timing was everything, as evidenced by four teams being represented in the five knockout places.

Nico Hulkenberg qualified 17th, 0.008 seconds behind Giovinazzi, and was forced to watch teammate Daniel Ricciardo compete in the second session from the garage, as was Racing Point’s Lance Stroll, eliminated in 18th.

Williams pair George Russell and Robert Kubica brought up the rear with a 1.5-second gap to the next-best cars, the young Briton besting his Polish teammate by 0.04 seconds.