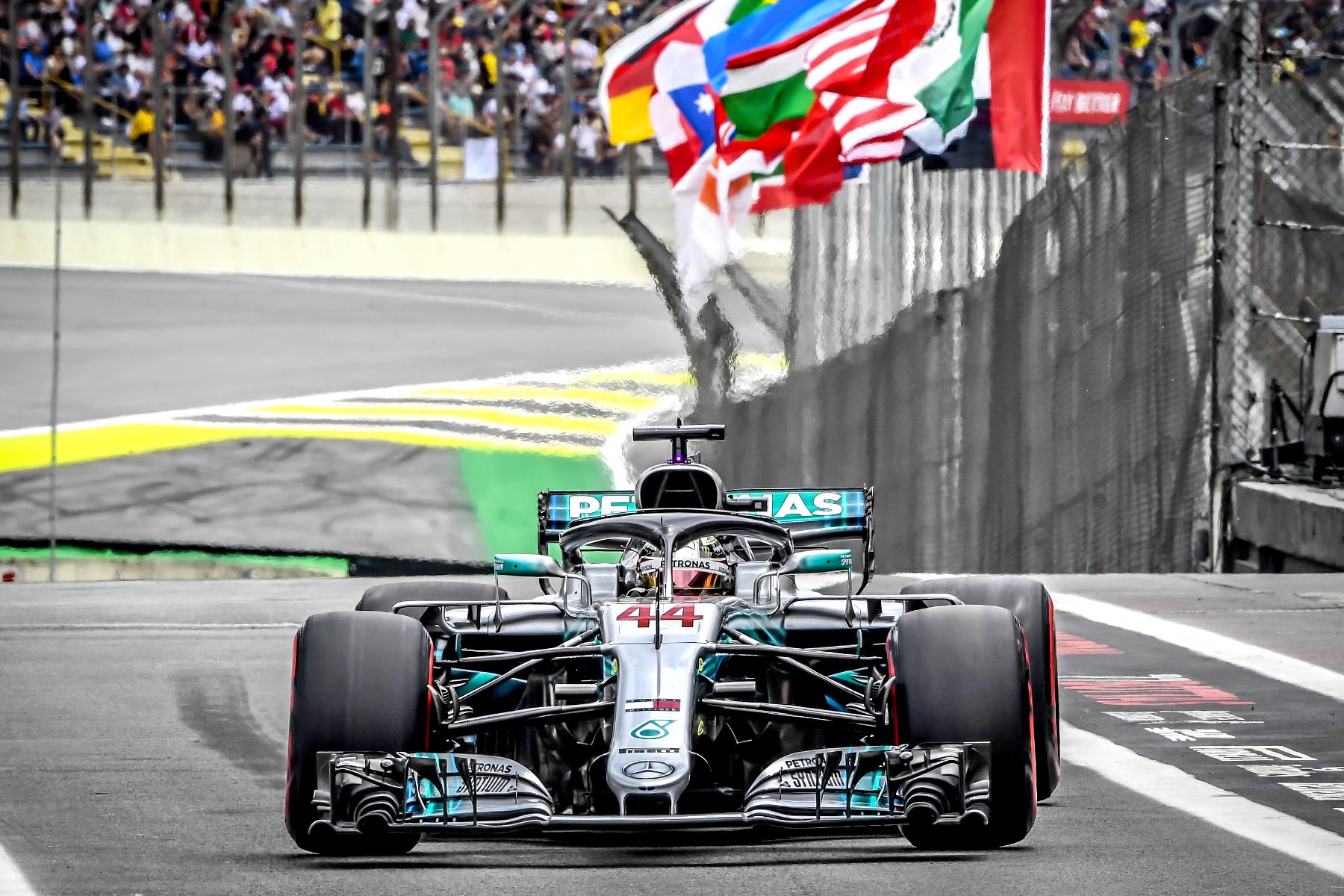 A lucky Lewis Hamilton victory in Brazil has helped Mercedes to its fifth consecutive constructors championship after Max Verstappen was spun out of the lead by a lapped car.

Verstappen had used superior tyre strategy to manoeuvre himself past polesitter Hamilton and into a comfortable lead during the second stint, but the Dutchman was clobbered by Force India’s Esteban Ocon on lap 44, dropping him to second place and handing the victory to Hamilton.

Second place would’ve been enough to guarantee Mercedes the constructors championship, but after winning the drivers title in Mexico with a lacklustre fourth place, Hamilton was happy to celebrate the team’s triumph with a victory.

“The last six years have been an incredible journey,” Hamilton said. “This is what everyone works for the whole year.

“We were struggling, we had problems with the engine … I’m just so proud of everyone. Everyone back home, thank you so much for your continued efforts.”

Max Verstappen pursued Hamilton, but damage to his floor from the crash hindered his progress, and h finished a frustrated 1.5 seconds behind the leader.

“I’m just trying to do my race and suddenly a backmarker is trying to race you and they’re taking stupid risks to dive on the inside,” he said.

“I’m happy with second, but we should’ve won today.”

Kimi Raikkonen completed the podium after spending the final 10 laps defending against a fast-finishing Daniel Ricciardo, fending off the Australian’s advances by just 0.4 seconds at the flag.

The Brazilian Grand Prix was a thriller in which the finishing positions among the top six was undecided until the final lap.

Hamilton started from pole, but Sebastian Vettel, who qualified second and started the race with the more durable soft tyre, was thought to be his biggest threat to the race. The German struggled from the start, however, letting Valtteri Bottas into P2 at the first turn and allowing Hamilton to build a small lead.

Max Verstappen quickly emerged as a serious victory contender. The Red Bull Racing driver relieved Kimi Raikkonen of fourth place on the third lap and pinched third from Vettel one lap later. By lap 10 he was past Bottas and in pursuit of Hamilton.

Verstappen’s Red Bull Racing teammate, Daniel Ricciardo, was also making fast progress, albeit after starting 11th with a grid penalty for a turbocharger change. After just five laps he was up to sixth and all over the back of Vettel, who had slipped behind Raikkonen into fifth, but all three were bottled behind Bottas, who was struggling with his supersoft tyres.

By lap 18 both Mercedes were struggling badly enough on the supersoft tyre to make an early switch the medium compounds, with Bottas stopping on lap 18 and Hamilton making his change one lap later, leaving Verstappen in the lead.

The race was swinging towards Red Bull Racing, which had shown impressive race pace during Friday practice. Vettel and Raikkonen made their stops for medium tyres on laps 27 and 31, but Verstappen and Ricciardo kept on lapping competitively until laps 35 and 39. They switched to the faster soft-compound tyre, giving them distinct advantages over their rival frontrunners to the end of the race.

Verstappen dropped to 2.5 seconds behind Hamilton, but in just five laps he was sweeping around his outside at the first turn. By the end of the lap he was more than two seconds up the road, the race seemingly sewn up.

But disaster struck the Dutchman on lap 44 when Esteban Ocon, who had just stopped for fresh supersoft tyres, attempted to unlap himself. He tried cut down Verstappen’s inside at turn two, but the pair made contact and spun.

Ocon was handed a 10-second stop-go penalty — the harshest penalty available before disqualification — and Verstappen fell to second place and more than five seconds behind Hamilton.

Despite damage to his floor, Verstappen doggedly attempted to claw back the deficit, but it was in vain, and his third win of the season went begging.

The pair would scuffle in the garages after the race, prompting the stewards to summon both to a hearing later in the evening.

The fight for the final podium place was alive to the final lap. Bottas’s defence of third place against Raikkonen cracked on lap 44, but it was Ricciardo on his fresh tyres that seemed most likely to take the place at the flag.

The Australian fought past Vettel on lap 46, but it took him another 12 laps to pass the recalcitrant Bottas, leaving him just 15 laps to pressure Raikkonen into giving up the position. The older Finn defended superbly, and Ricciardo was forced to settle for fourth.

Bottas finished fifth ahead of Vettel, while Sauber’s Charles Leclerc finished at the head of the midfield with an impressive seventh place.