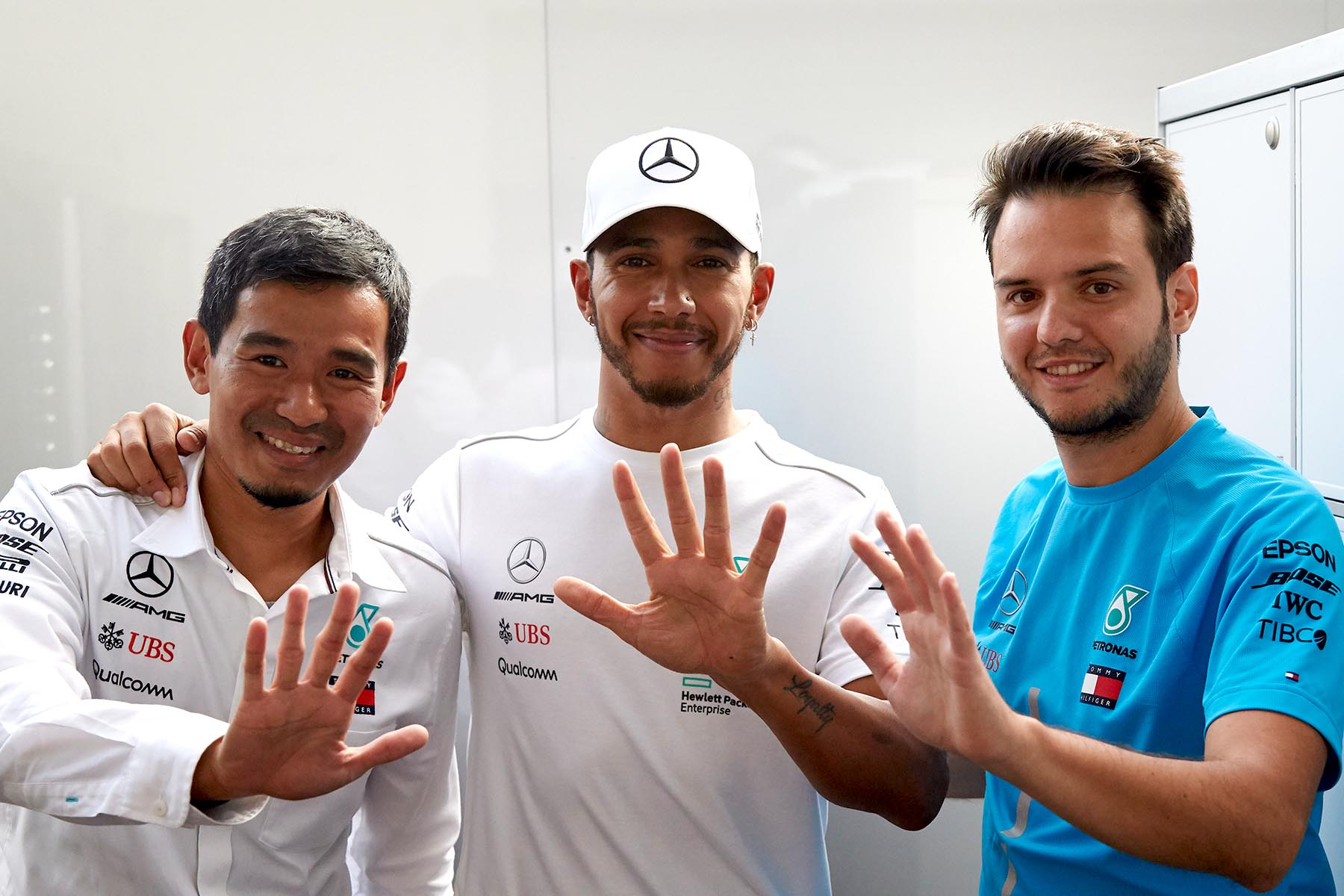 When Lewis Hamilton won his fifth world title in Mexico he joined an elite club of Formula One drivers occupying a place in the upper echelon of the sport.

The first five-time winner was Argentine Juan Manuel Fangio, one of the sports earliest champions, who famously won his five titles with four different constructors — with Alfa Romeo in 1951, Daimler Benz in 1954 and 1955, Ferrari in 1956 and Maserati in 1957.

Partly by virtue of the few races held per season in his time, Fangio also holds the record for the highest win percentage, seizing victory in 46.15 per cent of races he entered.

“Fangio is the godfather of the sport and for us drivers,” Hamilton said earlier in the year. “He is one of the greats from the beginning, so he will always be admired. It is crazy to think that I am embarking on a similar number of championships that he had.”

Fangio’s total of 24 victories was easily eclipsed in following seasons, but it took 45 years for his haul of five world titles to be matched when Michael Schumacher stormed to the 2002 world title with the peerless Ferrari.

Schumacher, whose name is synonymous with Formula One, would win two more titles to set the championship record at seven. His 91 race wins and 68 pole positions were also new benchmarks.

For so long the German’s records were thought unreachable, but after Hamilton’s emphatic charge to a fifth world championship, Schumacher’s position at the top of F1’s pecking order no longer seems impregnable.

Really the signs were there long before today. At the 2017 Belgian and Italian grands prix Hamilton equalled and then bettered Schumacher’s 68 pole positions, and he’s since consolidated his reputation as Formula One’s fastest man with 81 poles.

It’s of course a nice plaudit to have, but Schumacher’s pole total was only three more of Ayrton Senna’s and 13 greater of Sebastian Vettel’s current 55. Schumacher’s stratospheric win and championship records, on the other hand, seemed a step too far.

That certainly seemed the case when Vettel expertly wielded Ferrari’s impressive 2018 car to the first two wins of the season, threatening to finally end Mercedes’s dominance. With a head-to-head battle between the two titanic teams and with Red Bull Racing stealing opportunistic wins, bridging what was a 29-win deficit at the start of the year seemed at best a distant goal.

Hamilton’s career statistics are again instructive. He’s the only driver in F1 history to win at least one grand prix in every season he’s competed for a start-to-win ratio of 31.42 per cent, marginally better than Schumacher’s 29.55 per cent.

More foreboding still is Hamilton’s average wins per season since claiming his first Mercedes championship. From 2014 the Briton has won an average of 9.8 races per year, a figure barely dented by Ferrari’s competitiveness in 2017 and this season.

Consider now that Hamilton re-signed with Mercedes on a two-year deal starting 2019 and the mathematics take care of themselves — Lewis need only continue his current victory rate to match Schumacher’s 91 wins by the end of his contract, and such totals would surely guarantee him his sixth and seventh titles. The extension of his F1 tenure into 2021 would then give him the opportunity to claim both the victory and the championship records outright.

“It’s just still is very, very surreal to think that every now and then I keep coming up against Michael in terms of records and it just reminds me of what a great he was,” Hamilton said after winning his 41st race from pole, beating another of Schumacher’s records.

“It’s taken a long time to be where I am today, and he has some serious records and it’s hard to beat a lot of these records that he had.

“It’s always an honour when his name is brought and mine is brought up at the same time.”

There are similarities beyond mere numbers too. Schumacher was renowned for his off-track focus, training relentlessly in pursuit of any advantage over his rivals.

Hamilton’s approach might be different, but the Briton’s varied extracurricular activities are aimed at the same end of ensuring he’s in the best possible shape to perform at his maximum on a race weekend.

“Tapping into a different part of the mind, naturally doing these things outside a race and it has nothing to do with being a racing driver, but I think it’s keeping the brain stimulated.” Hamilton said. “Naturally people will have opinions for and against things that you do but … I try to do the right things in order to be my best.”

Indeed the travel he undertakes and lifestyle he enjoys outside Formula One has been criticised in the past as presenting a potential distraction, but Mercedes boss Toto Wolff, who has been instrumental in allowing Hamilton to explore other parts of his life, says it is fundamental to his form.

“Without going into too much detail, he is in a good place in his life — he enjoys racing and he enjoys the activities outside of racing,” he said.

“What is also impressive is his constant development and his search for the optimum performance. He is the only driver I have ever heard say, ‘I haven’t driven well, so first we have to look at my driving and then we look at the data’.

“This constant drive for perfection is one of the reasons as to why he is such a complete racing driver.”

It’s difficult to assess a driver’s career before it ends, but Hamilton’s momentum has become irresistible, and with his fifth world championship secured, the Briton must surely be a candidate for greatest of all time — and it seems only a matter of time until the numbers prove it.

← How Vettel lost the championship
The demise of Brendon Hartley →