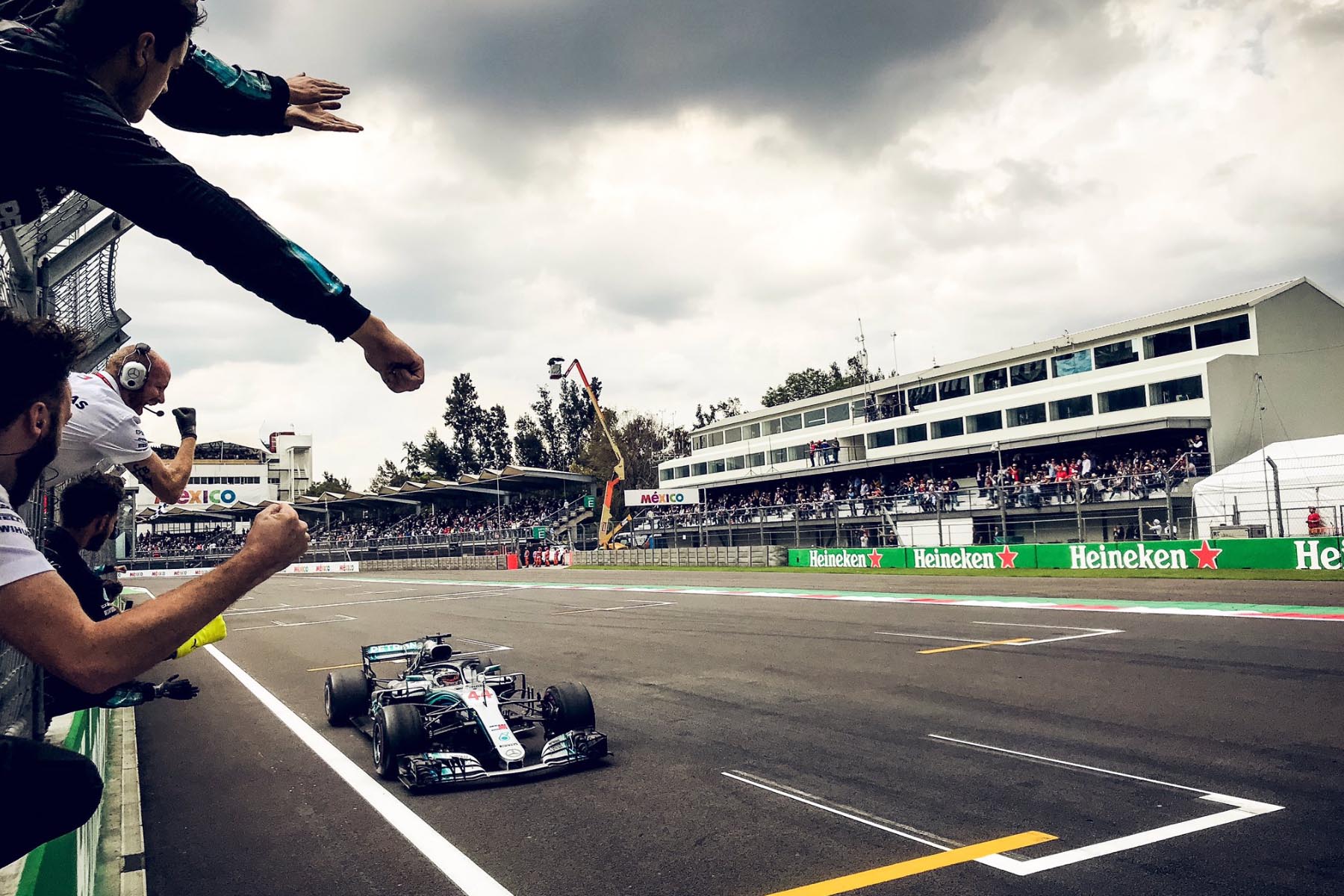 The odds were stacked in Hamilton’s favour, with the Briton needing to finish seventh to guarantee the title if Vettel won the race, but anything less than victory for the German would assure the Mercedes driver claimed the prize.

But Hamilton nonetheless had victory on his mind after a difficult race in Austin last weekend, and he made good on his aim by making a sizzling start to jump polesitter Daniel Ricciardo off the line and following Verstappen into the first turn.

However, just as it did in the United States, Hamilton’s race foundered on poor tyre wear, and his bid for the podium fell apart in a difficult second stint. He was forced to make a second pit stop and conserve heavily in the final part of the race, eventually finishing 78 seconds off the lead.

The result didn’t reflect the dominant second half of the season that delivered Hamilton into a championship-winning position, but it was more than enough to end his title campaign two rounds early and claim a rare fifth crown.

“I want to say a big thank you to my team. What I was saying on the radio was it wasn’t won here; it was won with a lot of hard work throughout all the races.”

Hamilton’s triumph equals the five titles won by Juan Manuel Fangio, who won the 1954 championship with Mercedes, and Hamilton acknowledged the role the Silver Arrows have played in his increasingly decorated Formula One career.

“I’ve been with Mercedes since I was 13, so to complete what Fangio had done with a Mercedes is an incredible feeling. A very, very surreal moment.”

Vettel was downcast post-race despite his title hopes being purely mathematical before the weekend, but the German was gracious in defeat.

“Obviously not an easy day, but well deserved,” he said. “Congrats to him and his team, they did a superb job all year.

“I think we need to stand here, accept that and say congratulations.”

While Hamilton celebrated off the podium, Verstappen was celebrating on it after a commanding driver delivered him his second win of the season.

The Red Bull Racing driver was devastated to lose pole position to his teammate on Saturday, but he made up for it by acing his start and seizing the lead into turn one.

Ricciardo, on the other hand, was bogged down with wheelspin. He was forced to defend against Valtteri Bottas into turn one but emerged from the second corner with third place intact.

Verstappen was busy making hay from the lead, progressively eking out his lead over Hamilton, but tyre management was already coming into play, with Mercedes struggling particularly badly on the ultrasoft tyre.

Hamilton was brought in first on lap 11, opening the pit stop window just as Ricciardo was sizing him up for move. Ricciardo followed him in on the following lap, but the Briton had maximised the fresh rubber to extend his gap to the Australian, maintaining his position.

Verstappen stopped from the lead on lap 13, keeping his place ahead of both, with Vettel and Kimi Raikkonen stopping four laps later.

The Dutchman sprinted further into the lead, using the clean air at the head of the field to keep his tyres alive at the same time, but behind him Hamilton was already running into trouble, his tyres falling away rapidly

The Mercedes driver’s top-speed advantage over Ricciardo helped keep the Red Bull Racing driver behind him, but both were defenceless against Vettel on his fresher tyres, and the German swept past them by lap 39.

It took Ricciardo until lap 47 get past Hamilton, by which point the Briton’s tyres were shot, requiring another tyre change. His pit stop triggered tyre changes for Vettel, who dropped to third behind Ricciardo, and Verstappen, who emerged from pit lane still in the lead ahead of his teammate.

Ricciardo was left on his worn supersoft tyres to slow Vettel’s pursuit of Verstappen’s lead, a task he admirably executed until lap 62, when a devastatingly familiar puff of smoke from his engine forced him to stop by the side of the road in his eighth retirement of the season.

Verstappen turned his engine down to avoid meeting his teammate’s fate, but his buffer was significant enough for him to easily maintain the lead, and he took the chequered flag more than 15 seconds ahead of Vettel and almost 50 seconds ahead of Raikkonen in third.

“The start was the key,” Verstappen said. “I was really determined to win today, luckily we did that.

“We had the right tyres and the cars was working brilliantly.”