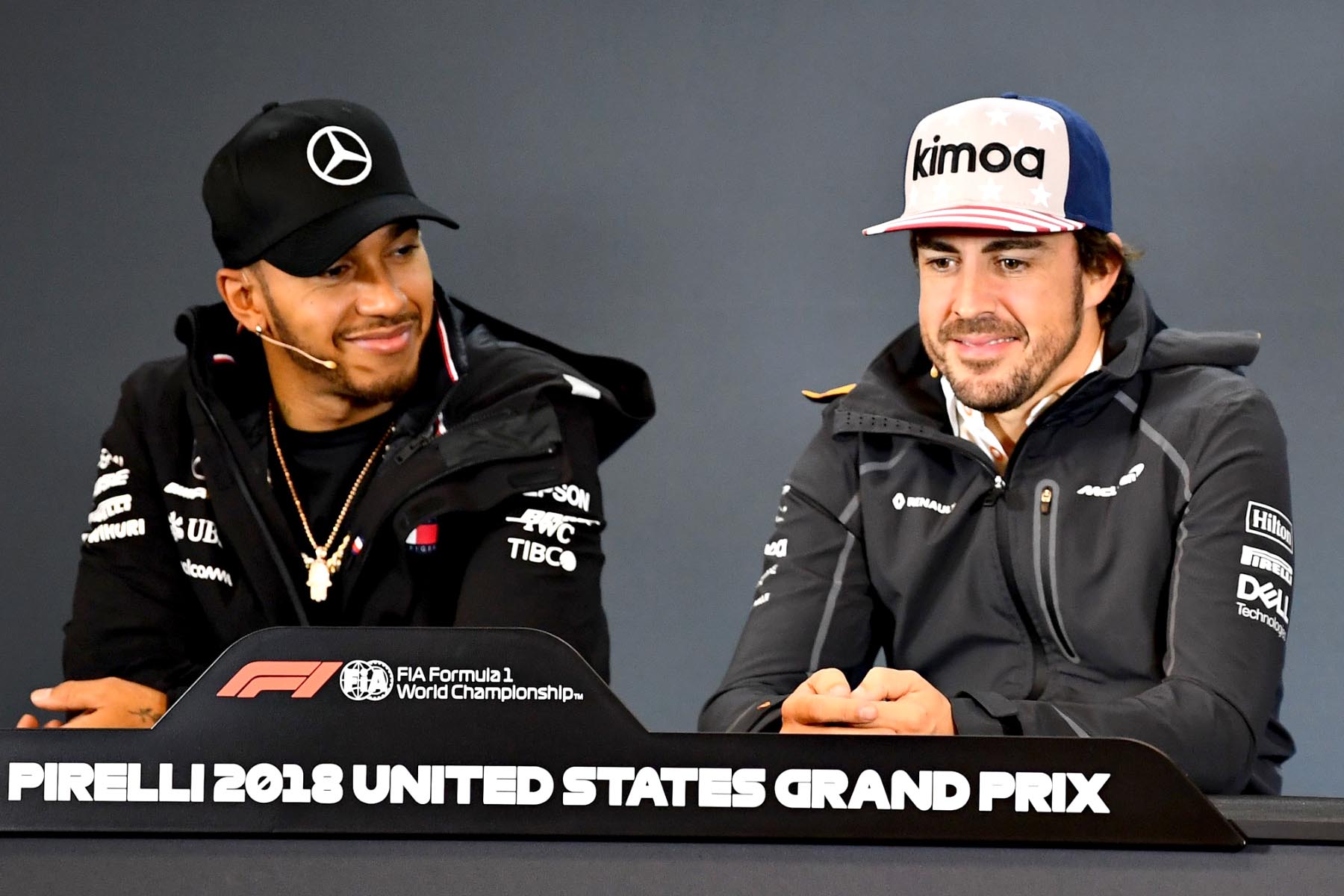 Alonso says Hamilton in top five of all time

Fernando Alonso has heaped praise on soon to be five-time champion Lewis Hamilton, placing the Briton among his top five Formula One drivers of all time.

Alonso and Hamilton were briefly teammates in the Briton’s 2007 rookie season but sensationally fell out over what the Spaniard believed was a broken promise by then team principal Ron Dennis to make him the squad’s number one driver.

Their careers have contrasted dramatically since that season. Hamilton won the 2008 title and switched to Mercedes in 2013, where he won three more and is on track for a career fifth in the coming weeks.

Alonso left McLaren in 2008, struggled through five years of a fruitless Ferrari relationship from 2010 and subsequently lost his twilight years with a desperately uncompetitive McLaren outfit.

But the Spaniard was in a magnanimous mood at the United States Grand Prix as he reflected on his rival’s imminent fifth triumph, marking him out as among the top five Formula One drivers of all time — and ahead of himself in the pecking order.

A fifth Hamilton title would statistically make him the third most successful F1 driver in history, equal with five-time champion Fangio and behind Schumacher’s record seven crowns.

Though Alonso acknowledged that making precise comparisons across eras is difficult, he insisted that the way Hamilton has grown into his multiple championships has made him a worthy statistical leader in the sport.

“Lewis winning five now and equalling Fangio is a great achievement. If one had to do that in our generation, I’m happy it’s Lewis, because he showed the talent and he showed the commitment.

“Probably in 2007 it was difficult to imagine what the future would bring to Lewis. He showed his talent from day one, fighting for the championship in his rookie year and winning it in 2008.

“Probably at that time we could all agree that five or seven titles would be possible for him.

“He was able to win races when the car was there to win them, but he was also able to win races in seasons when his car was not on top form, like 2009 and things like that — he was still winning a couple of grand prix per year, so it’s impressive.”

“That’s difficult to see in our days.”

He also has just 20 fewer wins that Schumacher’s 91 victories — but with the Briton winning an average of 10 grands prix a season since 2014, he’s odds-on to claim that record over the course of his two-year deal with Mercedes from 2019.

Hamilton said he found it difficult to contemplate being named among the sport’s top drivers, particularly Juan Manuel Fangio, whose five world title he’s likely to equal in the next eight days.

“Fangio is like a godfather of the sport for us,” he said. “He’s one of the greats from the beginning and he will always be admired in the sport.

“It’s crazy for me to think I am embarking on a similar number of championships that he had.”

But the Briton added that he was keeping his feet on the ground until the championship is firmly within his grasp.

“We are focusing on making sure we deliver,” he added. “There are still 100 points available, so we can just never be complacent in a championship as intense as this.

“I’m definitely not thinking how I will feel here if I do the job, because I have got to do the job and that just adds more pressure and you don’t need more pressure.

“I’m just focusing on driving the best that I’ve driven all year long.”