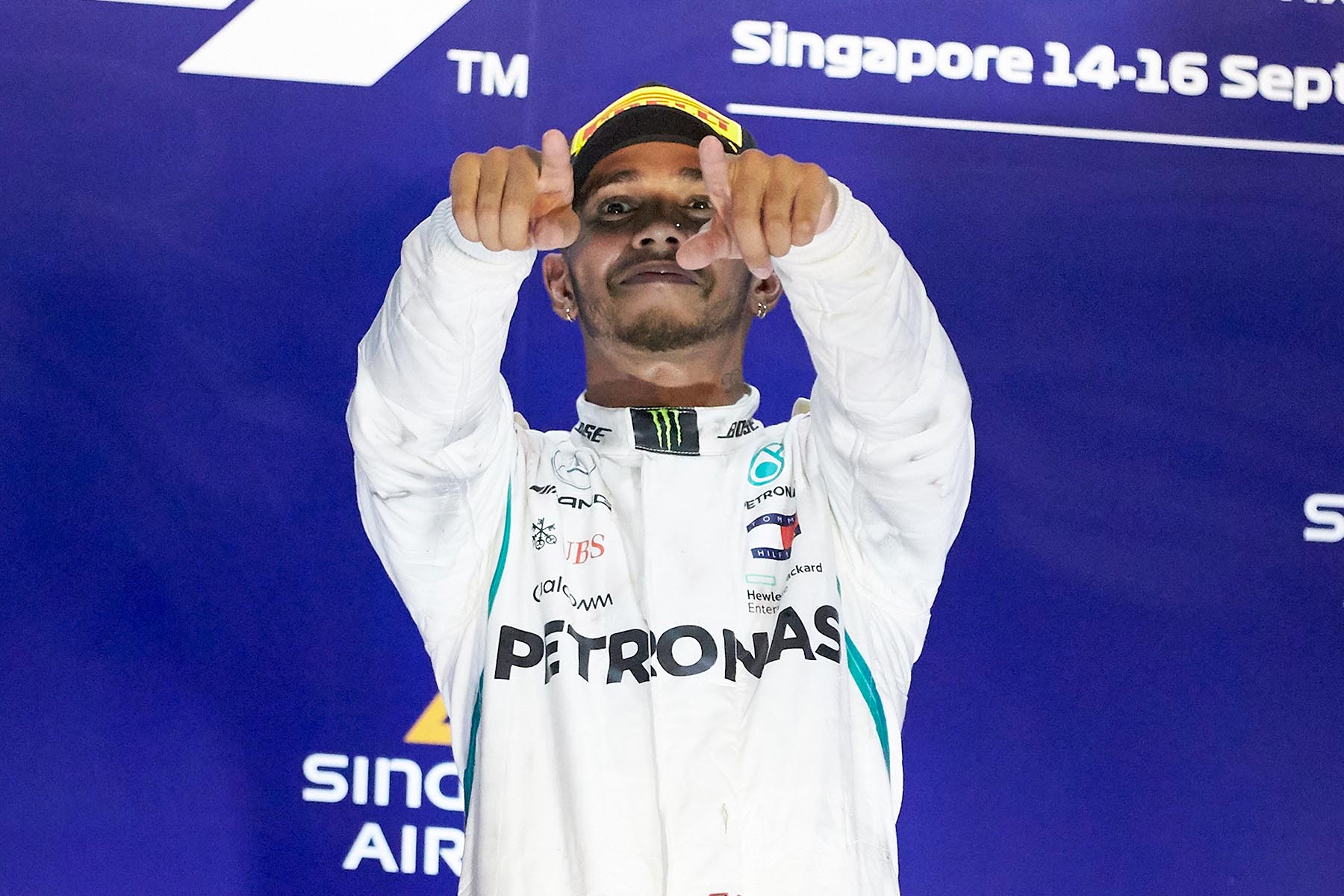 Ferrari started the weekend from a position of assumed dominance, but despite practice times supporting the assertion, the Italian team struggled in qualifying, leaving Vettel third on the grid behind pole-sitter Hamilton and Red Bull Racing’s Max Verstappen in second.

Such is the difficulty overtaking around Singapore’s serpentine streets that a clean getaway from pole position would be half the job done, and Hamilton aced his launch, leaving Verstappen and Vettel behind him to sort out the minor podium places.

Vettel couldn’t make a move stick on his Dutch rival at the first turn, but he used his Ferrari’s superior top speed to sweep around the outside of the Red Bull Racing car at turn seven just as the safety car neutralised the race to pick up the pieces from some Force India friendly fire — Sergio Perez had nudged teammate Esteban Ocon into the outside wall at turn three, ending the Frenchman’s race on the spot.

The race resumed on lap four. Hamilton had no difficulty keeping Vettel and Verstappen at bay, but the race from there entered a slow and metronomic rhythm of tyre conservation, with the hypersoft compound used by the top 10 in the first stint too delicate to be pushed to the limit.

It wasn’t until lap 13 that Hamilton decided to put the hammer down from the lead, opening a gap of more than three seconds over Vettel in a single lap.

Ferrari was spooked, and anticipating an imminent Mercedes stop it pitted Vettel onto the ultrasoft tyre, seemingly committing him to a two-stop strategy. Hamilton was called in on the next lap, but Mercedes opted to switch him to the soft-compound tyre, which would allow the Briton to run to the end.

Hamilton emerged from pit lane ahead of his title rival, but worse for Vettel was that he’d become trapped behind the slower Force India of Sergio Perez, who hadn’t yet made his first stop. The predicament triggered an opportunistic pit stop for Red Bull Racing, who hauled Verstappen into pit lane on lap 17 for a new set of softs.

The Dutchman rejoined the track side by side with Vettel, who attempted to hang onto the Red Bull Racing car around the outside of turn three, but to no avail. He conceded the place and was forced to nurse his more delicate tyres to the finish.

The race fell back into its sedate rhythm for the frontrunners, but outside the points Sergio Perez was causing drama as he struggled behind Sergey Sirotkin.

Perez made his stop on lap 20, emerging behind the slower Williams but unable to find a way past. Growing increasingly frustrated by his diminishing race prospects, Perez pulled alongside the Russian on lap 34 and steered into his side, erroneously believing himself to have pulled ahead.

Both cars were damaged, but Perez came off worse, picking up a puncture and a drive-through penalty for good measure.

The midfield delivered plenty of better examples of close racing, including between Sirotkin and Haas’s Romain Grosjean, but when Hamilton and Verstappen started lapping the field the slower cars threatened to play a role in deciding the battle for the lead.

Sirotkin and Grosjean were so engrossed in a personal battle that they were slow to make way for the faster cars rapidly closing in behind. Verstappen took the opportunity to close in on Hamilton, but as the pair navigated the traffic he was forced to back off or risk a costly collision with a slower car, and by the time both emerged back in clear air Hamilton was able to recover his advantage again.

“I’m spent!” Hamilton said. “It was a long race — it felt like the longest race of my life. I’m glad it’s over.

“They [Ferrari] put up a good fight this weekend. I’m not really quite sure where their pace disappeared to.

“The team have just never given up faith and belief in me.

“What a day, what a weekend. I feel super blessed.”

Verstappen was similarly pleased to have scored his team’s highest finish since he won the Austrian Grand Prix in June.

“It was a shame from the first lap, but you can clearly see we miss top speed,” he said. “But then I think the team had a great strategy and we could get back into second.

“We did our own race, tried to follow Lewis a little bit, but in the end we knew second was the best result, so we brought it home.”

But as much as Hamilton’s cruisy victory decided the day, Vettel’s disappointment to have lost a crucial 10 points was the abiding memory, and the German wasted little time admitting he and his team had done the poorer job on a weekend that should’ve returned them to the top step of the podium.

“Overall we were not fast enough,” he said. “We tried to be aggressive in the beginning and obviously it didn’t work out.

“After that I think I had a different race than the other guys on a different tyre — pitting was no option because you lose too much time in the pit stop, so we just focused on making it home.

“With the way we raced we didn’t have a chance. There might be something extra in the fact that maybe we weren’t quick enough.

“I said before the weekend we can only beat ourselves, and this weekend we didn’t get everything out of our package.”

Bottas finished fourth after struggling to pass backmarkers late in the race, fending off late challenges from Kimi Raikkonen in fifth and Daniel Ricciardo in sixth.

Fernando Alonso was the best of the rest in his McLaren, finishing sixth to claim McLaren’s first points since the Hungarian Grand Prix in July.