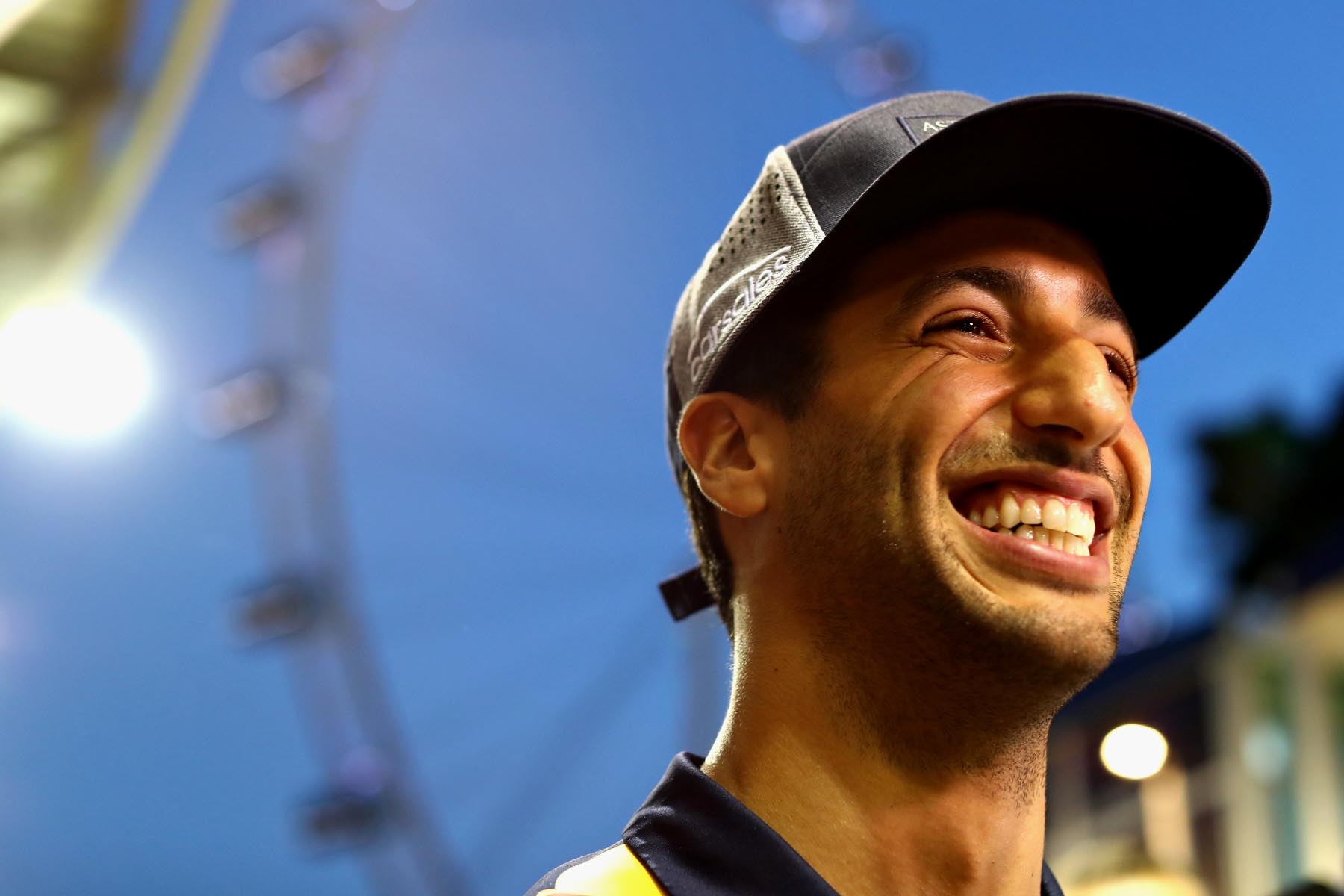 Daniel Ricciardo is quietly optimistic he can claim his first Singapore Grand Prix victory this weekend, but the Australian admits his team will have to overcome Ferrari first.

Ricciardo is yet to mount the top step of the podium in Marina Bay despite a 100 per cent podium record since joining Red Bull Racing in 2014. That year he finished third, and the 29-year-old has finished second in the night race ever since.

Red Bull Racing ordinarily excels at slow and twisty circuits like Singapore’s street track, and expectations for a strong performance by the team were raised immeasurably after Ricciardo’s victory at this year’s Monaco Grand Prix.

Indeed the team had marked out the Singapore Grand Prix as one of its most likely victory prospects ahead of the 2018 season, and though the team has drifted only further away from the frontrunning Ferrari and Mercedes teams this season, Ricciardo is only half-heartedly downplaying his chances.

“Obviously we have a good chance to at least podium here,” he said. “That’s really the first target.

“I don’t want to say we’re going to win, because let’s see what happens, but we have a good chance to fight.”

Ricciardo did add, however, that his victory in Monaco wasn’t necessarily a reliable indicator of the team’s Singapore performance.

“It’s probably not as clear-cut as in Monaco. Everyone had us favourites going there, and that proved to be true,” he said. “As we’ve seen, I think the last few years we seem to be a bit stronger in Monaco than here.

“It’s a bit more power biased, this track, therefore we lose some of that advantage from Monaco — but we did get pole by a bit this year in Monaco, so I don’t know.

“At best I’d say we’re equal favourites coming into tit, but I don’t think we are the favourites, the clear favourite at the moment.

“I guess I’m just downplaying it, not to create too much spotlight. I want to win.”

Ricciardo has never won under lights in Marina Bay despite his reputation as a street-circuit specialist, though he’s finished on the podium every year since joining Red Bull Racing in 2014, including three successive second-place finishes from 2015 to 2017.

His 2019 switch to Renault is likely to take Ricciardo out of podium contention for at least next season, making this weekend’s race his last realistic chance to mount the top step for the foreseeable future.

“I’ve had too many second places here,” he said. “The reality is if I get a second here on Sunday, I won’t be ecstatic. I’m certainly chasing a win here.”

Ricciardo has left no stone unturned in his pursuit of his elusive first Singapore victory, having spent the last 10 days training for the race’s uniquely demanding conditions.

Ambient temperatures during the race regularly hover in the high-20s and humidity rarely falls further than 70 per cent. After underestimating the difficulty of the Singapore environment in his first attempt at the race in 2011, Ricciardo has developed a training regime to ensure he’s ready for the season’s most difficult grand prix.

“I just made a point after that year to overprepare for this race,” he said. “Basically from Monza until now it’s been no distractions, no commitments, no sponsorship stuff. It’s just … eating, sleeping, training.

“I’ve been training in the heat, doing some specific heat training, just so when we get here, we’re prepared.

“When we put the suit on, it’s hot and it’s uncomfortable, but I’ve been putting myself in that uncomfortable situation the last two weeks, more or less, so it doesn’t feel foreign.

“It’s a bit of a mental game as well that I’ve tried to get myself doing the last few years, and it’s worked. I see the drivers on the grid here on Sunday with the ice vests and I start to smile because I know that I’m comfortable already in the environment.

“I’m certainly prepared and excited. I feel the preparation’s been right. All I can do now is hope that it goes well, but I’m certainly ready.”