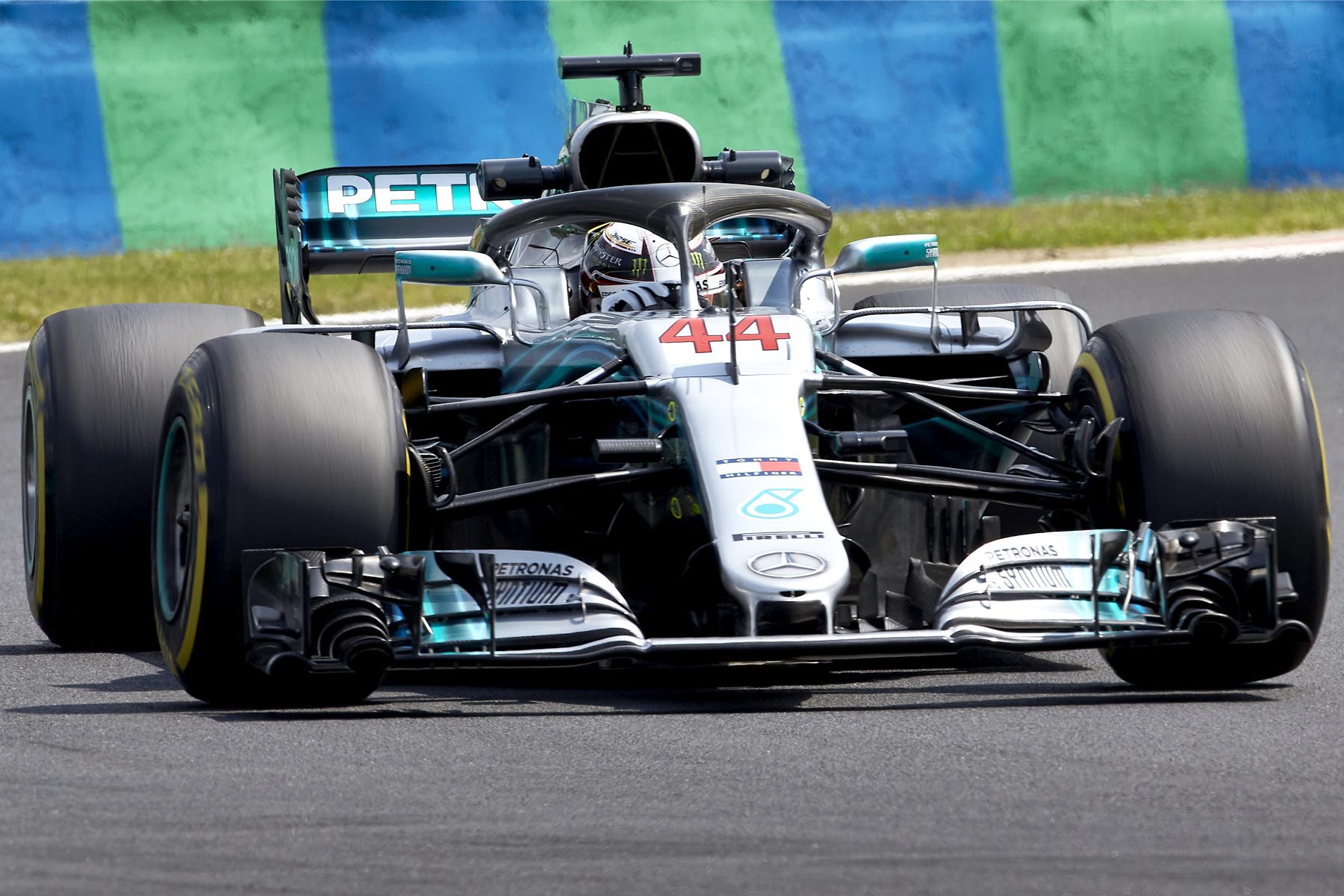 Lewis Hamilton has converted his pole position into a comfortable victory at the Hungarian Grand Prix to take a sizable championship lead into the midseason break.

The Briton was never really threatened throughout the race despite being challenged briefly by title rival Sebastian Vettel, who was using a different strategy, paving the way for the reigning world champion to claim a record sixth victory in Budapest and start his summer break with a 24-point lead.

“What a beautiful day!” he said. “An amazing job from the team.

“We came here knowing Ferrari would be really quick this weekend, but we’ll take these points as a big bonus.”

Hamilton and teammate Valtteri Bottas had locked out the front row of the grid during wet qualifying on Saturday, but Ferrari had the faster car in the dry, turning the race into an afternoon of strategic attrition.

Ferrari pair Kimi Raikkonen and Sebastian Vettel started from third and fourth, and though Vettel swept around the outside of Raikkonen at turn two on the first lap, the race was decided by Kimi and Valtteri as much as it was Vettel and Hamilton.

The top four got away to a clean start, with the only movement other than Vettel’s move on Raikkonen coming further back when Max Verstappen climbed up two places, from seventh to fifth, to make himself a factor in the battle for the podium — until on lap six his car slowed with a power unit problem, forcing him to park by the side of the track and retire from the race.

Verstappen’s teammate, Daniel Ricciardo, was also on the move, starting from 12th and charging up the field in short order, joining the top 10 by lap 11 and attaching himself to the back of the frontrunners in fifth by lap 27.

By the time he reached them, however, the strategy game had begun unfolding without him. Raikkonen had been brought into the pits for an early tyre change on lap 15 in an attempt to push Mercedes into doing the same with the second-placed Bottas, which the German marque duly did on the following lap.

With Bottas out of the way, Vettel was free to push to close the gap to Lewis Hamilton, which had ballooned to more than eight seconds. The Ferrari driver made some small gains early, but the Briton stabilised his margin at around 6.5 seconds before making his stop at the end of lap 25 for new soft-compound tyres.

That left Vettel in the lead, but with Hamilton behind him on fresher rubber the Ferrari driver was unable to build a gap over his championship rival.

Hamilton kept the new leader honest, holding the gap at around 10 seconds, until Vettel made his own stop at the end of lap 39, switching to the grippiest ultrasoft tyres.

But the Ferrari mechanics had trouble with the left-front wheel which, combined with time he lost in traffic in the laps before the stop, lost Vettel a place not only to Hamilton but to Bottas in third as well, resetting the competitive order to where it was on the first lap.

Initially, even with the ultrasoft tyres, Vettel was unable to make an impression on the immovable Bottas, who defended superbly despite being shod with the slower tyre well in excess of its life expectancy, but by lap 65 the degradation of his soft-compound rubber was too significant, and Vettel made a move at the end of the straight.

The pair ran side by side out of turn one and into turn two, and as Vettel swept around the outside of turn two, Bottas touched the Ferrari’s rear tyres, shedding some of his Mercedes’s front wing and losing third place to Kimi Raikkonen in the process.

“It was a tough race,” Vettel said. “Obviously we were a little bit out of position for the speed that we had.

“It was tricky knowing when to come in [to the pits]. Obviously we had a little bit of an issue with the pit stop.

“P2 was not really what we wanted this weekend, but I think it was the maximum we could do today.”

Raikkonen agreed that his team had achieved its maximum in the circumstances.

“I think it was the best we could hope today,” he said. “At least we got one place back.

“Fa from ideal — I think we had pretty good speed today — but what can you do? Sometimes it’s like that.”

Bottas, now fading fast, next came under attack from Daniel Ricciardo, who launched a move for fourth place around the outside of turn one on lap 68, but the Mercedes, almost completely out of grip, understeered into the side of the Red Bull Racing car, picking up more front wing damage.

Ricciardo rallied to have another attempt on Bottas on the final lap, getting the job done at turn one and dropping the Finn to fifth.

Pierre Gasly finished a superb sixth for Toro Rosso, losing only one place on his starting position to the substantially faster Ricciardo and never allowing himself to be pursued by the following Haas of Kevin Magnussen, who finished seventh.

Fernando Alonso finished eighth thanks to a slick tyre strategy by his McLaren team to get him ahead of Carlos Sainz and Romain Grosjean in ninth and 10th.