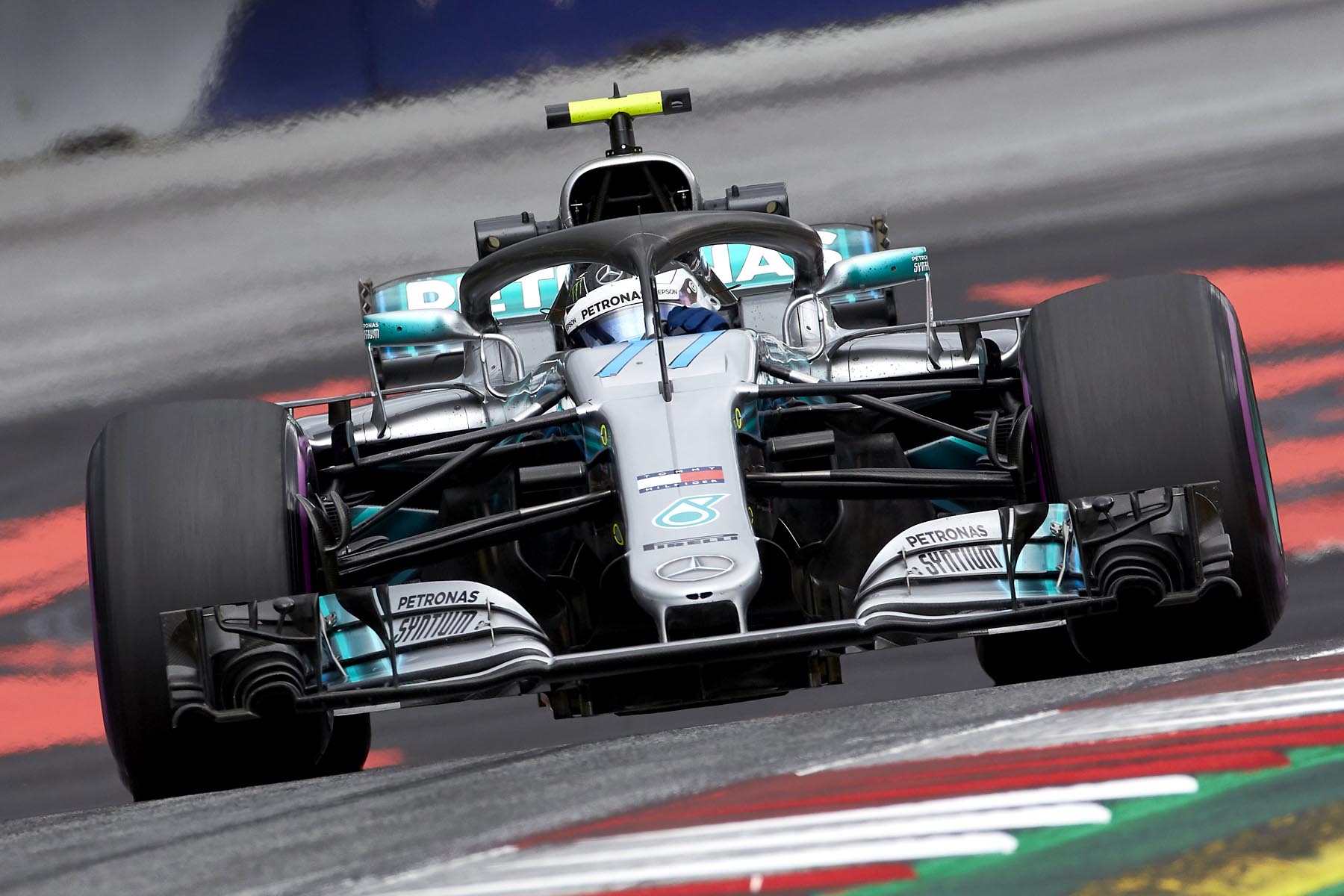 Valtteri Bottas has pipped teammate Lewis Hamilton for pole position at the Austrian Grand Prix in a dominant Mercedes performance.

Mercedes looked fastest throughout the weekend, but a scrappy first lap for Hamilton gifted the Finn provisional pole.

There were no such gifts on the second runs, however, and Bottas needed to improve his time by a tenth of a second — to a one minute 3.130 seconds, a new track record — to beat Hamilton by just 0.019 seconds.

“The whole weekend we’ve been making good progress with the set-up,” Hamilton said. “The car felt so good and on the last run I knew there was a tenth or so I could improve from the first run. Apparently I needed it.”

Bottas is yet to a win a race this season, thanks largely to misfortune striking him down at inopportune moments, but the Finn says he’s ready to claim his second successive Austrian Grand Prix.

“I just need a good, clean start,” he said. “Nothing amazing — no need to be a hero in turn one — and then go for it.

“I can guarantee I’m more hungry for a win than anyone on the grid now, so I’ll really go for it.”

Hamilton congratulated his teammate and was happy to see evidence that the team’s upgrades this weekend were delivering.

“Valtteri did a stunning lap,” he said. “On the first run I made a mistake [but] I’m really happy with the second one.

“This is a great result for the team and Valtteri deserves it.”

Sebastian Vettel qualified third but was 0.334 seconds slower than Bottas.

Vettel also made a mistake on his first lap, leaving him with it all to do the second time around, but the Ferrari driver believed he got the maximum from his car.

“It’s not easy to put it together,” he said. “I qualified in the proper position.”

But the German was later penalised three places by a stewards investigation, which found he had impeded Renault driver Carlos Sainz during Q2.

Though Sainz qualified for Q3 and both drivers accepted Vettel hadn’t seen the yellow car rapidly approaching, the stewards found the Ferrari driver had erred by slowing on the racing line, handing him a grid penalty and penalty point on his licence.

Max Verstappen was Red Bull Racing’s flag bearer in fifth for the team’s home race, but the energy drinks-backed squad mired itself in controversy, with Daniel Ricciardo accusing it of being unfair with its qualifying strategy.

The Australian set three timed laps ahead of Verstappen on track and complained over team radio that there was “no point him running” with his teammate following him closely enough to pick up a slipstream.

Red Bull Racing looked surprisingly slow throughout practice, and the fact Ricciardo qualified two places behind Verstappen is perhaps evidence of that, though he made a mistake on his final lap exiting the last corner.

Romain Grosjean sandwiched his Haas between the battling Bulls, with his teammate, Kevin Magnussen, qualifying eighth.

QUALIFYING TWO
With the top eight places occupied by Mercedes, Ferrari, Red Bull Racing and Haas, the rest of the midfield battled for the two spots remaining for progression.

Renault made relatively easy work of its rivals, however, with only Daniel Ricciardo’s failure to nail his first lap on supersoft tyres offering a glimmer of hope to would-be qualifiers before the Australian executed a cleaner lap on his second time around.

Leclerc, however, carries a five-place gearbox penalty after his car ground to a halt late in free practice three earlier in the day, promoting Fernando Alonso and Lance Stroll behind him.

Alonso will be particularly relieved given the Spaniard’s first lap was set on the less competitive soft-compound tyre and his second lap, set with the stickiest ultrasoft compound, was marred by him running wide over some kerbs and damaging his car.

QUALIFYING ONE
Force India had looked slow throughout practice and continued to struggle in qualifying despite making use of the class-leading Mercedes power unit.

Sergio Perez found himself under particular pressure anchored to last place for much of the session, and his fastest time, set on his penultimate lap, was good enough for only P17.

The Mexican, however, had another chance, but a yellow flag in the middle sector triggered by Sauber’s Charles Leclerc in the second sector meant he was unable to improve and was eliminated in 17th.

Leclerc was unaffected by the off, having already set a time fast enough to qualify for Q2, knocking Stoffel Vandoorne into the knockout zone ahead of Perez, Williams’s Sergey Sirotkin, Toro Rosso’s Brendon Hartley and Sauber’s Marcus Ericsson.

Vandoorne, Perez and Sirotkin will all up one position, however, thanks to Leclerc’s gearbox penalty.