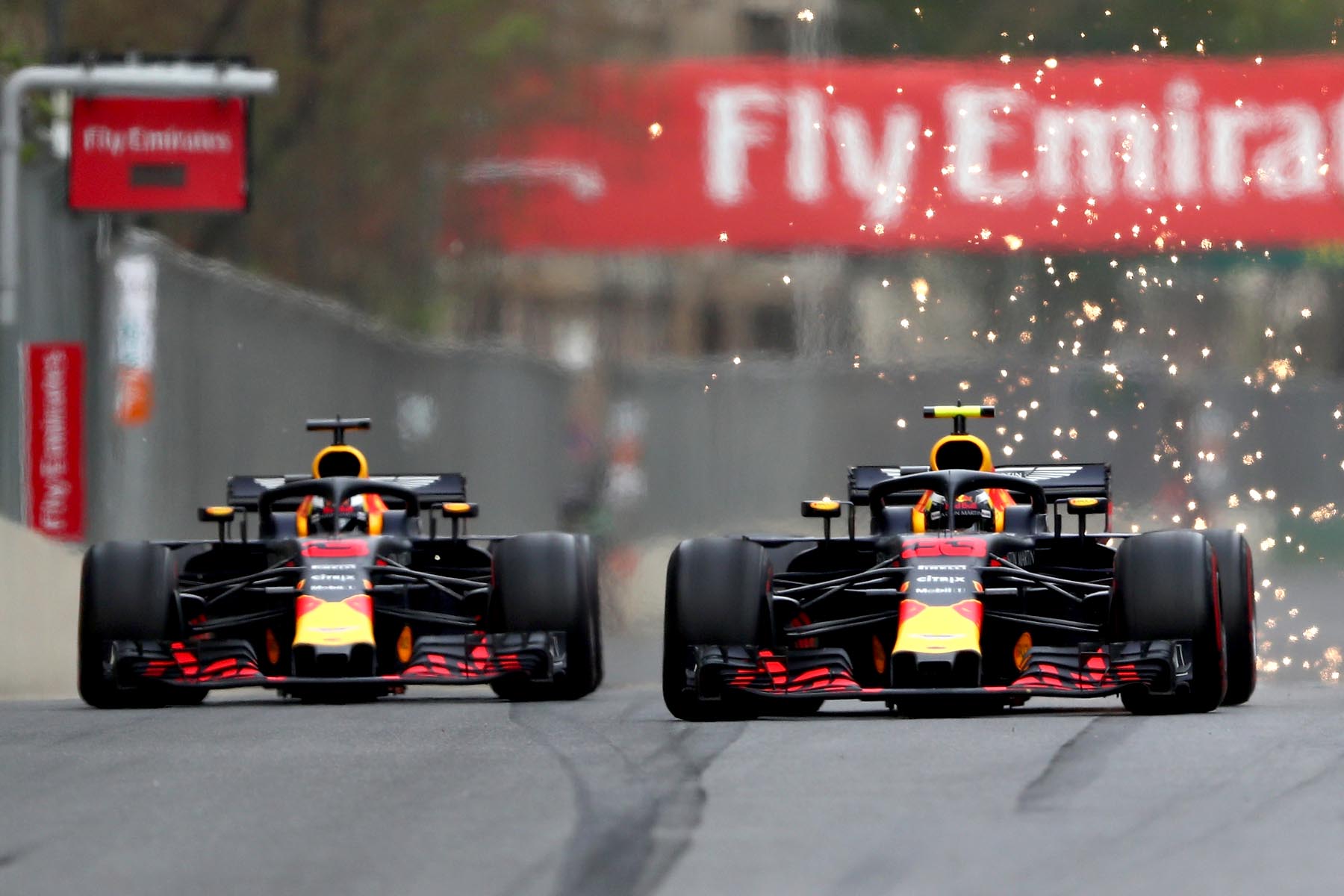 Bust-up in Baku: Why Verstappen was in the wrong

What happens when an unstoppable force meets an immovable object? Answer: neither scores any points at the Azerbaijan Grand Prix.

Daniel Ricciardo and Max Verstappen’s race-changing crash on lap 39 had an air of inevitability about it. Lacking the pace to make a fist of a fight with the frontrunners, they instead battled each other ferociously.

Ricciardo, disappointed to have let his teammate past, and Verstappen, keen to execute his first clean weekend of the year, were fuelled by pride more than anything else, and this added only more vigour to the duel.

For 35 laps the Australian was rebuffed — perhaps too forcefully; more on that later — by his teammate before getting past, but two laps later their positions had been switched back in the pits stops, forcing him to remount the challenge.

This time around their sparring ended in disaster. Ricciardo ran into the back of Verstappen’s car in the turn one braking zone, forcing both into retirement.

Team principal Christian Horner, striding from the pit wall to his office, was shaking with rage. Fuming, he blamed both drivers.

“Both were equally responsible,” he said. “What is annoying is that we’ve given away and awfully large amount of points today, [for] which we’ll be apologising to all members of staff that work so hard to put these cars together.”

It was a sign of just how severe the dressing down must’ve been that both drivers, were almost exclusively apologetic in their post-race interviews, refusing to buy into analysis of the crash.

“We’re thankful that we’re allowed to race,” Riccardo said. “It’s more just about saying sorry to the team and trying to just apologise the best way we can.”

“At the end of the day we are racing for a team and representing other people. When this happens, it is just not good enough for both of us.”

But The Roar is not bound by such team orders, so let’s ask the question: could Red Bull Racing’s Azerbaijan catastrophe have been avoided?

The context to the crash is critical to the analysis. Before the pit stop Ricciardo twice had his overtaking attempts aggressively defended against at turn one, the first example of which resulted in the two banging wheels with Daniel perilously close to the outside barrier.

Verstappen was racing Ricciardo hard. Daniel was making an effort to leave his teammate room by taking the widest possible line around turn one, but Max was showing him no such courtesy.

So Ricciardo tried the inside line instead.

He dummied wide, drawing Verstappen off his line to cover him, and then sliced back to the left to take the inside line — but the Dutchman did likewise approaching the braking zone, slamming the door on his teammate, who was already committed and had nowhere to go. They crashed.

Max refused to give his teammate room to race.

Categories of motorsport like Formula One are unusual in the broader sporting landscape in that teammates are also rivals, and with the same machinery they’re likely to compete for the same results.

It’s this quirk that gave rise to racing’s golden rule to never crash into your teammate. Some teams disallow intra-team racing to forced drivers into abiding by this edict, while others, like Red Bull Racing, operate under a commendable free-to-race philosophy — but being free to race your teammate isn’t the same as being free to race another driver.

While Daniel must accept part of the blame for committing late to his overtaking attempt — and indeed the stewards found both drivers culpable for the crash — Verstappen deserves the lion’s share of the responsibility for pushing the standards of defensive driving to breaking point against a faster car piloted by his teammate.

How the team builds from this moment collectively will be important, just as it was in the days of Mark Webber and Sebastian Vettel’s on-track feuding in years past. The good news is that Verstappen, at least in recent times, has shown he is willing to learn from his mistakes, and Ricciardo demands only that the team deals with both drivers equally.

Formula One, after all, is still a team sport. Ricciardo remembered that in Azerbaijan; Verstappen didn’t.

← Hamilton lucks into frenetic Baku win
Why McLaren is in crisis →