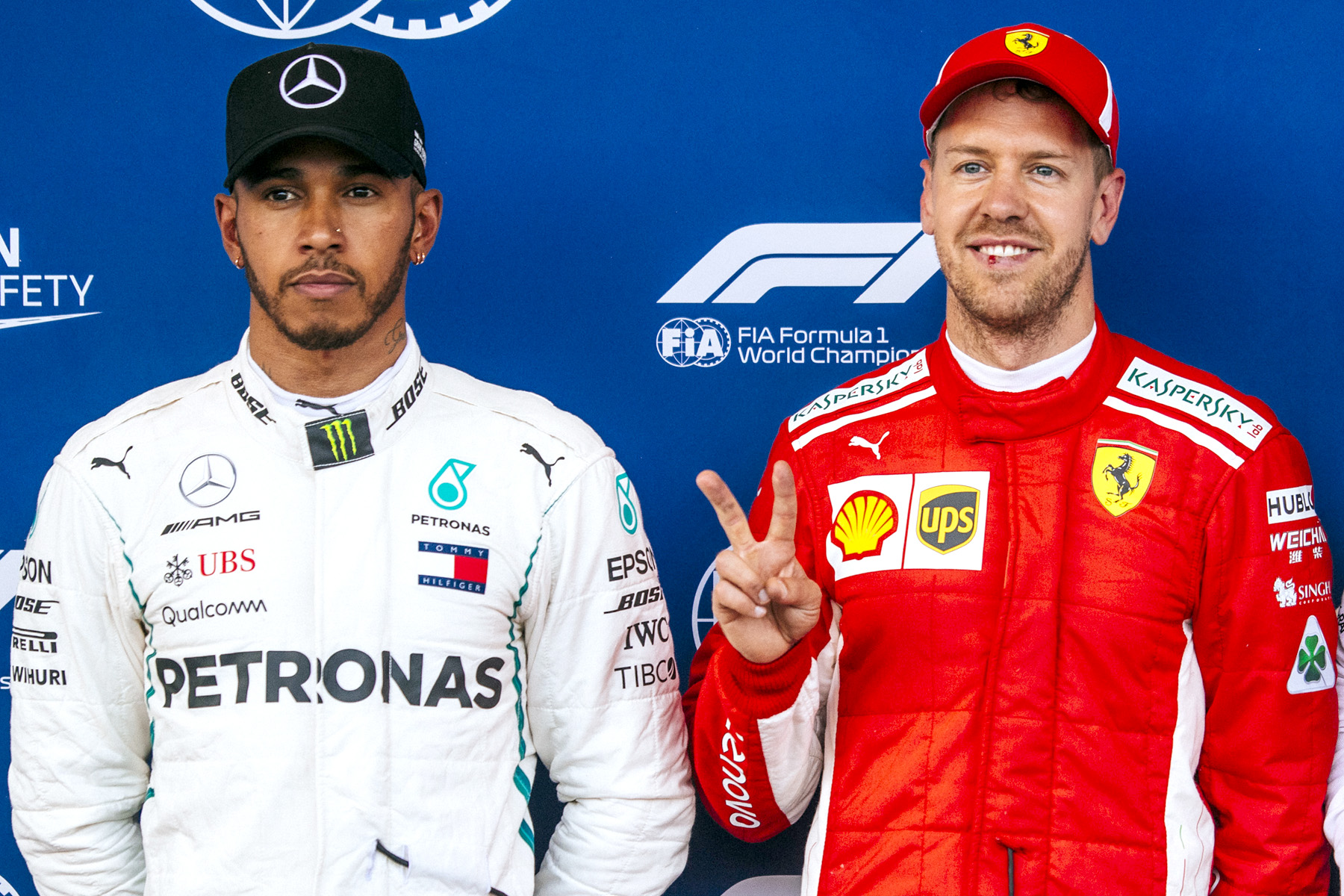 Sebastian Vettel seized his third pole in succession after a nail-biting qualifying session in Azerbaijan.

Vettel held provision pole position after the first runs, but a lock-up on his second attempt left him vulnerable to attack from his teammate, Kimi Raikkonen, and a resurgent Lewis Hamilton in his Mercedes.

But Raikkonen made an error in the final sector and Hamilton could only improve enough to get within 0.179 seconds of the German, securing him his 53rd pole position.

“In the last segment of qualifying I knew I had the car that does what I want,” Vettel said.

“I knew on the second run the track would ramp up. I was a little bit faster, but then I locked up — it caught me by surprise for turn three.

“The first lap I was really happy. Fortunately it was enough.”

Hamilton, rejuvenated after his team salvaged his car’s troublesome performance on Friday to give him the chance to vie for pole, said he believed a victory could now be within reach too.

“That was close!” he exclaimed. “We did the best job we could, it was very, very close.

“We’re in the mix. This is the fifth-best track to overtake, so I’m going to try to give Sebastian a hard time tomorrow.”

Valtteri Bottas was 0.15 seconds behind Hamilton in the sister Mercedes and likewise had his eyes on the main prize, hoping a chaotic race in the style of last year’s event could get him there.

“The race here can be really crazy,” he said. “Last year I was one lap down after lap one and ended up second, but at least now we have a good starting point.”

Red Bull Racing’s Daniel Ricciardo and Max Verstappen qualified fourth and fifth — one place higher apiece than could have been expected thanks to Raikkonen’s final-lap qualifying error — but were both confident that their car’s race pace will put them in the victory mix on Sunday.

Raikkonen was a disappointed sixth after being unable to deliver on the pole-winning promise of his earlier qualifying form.

The Finn topped the first two qualifying segments and was on track to snatch P1 from his teammate with a strong final flyer, but the car snapped from underneath him out of turn 16, losing him more than a second by the finishing line near the end of the long front straight.

Esteban Ocon led Sergio Perez for a Force India fourth-row lockout. The duo was a second off pole position but half a second up on Renault’s Nico Hulkenberg and Carlos Sainz.

Hulkenberg, who qualified ninth, will start the race from 14th after serving a gearbox change penalty.

QUALIFYING TWO
Williams drivers Lance Stroll and Sergey Sirotkin missed out their first top-10 berth of the year by less than half a second, with Stroll ending his afternoon within a tenth of Q3.

It was an impressive performance for the independent English team, which has struggled all season with straight-line speed — and the result will have felt all the more sweet for having beaten Fernando Alonso in the process, the Spaniard qualifying 13th, confirming McLaren as the slowest Renault-powered car for the fourth race in a row.

Alonso had the grunt to outpace only Sauber’s Charles Leclerc in P14 and Haas’s Kevin Magnussen in P15, though both Fernando and Leclerc will gain a place from Nico Hulkenberg’s gearbox penalty, was will Stroll and Sirotkin

QUALIFYING ONE
Stoffel Vandoorne, piloting the sister McLaren, similarly outqualified a Sauber and a Haas car, but he did so from the confines of the bottom five, compounding a difficult weekend to date for the Belgian.

But Toro Rosso’s Pierre Gasly had a greater reason to be frustrated, the Frenchman furious to have qualified 17th after he was forced to abort his final hot lap to avoid colliding with his teammate, Brendon Hartley.

The Kiwi was moving slowly in the middle of the track between turns 12 and 15, one of the fastest parts of the circuit, when he was caught unaware by his teammate closing behind him.

Gasly’s avoiding action, taken after Hartley momentarily moved in the same direction, saved the team from a catastrophic crash, for which Brendon later apologised.

He qualified 19th without a representative time, and Sauber’s Marcus Ericsson qualified between him and Gasly in P18.

Romain Grosjean made an early qualifying exit, retiring after just five minutes with a “locked gearbox”, qualifying last without a time.