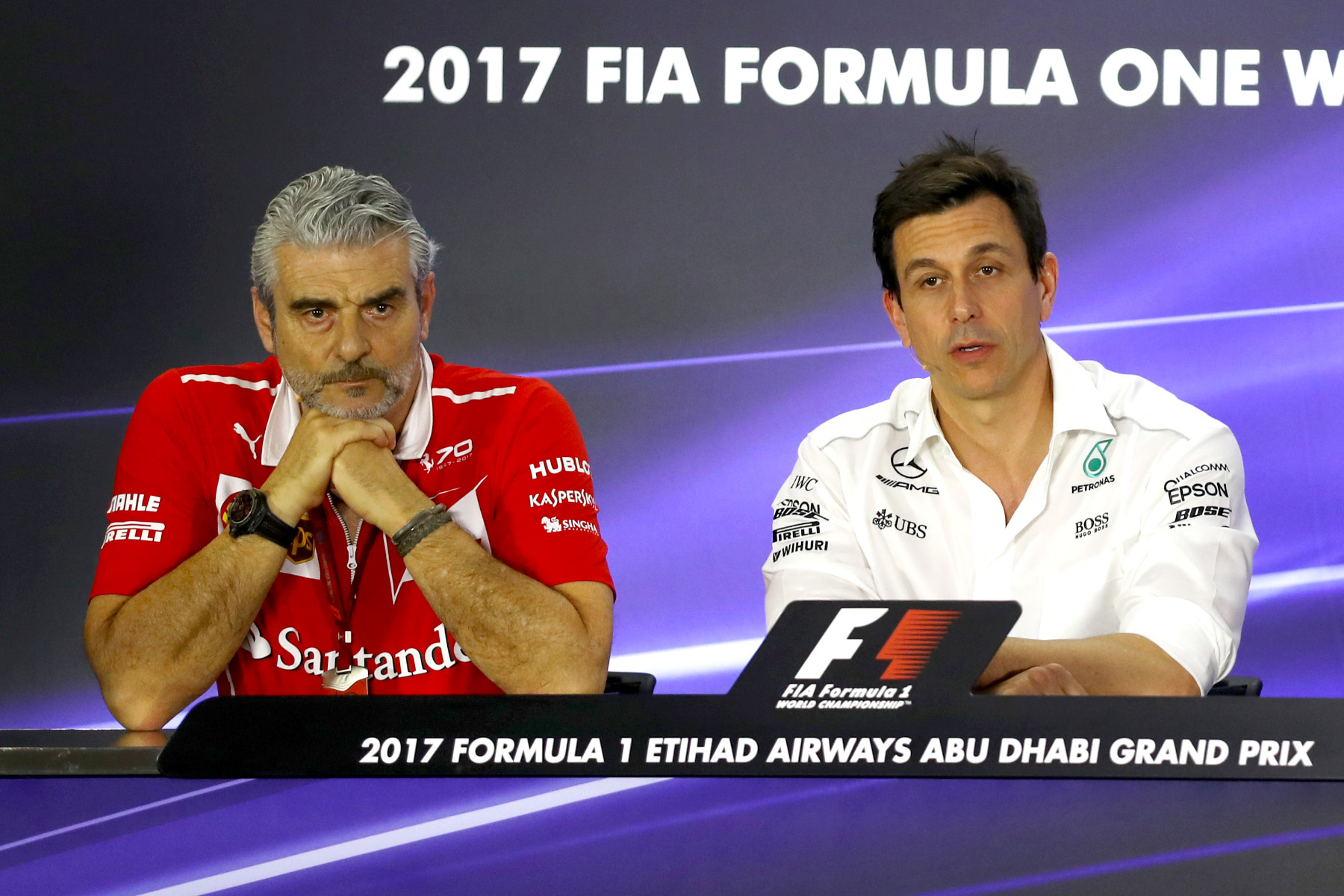 A failed coup: the constructors stories of 2017

By design the 2017 season and its new regulations was supposed to end Mercedes’s three-year reign atop the sport, but by the year’s end both Lewis Hamilton and the Silver Arrows had claimed their fourth respective titles.

But to say the sport had delivered up more of the same would be wrong — the 2017 season proved a breath of fresh air and hinted at a new golden era on the horizon.

FERRARI FAILS TO FIRE
Only the most ardent of Ferrari fans would have suggested the Scuderia could have mounted a 2017 title challenge — but that Ferrari magic works both ways, and the mercurial Italian team delivered a car that proved a match for Mercedes for much if the season.

Cautious optimism met victory in round one in Australia, but week after week Ferrari proved its doubters wrong to keep up with Mercedes, and just three points separated Sebastian Vettel and Lewis Hamilton after 13 rounds.

“The step that we have done this year was incredible,” Sebastian Vettel said. “On all fronts I think it has been outstanding.”

Driver error in Singapore and a string of mechanical problems thereafter deprived Vettel of his chance to close the deal, but it would be foolish to think Ferrari was ever in contention for the constructors title. Signing the once great Kimi Räikkönen, now in the fourth year of his Ferrari-funded superannuation tour, made sure of it.

While it is important to pay credit to another classy Mercedes performance in 2017, particularly after it worked hard to overcome its early season difficulties to win back consistency, Räikkönen’s damning 100-point deficit to Valtteri Bottas was the real championship killer.

RB13 — UNLUCKY FOR SOME
Red Bull Racing launched its RB13 with the tongue-in-cheek tagline ‘unlucky for some’. The ‘some’ turned out to be the team’s 700-strong staff.

The car delivered 13 DNFs, and with each car on average scoring 13.5 points per finish, those retirements equate to 175.5 lost points — enough to have overhauled Ferrari for second place.

But there is more to RBR’s season than mechanical retirements. The truth for the team that challenged for victories late in the season is that it wasn’t quick enough out of the blocks.

Christian Horner, sticking to type, sought to pin the blame on Renault, but even he was forced to admit the team suffered wind tunnel correlation issues it failed to identify until the opening round of the season. By the time it rectified the problems, Horner reckoned, the team had lost up to two and a half months of development time.

Knowing a stronger start could have made it a title dark horse, RBR is pushing hard early on the RB14. It’ll be an important car, too, with Daniel Ricciardo pinning his tenure with the team beyond his 2018 contract on its championship credentials, increasing the stakes for another year of missed opportunity.

McLAREN PUTS HONDA IN THE BIN
The sad spectacle of the revived McLaren-Honda partnership has ended after three baron campaigns.

Honda stands accused of wasting years of the careers of world champions Fernando Alonso and Jenson Button, while McLaren will live with — though perhaps not unhappily — having unedifyingly kicked the Japanese company to try to embarrass it into leaving Formula One for good.

Only the work of the FIA and F1 management convinced Honda to stay by striking a deal with Toro Rosso, in turn freeing up a Renault engine supply for McLaren in a relatively happy compromise.

The Woking squad’s season has been of genuine intrigue aside from the politicking, however, with car occasionally delivering head-scratchingly good results to defy what ought to have been the package’s limits.

McLaren put this down to its chassis, which it has periodically described as amongst the best on the grid, while Alonso has frequently touted his 2017 races as the best of his career.

It marks 2018 as a stringent test, then. With Red Bull Racing, McLaren and the Renault works team all propelled by the same engine, F1’s second most successful team and arguably the generation’s best driver will have nowhere to hide in the new year.

A MIDFIELD OF MIXED FORTUNES
Despite the closeness of the 2017 midfield all teams from P4 in the constructors table down finished in the same order in which they ended 2016 bar McLaren and Renault.

McLaren dropped three places thanks to Honda’s woeful performances, while Renault developed extremely strongly to improve by three places, banishing the memories of its underwhelming 2016 and looking to a future of podium contention, perhaps from next season.

Force India, an impressive fourth place — notably the points total of either of its drivers would have been enough to secure this position of Williams — has the most to be worried about. The budget for Vijay Mallya’s Silverstone-based team pales in comparison to Renault manufacturer might, meaning the squad with the best dollar-for-dollar outcomes in the sport has the fight of its life on its hands next season.

Toro Rosso’s campaign was undone by a series of disruptive driver rotations, and though Brendon Hartley and Pierre Gasly are drivers with bright F1 futures, Carlos Sainz’s trade to Renault and Daniil Kvyat’s merciless axing deprived the team of the experience that might have saved it its four-point defeat to Renault in the constructors standings.

HONOURABLE MENTION
Haas maintaining eighth in the constructors standings and being within a shout of sixth at the Abu Dhabi finale is a commendable achievement — its 2017 car is the first it had to design while concurrently racing and developing another active car, yet it scored a 18 points more this year over last.

DISHONOURABLE MENTION
Williams continued its alarming slide backwards despite the new regulations. Felipe Massa was the team’s consistent base alongside teenage rookie Lance Stroll, who continues struggling to find his feet — though the Canadian’s cool and calm drive to third place in the chaotic Azerbaijan Grand Prix earnt the team an invaluable 15 points.

← Pirelli deserves better from Formula One
Class of the field: how the drivers fared in 2017 →