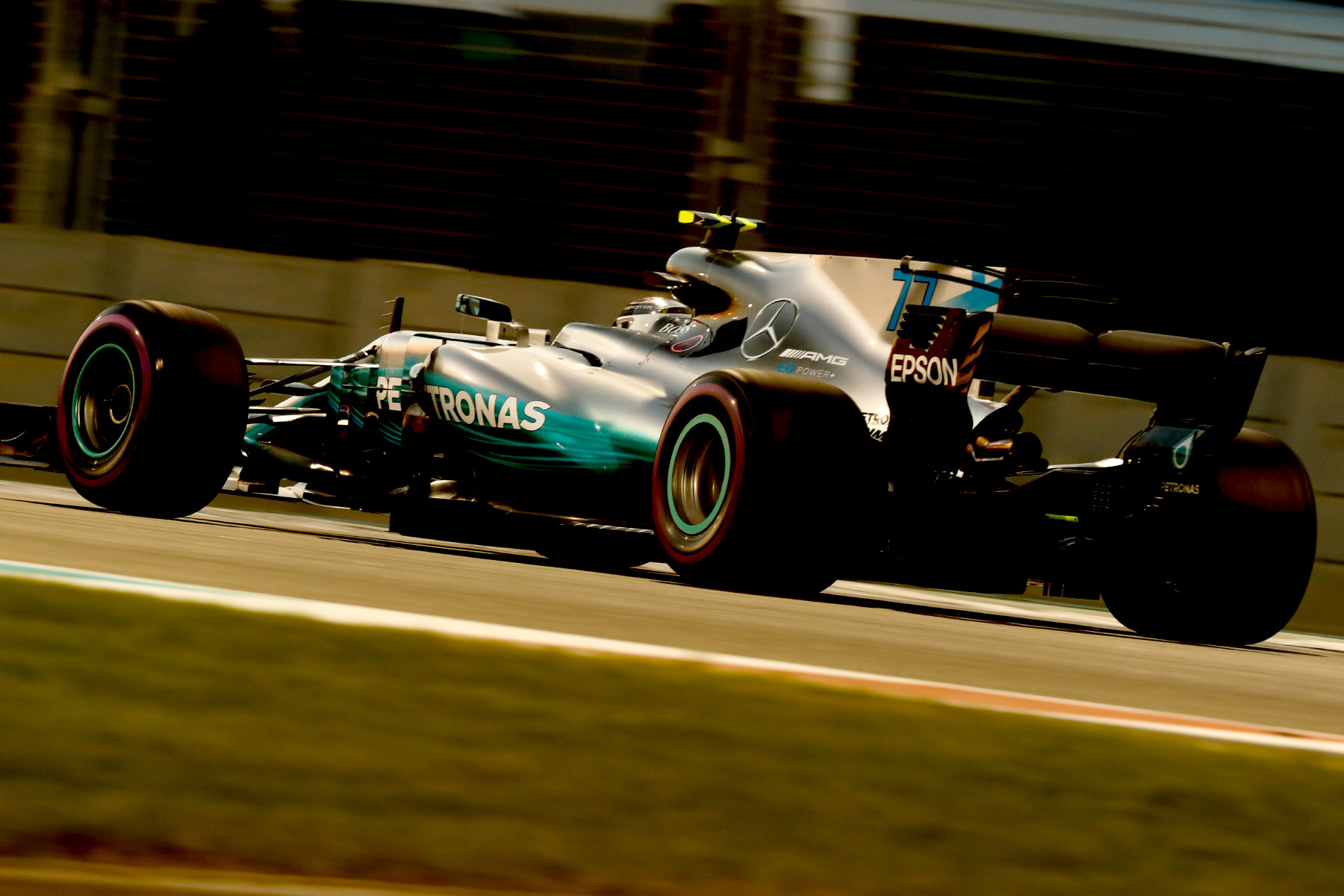 Valtteri Bottas has won his third Formula One race with a cool and collected drive from pole position at the season-ending Abu Dhabi Grand Prix.

The 2017 finale was a sedate affair around the notoriously unraceable Abu Dhabi track, so once Bottas pulled away cleanly from the front of the grid and defended against teammate Lewis Hamilton at the first turn, half the job was done.

Indeed the entire top 10 pulled away from the line in qualifying order, and the difficult-to-pass Yas Marina Circuit ensured they stayed that way in the opening phase of the race.

Slowly the gaps opened up to beyond one second, spreading out most of the field with the exception of one or two drivers who found themselves with machinery better disposed to racing than performance over a single lap.

Romain Grosjean engaged in a mighty scrap with Lance Stroll for 13th place, but some ace defensive work by the Canadian teenager held the Frenchman back until lap 13, after which Stroll made the race’s first pit stop for fresh supersoft tyres.

The stop, angled at giving the Dutchman an undercut advantage, triggered Räikkönen’s sole stop on the next lap. The Ferrari driver’s stop was slower than that of his rival, but when Verstappen became caught behind Force India’s Esteban Ocon, the Finn was able to emerge from pit lane unchallenged.

Ricciardo was the next driver to pit — the Australian suspected he had picked up a puncture — but Sebastian Vette, who was one place ahead of him in third, was able to cover by stopping on the subsequent lap.

Daniel’s Red Bull Racing car lasted only another lap on track, however, after which a hydraulic issue ground his machine to a halt on the track, prompting double waved yellow flags.

Mercedes stopped race leader Bottas on lap 22 as a precaution against a safety car, splitting strategies with teammate Hamilton, who was left out for three laps.

A combination of traffic and running older tyres meant the Briton emerged from the pits further behind the Finn than before the pair had stopped, but rapidly he closed onto the back of the sister car, and by lap 28 the fight looked on.

But Bottas held his nerve and re-established a 1.5-second lead to keep himself out of DRS range, and though Hamilton threatened to slice those crucial last tenths off the gap in the final 10 laps of the race, Valtteri was never really challenged again.

“It is really, really important for me after having pretty difficult after the second half of the year,” Bottas said, referring to his sharp downturn in form after the midseason break. “I’ve been working hard on all the issues and getting better and better with everything.

“This week — pole, win — couldn’t be happier to end the season like this.”

Hamilton said he simply didn’t have the pace to beat his teammate, instead waiting for a crucial mistake that ultimately never came.

“Big congratulations to Valtteri,” he said. “He did an amazing job today to hold me off.

“I just gave it everything on every single lap. It’s very hard to overtake here.”

Hamilton also paid credit to his Mercedes team, which won its fourth constructors title alongside his fourth drivers championship this season.

“I just want to say a big thank you to the team. What they’ve produced for us this year is incredible. It’s an honour to race for them.”

Vettel finished third, albeit 15 seconds off Bottas’s lead on a circuit that ought to have suited the Ferrari.

“After three, four, five laps I just couldn’t go any faster,” he said. “They seemed to pull away.

“It was pretty lonely. I think we had stronger pace in the second part of the race but not enough to match those two guys.”

The last matter of interest in Abu Dhabi was the settling of the battle for sixth place in the constructors standings.

Toro Rosso led Renault and Haas for the place by four and six points respectively before the race, but Renault undoubtedly had the superior car on the weekend, with Nico Hülkenberg being the only driver among the six to qualify in the top 10.

Simply finishing seventh, where he qualified, would be earn Hülkenberg and his Renault team enough points to overhaul Red Bull’s junior team, but the race proved fraught for the French manufacturer.

Hülkenberg was handed a five-second penalty for passing Force India’s Sergio Perez off the track on the first lap, and after the pit stops his teammate Carlos Sainz emerged with a loos front-left wheel, forcing him into retirement.

Hülkenberg, however, drove a strong race, picking up one position for sixth when Ricciardo retired from P4, earning him eight points and Renault its sixth-place prize in the constructors standings.

Sergio Perez and Esteban Ocon finished seventh and eighth for Force India ahead of Fernando Alonso in McLaren’s last race in partnership with Honda and Felipe Massa in the Brazilian’s final Formula One grand prix.