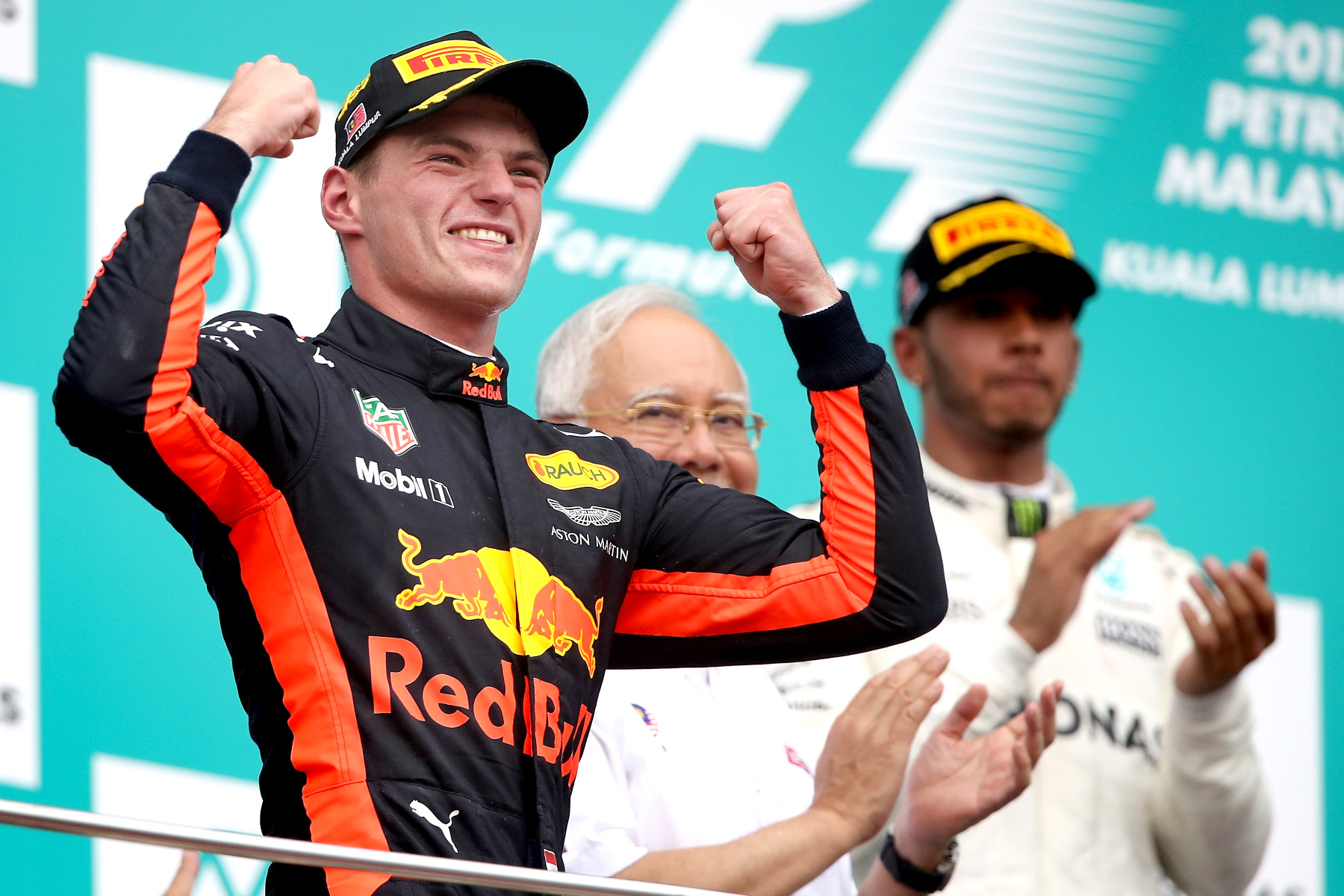 Max Verstappen has won his second Formula One grand prix with a faultless performance in Malaysia, but Sebastian Vettel was the race’s star, recovering from last to fourth in a meteoric drive.

Verstappen made a sizzling start from second place — second-place qualifier Kimi Räikkönen was withdrawn from the race with a power unit problem — to harass pole-sitter Lewis Hamilton for the lead, and after spending four laps within one second of the Mercedes the Dutchman sliced past the leader through turns one and two.

From there it was an easy cruise for Verstappen. His Red Bull Racing car had superior race pace compared to Mercedes, and with neither Ferrari car in a position to challenge him, he sprinted to the chequered flag unopposed.

“In the beginning the car felt good and I saw Lewis was struggling a bit with traction,” Verstappen said. “From there I drove my own race.”

Despite exhibiting impressive pace so far this season, Verstappen had suffered a 50 per cent retirement record in 2017 before this weekend, making the result, his first win since last year’s Spanish Grand Prix, particularly sweet.

“It’s amazing,” he said. “This is a very tough race, but of course incredible to win.

“Especially after the season I’ve had; I think this victory came at a very good time. I was very happy when I crossed the line.”

Hamilton complained of derating — his power unit dropping power to recharge the battery — early in the race when Verstappen passed him, but thereafter the Briton presented little challenge, knowing finishing in front of Vettel was all that mattered for his championship result.

“The race was a tough one,” he said. “Obviously they just had the upper hand on us today.

“I feel good, but I think we’ve got some work to do with the car. Obviously we didn’t have the pace today with the car. We’ve just got to keep pushing.”

Though the battle for victory was decided after the first five laps, the fight for the last podium place went down to the wire, with Sebastian Vettel’s epic recovery drive playing a major part in permutations.

Daniel Ricciardo was the incumbent after passing Bottas for third place on lap nine. The Finn, as was the case in qualifying, was woefully off the pace for the entirety of the race, counting himself out of the podium early.

The time Ricciardo lost behind Bottas deprived him a shot at a higher place, but the Australian was unable to rest easy in third, with the low-starting Ferrari promising to threaten the position from early in the race.

Vettel steamrolled the midfield from the back of the grid — the German was forced to start last after power unit problems denied him a chance to qualify — and by lap 22 he had made it up to fifth place to set his sights on Bottas.

Rather than overtake the Finn, Vettel stopped for new tyres on lap 28, undercutting Bottas and taking fourth place when the Mercedes stopped one lap later.

Ricciardo was the last of the front-runners to make his pit stop, doing so on lap 30 and emerging from the pits with a 15-second lead over Vettel — but Vettel, having opted for the contra-strategy at the start of the race, had the supersoft tyre equipped against Ricciardo’s soft, giving him a pace advantage.

The German was relentless in his pursuit of Ricciardo, cutting the deficit by a second per lap 46 to begin pressuring the Red Bull Racing car for the podium.

Lap after the lap the former teammates sparred, dodging lapped traffic along the way, but with three laps to go Vettel’s challenge faded, his softer tyres shot from harassing the immovable Ricciardo.

“I was behind Bottas for a few laps and obviously tried to get him as soon as possible, but he defended well,” he said. “Seb came so quick at the end, I thought I was going to have a handful, but there was only really one attack and I managed to pull away.

“It’s nice to get a podium; a good race for the team.”

Vettel was nonetheless pleased with his recovery drive, and with Hamilton finishing only second, the Briton extended his championship lead by only six points, to 34 points, over him, keeping the drivers title within reach for Ferrari.

Vettel’s strong drive was soured, however, but his cool-down lap, when he had a bizarre crash with Williams driver Lance Stroll.

The pair were attempting to add weight to their cars by running over bits of rubber and debris on the outside of the track, as is standard practice, but they accidentally steered into each other, ripping Vettel’s left-rear tyre off the car.

Though each driver blamed the other, the stewards found neither was “wholly or predominantly to blame”.

Bottas has struggled for pace since his last victory at the Austrian Grand Prix in June, and this latest result will precipitate some deep soul-searching from the Finn.

Sergio Perez finished comfortably in seventh despite racing with an illness, but equally impressive was Stoffel Vandoorne’s drive to seventh place in his McLaren Honda.

The Belgian held his qualifying position — earning a place after Räikkönen withdraw but losing one to the resurgent Vettel — to leap ahead of teammate Fernando Alonso to P14 in the drivers standings.

Stroll finished eighth ahead of Williams teammate Felipe Massa, and Force India’s Esteban Ocon recovered to P10 after pitting at the end of the first lap with a puncture, completing 53 laps on a single set of tyres.

← Bottas mystified by decreasing quali pace
Is Felipe Massa the right man to lead Williams in 2018? →