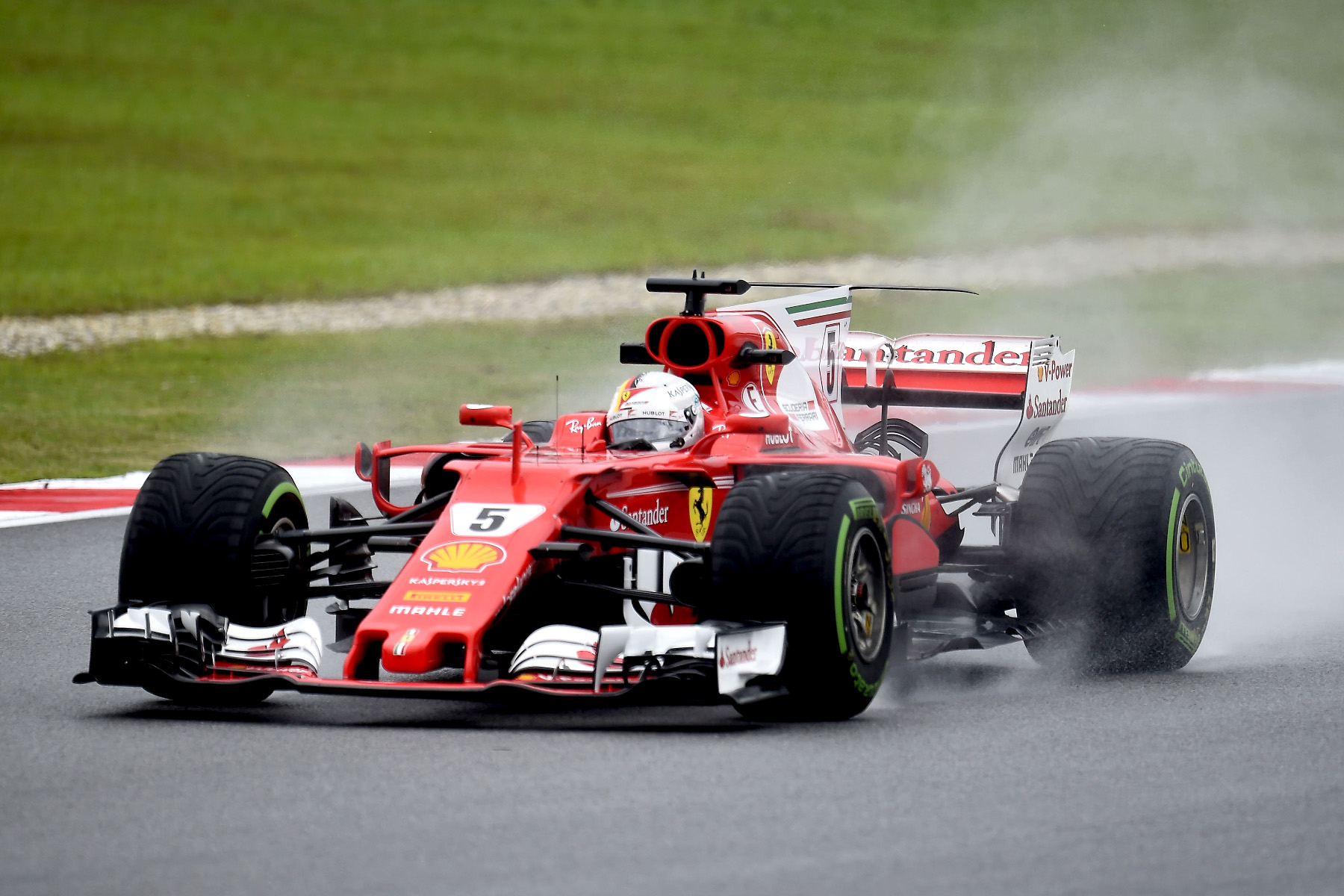 Vettel fastest on difficult Friday for Mercedes in Malaysia

Sebastian Vettel has emphatically bounced back from his first-lap Singapore crash by dominating Friday practice at the Malaysian Grand Prix.

The Ferrari driver set an all-time lap record — his benchmark of 1 minute 31.261 seconds bested the previous bar by 1.3 seconds — and was more than half a second faster than his teammate, Kimi Räikkönen.

More important, however, was that Vettel obliterated championship leader Lewis Hamilton’s best effort for the day by 1.4 seconds.

Hamilton’s time was good enough for sixth place, one ahead of teammate Valtteri Bottas, and both Mercedes drivers complained of a lack of grip all afternoon.

Worse for the silver arrows, the team leading the constructors standings by 102 points, is that both Red Bull Racing drivers and McLaren’s Fernando Alonso were able to slot between Hamilton and Bottas and the leading Ferrari pair.

Mercedes struggled similarly in Singapore, where the hot conditions on Friday and Saturday put it behind Ferrari and Red Bull Racing. Only when the rain cooled and cleaned the circuit on Sunday was Hamilton able to exercise his car’s speed.

Friday in Malaysia was a truncated day for the teams, with the first 30 minutes of the morning session cancelled due to a thunderstorm deluge over the circuit and the final 20 minutes of the afternoon session red-flagged by a crash.

Romain Grosjean triggered the late suspension after a high-speed smash between turns 13 and 14.

The Frenchman drove his Haas car over the inside kerb at turn 13, where a loose drain cover dramatically punctured his rear-right tyre, sending him spinning out of control into the barriers.

Grosjean was unhurt, but his car was severely damaged.

The weather forecast remains a major issue for the race weekend. Conditions are expected to become increasingly unsettled through to Sunday, when rain is almost certain to affect the race.

Red Bull Racing in particular looked comfortable in the wet morning session, with a 1.6-second margin to the next-quickest car underlining its supremacy in mixed conditions, while Alonso’s performances in both sessions — third in FP1 and fifth in FP2 — suggest the low-grip conditions could favour his McLaren.

Of further interest on Friday was the entrance of a number of rookies into free practice one, including new Toro Rosso driver Pierre Gasly and Ferrari juniors Antonio Giovinazzi and Charles Leclerc.

Gasly replaced Daniil Kvyat suddenly during the week and is expected compete until at least the United States Grand Prix in October before assuming Carlos Sainz’s seat in 2018 when the Spaniard moves to Renault.

Kvyat, on the other hand, is likely to return to his seat by 2018 given the Red Bull junior driver programme has no drivers eligible for promotion to Formula One.

Giovinazzi, who borrowed Kevin Magnussen’s Haas, and Leclerc, who substituted Marcus Ericsson at Sauber, both compared favourably to their temporary teammates, with the former finishing just 0.1 seconds behind Grosjean and the latter 0.3 seconds ahead of Pascal Wehrlein.

Both are in the frame for a full-time Sauber drive next season, but rumours that both current drivers at the Swiss team will be replaced to accommodate the two Ferrari juniors continue growing apace.

CHINESE GRAND PRIX RENEWED
Earlier on Friday Formula One confirmed that the Chinese Grand Prix would remain on the calendar for a further three years after protracted negotiations to keep the Shanghai race.

The Chinese Grand Prix contract expired after this year’s April event, but with the race growing in popularity during its 14-year tenure and with the sport’s new commercial rights holder keen to ensure a presence in the world’s most populous nation, the contract extension was expected.

“This great country has already demonstrated an overwhelming show of interest in our sport,” said F1 CEO Chase Carey. “We firmly believe there is still a great deal of unexplored potential here.

“That’s why this renewed agreement is so important as part of our development strategy, especially in this part of the world.”

Jiang Lan, chairman of the group tasked with running the event, said the race added prestige to Shanghai’s international image.

“The Formula One Chinese Grand Prix has become a motorsport showpiece for China but also a fixture for all Asia Pacific and global motorsport fans,” he said.

The 2017 Shanghai race will run on 15 April next year, swapping its provisional 8 April date with the Bahrain Grand Prix to avoid a national holiday in China that might have had a negative effect on attendance.