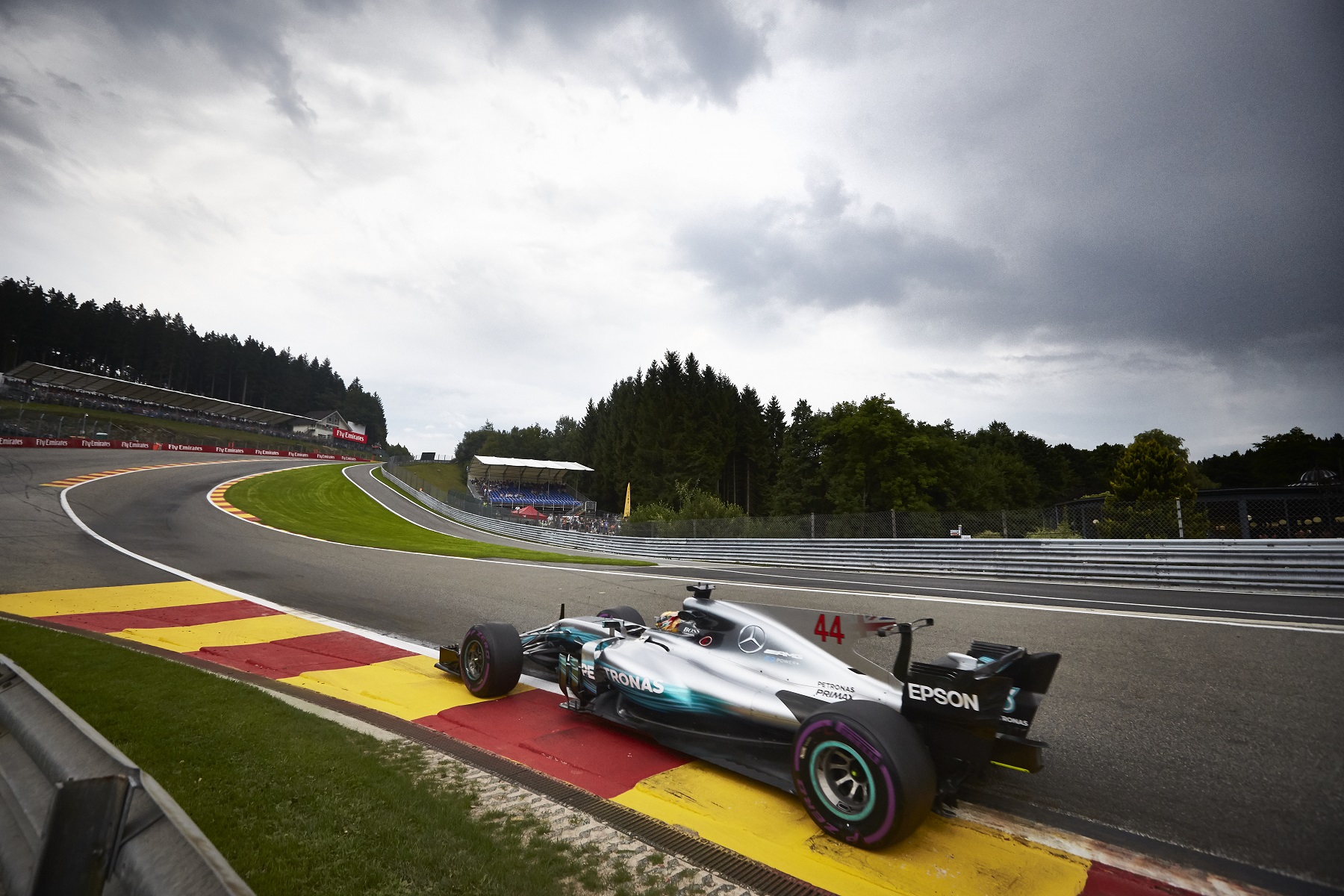 The Briton’s 68th career pole position looked easy, with his Mercedes at home at the Circuit de Spa-Francorchamps and the driver unchallenged, putting a 0.25 buffer between him and his rivals.

The gauntlet was set when Hamilton dominated the first runs, putting 0.36 seconds between his Mercedes and Kimi Raikkonen’s Ferrari and almost half a second ahead of teammate Valtteri Bottas.

Sebastian Vettel, concerning early on, was 0.519 seconds further back after an afternoon off the pace.

Hamilton shaved almost 0.4 seconds off his time on his second lap which, despite Vettel improving by 0.6 seconds, put the result beyond doubt.

“I have to say a big thank you to my team,” Hamilton said. “The team have done an amazing job.

“This is one of my favourite circuits, so to come here and put a lap together like that, it’s a dream.”

Hamilton was delivered a message from the Schumacher family via F1 sporting boss Ross Brawn after climbing out of the car, and the Briton said he was touched by the gesture.

“To hear the message that Ross just gave, i just have to say a big thank you,” he said.

“I pray for Michael and his family all the time. I’ve had the privilege of racing with him and have always admired him.

“I’m just honoured to be up with him now in the poles, but he’ll still be one of the greatest of all time.”

Vettel pulled his weekend out of the fire with a blistering final lap, but the German said it was difficult to expect any more to come from his car on a circuit that was never expected to suti Ferrari.

“It was the right time,” Vettel said of his last-gasp lap. “I lost that feel a little bit … but the last lap the car was more alive.

“I was a bit lucky with Kimi who had to abort the lap and gave me a nice tow.”

Vettel took solace too from Ferrari’s strong long-run pace after Friday practice, which could put him in a favourable position starting from the front row.

“So far it has been looking pretty good, so I hope we can keep it up,” He said. “Let’s see what we can do with the strategy tomorrow as well. We have the speed and we should have it in the race.”

Valtteri Bottas was a surprisingly distant 0.541 seconds off his teammate’s pace in third, but the Finn was at least 0.2 seconds ahead of Raikkonen on the second row after the elder Finn made a mistake in the middle sector.

“Of course it would’ve been nice to be on pole for tomorrow, but it’s still not a bad starting place,” Bottas said. “I was aiming for pole, but to be honest Lewis was doing an absolutely amazing job all week.”

Max Verstappen outqualified teammate Daniel Ricciardo for the eighth time this season, the pair in fifth and sixth and separated by half a second.

Jolyon Palmer’s session expired almost immediately when the Briton, who was looking good to outpace teammate Nico Hulkenberg this weekend, pulled to the side of the track with smoke pouring from the back of his Renault.

QUALIFYING TWO
The second qualifying segment turned into a shootout between Force India, Renault and McLaren for a Q3 berth, though only the former two teams could lay any legitimate claim to a top-10 spot.

McLaren, perennially down on power thanks to its Honda engine, attempted the oft-maligned slipstream with its two drivers to compensate for the car’s lack of speed at one of the most power-sensitive circuits on the calendar.

Stoffel Vandoorne, who carried a ludicrous 65-place grid penalty into qualifying for a series of engine part and gearbox changes, obliged to assist Fernando Alonso, allowing the Spaniard to set a first sector time half a second quicker than that of his teammate and just 0.4 second slower than Hamilton’s leading Mercedes.

It was a strategy good enough to get Alonso into the top 10, but it proved only temporary, and the Spaniard, frustratedly shouting, “No power!” over team radio, was knocked out by 0.1 seconds.

Haas teammates Romain Grosjean and Kevin Magnussen were one and two-tenths further back respectively, while Toro Rosso’s Carlos Sainz was disappointed to set the slowest time of the session for 14th place.

Stoffel Vandoorne, knowing no performance would negated his penalty, didn’t set a time.

QUALIFYING ONE
Rain on Friday afternoon ensured that the Circuit de Spa-Francorchamps was still evolving in qualifying, placing a high value on laps set later in the session.

McLaren utilised its slipstreaming to ensure both cars made it out of the bottom five, Alonso sneaking ahead of Vandoorne in 13th and 14th, escaping the knockout zone.

Williams was found to be wanting on an increasingly dispiriting weekend for the English team. Massa in particular, returning from an illness that had him sit out the Hungarian Grand Prix, missed all of Friday practice after crashing 15 minutes into the morning session and then picked up a five-place grid penalty for ignoring yellow flags in Saturday morning practice.

The Brazilian was at risk of being eliminated all session, but he set a last-gasp time to go P15 at the fall of the flag. A sizzling lap by Carlos Sainz, however, knocked him into P16 and out of qualifying.

Lance Stroll in the other Williams picked up some rear wing damage, which left him stranded one second behind Kvyat.