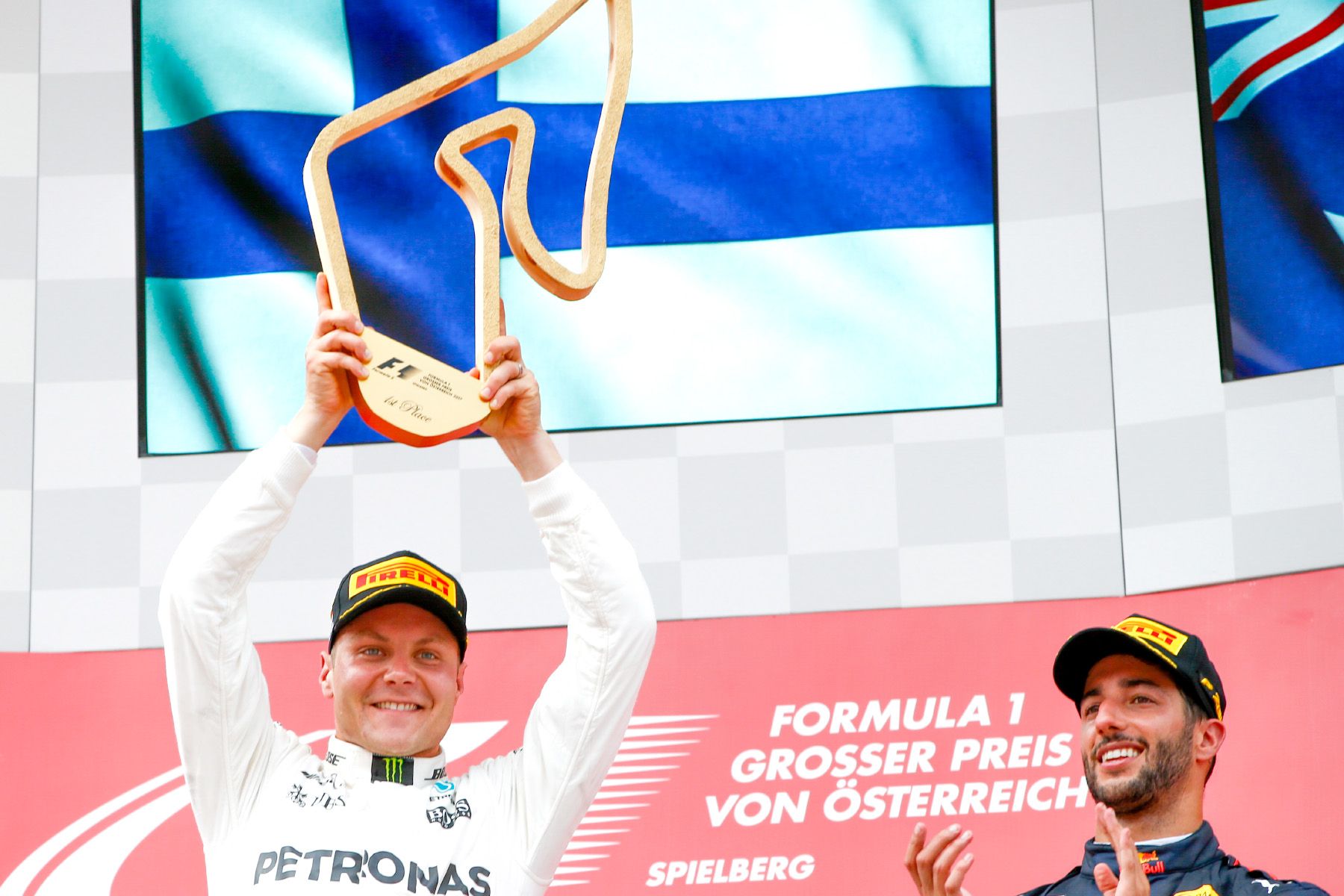 Valtteri Bottas led from lights to flag at the Red Bull Ring to claim his second career victory in Formula One.

The Mercedes driver made a sizzling getaway from pole, pulling away from his grid spot so quickly that the stewards briefly investigated him for jumping the start.

By the time the investigation found Bottas was innocent with a rapid 0.2-second reaction time, the Finn was already building a healthy buffer over Ferrari’s Sebastian Vettel, who started from second on the grid.

Vettel was unable to trouble Bottas until the last handful of laps, when the Ferrari closed to within a second of the lead, but even with the aid of DRS the German was unable to outmanoeuvre the Mercedes, which took the chequered flag with a 0.658-second margin.

“In the beginning I could control the pace, but in the end the backmarkers made it quite tricky,” Bottas said on the podium. “I had a bit of déjà vu in the end from Russia with [Vettel] catching up.”

“It’s still a long year ahead,” he said. “We’re not even halfway, so this makes good points … [but] definitely I believe and the team believes.”

Vettel said he regretted being unable to seal the victory, but the German was happy to be on the podium on a day his closest title rival, Lewis Hamilton, finished fourth, allowing him to extend his title lead to 20 points.

“It was very close,” he enthused. “The first part of the race I was struggling a bit to feel the car, but as soon as we put on the supersoft tyre the car came alive.

“I was catching little by little — I think I needed one more lap because he was really struggling to get up the hill.”

Daniel Ricciardo was a popular third-place getter on the Australian’s fifth consecutive visit to the podium after victory at the last round in Azerbaijan.

Key to claiming his trophy was the first sector on the opening lap, when the Red Bull Racing driver had to defend against Romain Grosjean’s Haas while he made an ambitious move to seize third place from the lumbering Kimi Räikkönen.

Lewis Hamilton, recovering from eighth on the grid, applied heavy pressure in the final few laps, including a near-complete pass at turn three on the penultimate lap, but the Australian held his nerve on the final tour to hold position at the flag.

“It was a fun race,” Ricciardo said. “Five in a row was awesome, but to get it here [at the team’s home race] — Max [Verstappen, Red Bull Racing teammate] got the home podium last year, I was a bit envious, but I got up here this year.”

Hamilton finished fourth, the Briton recovering from eighth on the grid, a place earnt by virtue of taking a five-place grid penalty for a gearbox change after qualifying third on Saturday.

The Mercedes driver earnt one place off the line when Max Verstappen was taken out of the race by a Daniil Kvyat-triggered crash with Fernando Alonso, and he then passed Sergio Perez and Romain Grosjean for fifth place.

Kimi Räikkönen then moved himself out of fourth place with a poor tyre strategy that left him on used ultrasoft tyres for too long in the first stint, gifting Hamilton a podium-contending place.

Räikkönen finished a distant fifth for Ferrari, and of concern will be that the Finn sits fifth in the drivers championship standings 24 points behind Ricciardo. He remains the only driver in the top two teams without a victory.

Romain Grosjean capitalised on an unexpectedly competitive weekend for Haas by holding his sixth-place grid spot for eight championship points as the last driver on the lead lap.

Formula One moved to Silverstone next weekend for the British Grand Prix on 14 – 16 July.

← Red Bull Racing close but not close enough
Can F1 separate the car from the driver? →