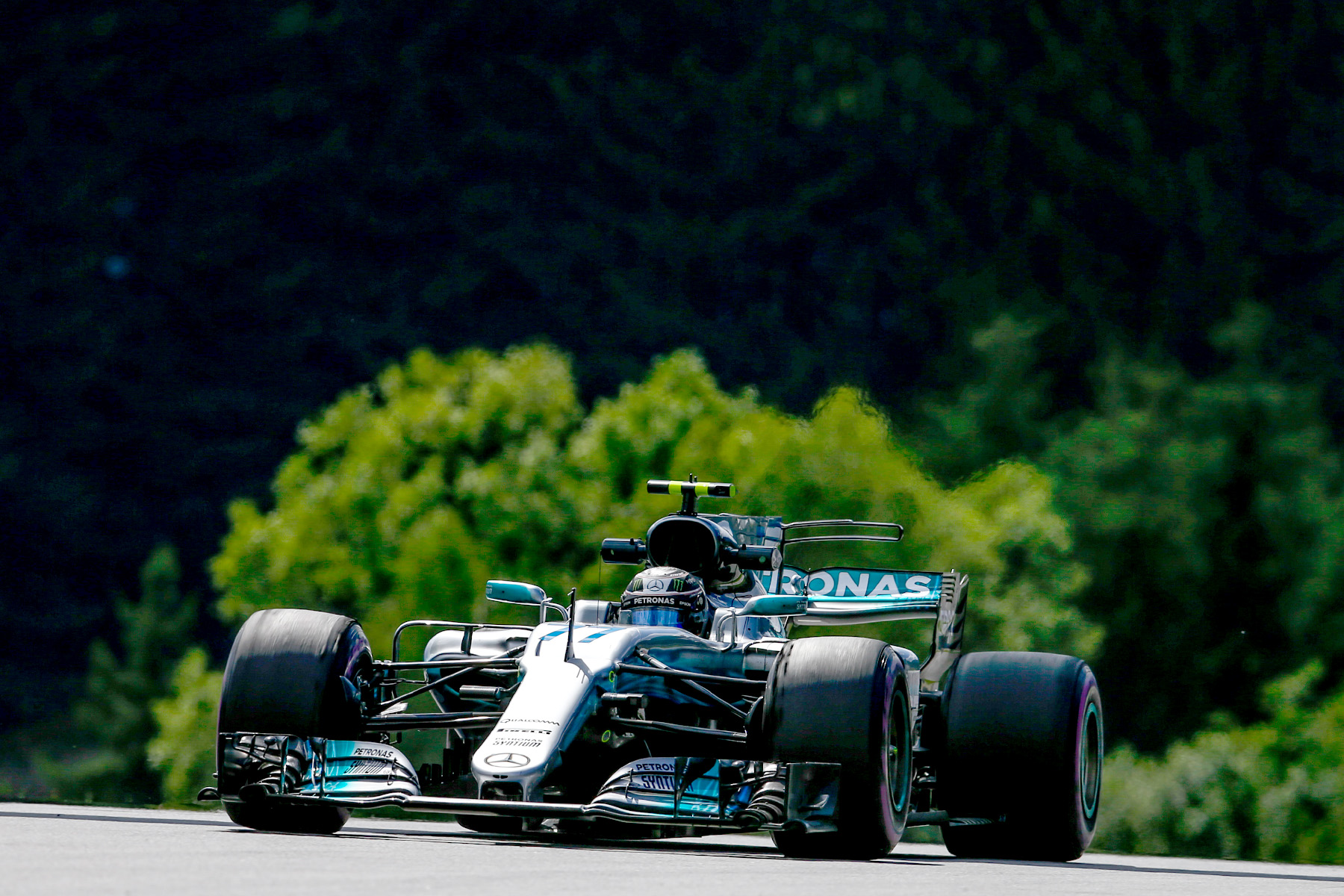 Valtteri Bottas has taken the second pole position of his career at the Austrian Grand Prix for Mercedes, shading Ferrari’s Sebastian Vettel by less than a tenth of a second.

Bottas started qualifying knowing he was likely to be Mercedes’s lead qualifier because teammate Lewis Hamilton was carrying a five-place grid penalty for an unscheduled gearbox change.

The hamstrung Briton needed to set the fastest time to start from a best-case scenario sixth and amongst the front-runners, but a scruffy series of laps put him out of contention and left Vettel and Bottas to a private duel.

The gap between the Finn and the German was 0.042 seconds after their first attempts, but neither was able to improve on their second laps when Romain Grosjean’s Haas stopped on track, triggering yellow flags and neutralising the session.

“The car was getting better and better as the grip was coming up. The lap was not quite perfect, but good enough.

“It should be an interesting fight tomorrow. The target is not less than winning for us. I can’t wait for tomorrow.”

Sebastian Vettel was happy to qualify second — critically ahead of his championship rival Hamilton and perhaps too because Ferrari appeared to be lagging behind Mercedes in recent races, particularly in qualifying.

“Not quick enough, but I was very happy,” Vettel summed. “The car was really good in the last qualifying [session].

“I was hoping for a last run, but a bit of an anticlimax with the yellow flag.

“The car’s been really phenomenal, so I’m really looking forward to tomorrow — should be a good race.”

Hamilton was subdued in defeat, knowing he will start from eighth on the grid and amongst the midfield cars.

“I just didn’t hook it up when it came to Q3,” he said. “Congratulations to Valtteri, he did a fantastic job.”

Kimi Räikkönen qualified a distant fourth, more than half a second off pole and 0.4 seconds behind Hamilton, but will gain a place from Hamilton’s penalty.

Red Bull Racing’s Daniel Ricciardo and Max Verstappen set the fifth and sixth fastest times at the team’s home race, but neither was as close to the front as they’d hoped ahead of the weekend.

Romain Grosjean was the quickest of the midfield cars, 1.2 seconds behind pole in seventh place and 0.1 seconds ahead of Force India duo Sergio Perez — who will be moved up to seventh on the grid when Hamilton drops to P8 — and Esteban Ocon and Toro Rosso’s Carlos Sainz in P10.

QUALIFYING TWO
The second segment of qualifying was uneventful, with Kevin Magnussen’s Haas automatically eliminated after the Dane terminally damaged his suspension during Q1, leaving him unable to set a lap from P15.

Daniil Kvyat struggled to match Toro Rosso teammate Carlos Sainz, the 0.3-second gulf between them being the difference between the latter’s progression in Q3 and Kvyat’s elimination in P14.

Neither McLaren was a top-10 candidate despite Stoffel Vandoorne running Honda’s third iteration power unit with extra horsepower. He was outqualified by teammate Fernando Alonso, the pair in twelfth and thirteenth.

Nico Hülkenberg attempted valiantly to make it through to the top 10, but the Renault driver fell 0.047 seconds short of tenth-placed Esteban Ocon’s time, leaving him in P11.

QUALIFYING ONE
The short Red Bull Ring compressed the midfield into less than one second, but from the moment free practice started in Austria Williams marked itself as an elimination contender.

Despite bringing a heavily revised aero kit to this round, neither Felipe Massa nor Lance Stroll was competitive despite the team’s historical preference for this track, including a front-row lockout in 2014.

The white cars exited in P17 and P18, ahead only of Sauber drivers Marcus Ericsson and Pascal Wehrlein, both of whom are powered by year-old Ferrari engines.

Jolyon Palmer qualified P16 as the fastest of the cars eliminated, the Renault driver two-tenths of a second quicker than Williams but still off the pace of his teammate.