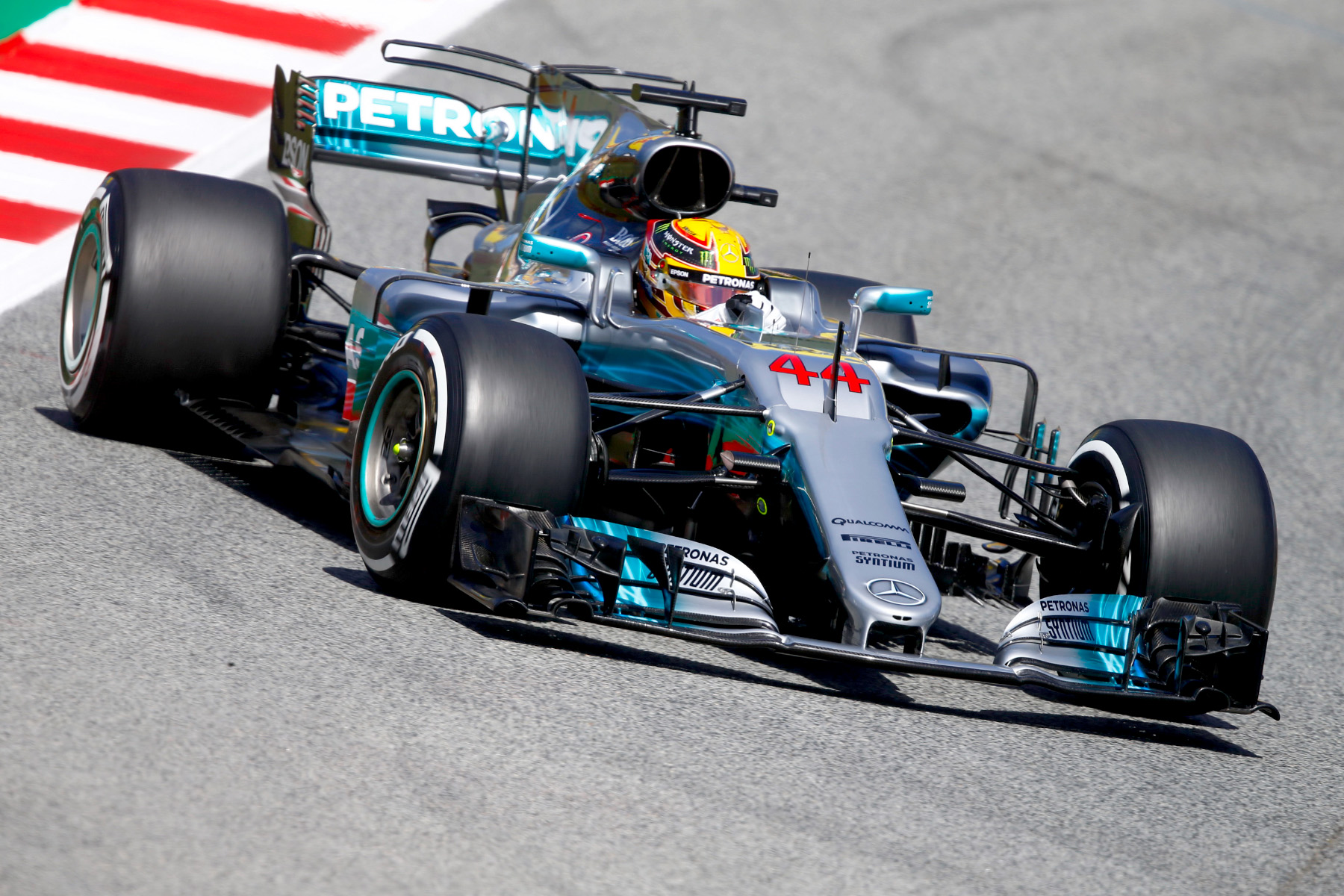 Hamilton started the race from pole position, but an ace start by Vettel in his Ferrari had the German steaming past the Briton at the first turn and threatening to derail Mercedes’s weekend.

The race sat on a knife-edge between a two and three stops, and both pit walls dared each other to blink first and commit to one path or the other.

Difficult for Ferrari was that its second driver, Kimi Räikkönen, was eliminated from the race on the first lap, depriving strategists of a vital strategic element.

Räikkönen tangled with Valtteri Bottas in a collision that sent the Ferrari wide and barrelling into Red Bull Racing’s Max Verstappen. Both Verstappen and Räikkönen retired with suspension damage.

Bottas, however, raced on, and become an important asset in Mercedes’s tactics to win back the lead.

Pirelli said a three-stop race was the fastest way forward, but it relied on being able to pass cars on a track that makes overtaking notoriously difficult.

Ferrari committed nonetheless, whereas Mercedes put both its drivers on a two-stop — in Bottas’s case a one-stop with an elongated one stop to slow Vettel’s progress down.

Though the move proved critical, strategies changed when a crash between Stoffel Vandoorne and Felipe Massa forced the Belgian into retirement in the turn one gravel and triggered the virtual safety car.

Mercedes seized the chance to stop Hamilton, and the tyre change cost minimal time while the other cars circulated at reduced pace.

The move forced Ferrari to reconsider its three-stop plan, but it made the decision too late — Vettel was stopped to change to the medium tyre one lap after the virtual safety car ended, which meant he exited the pits alongside Hamilton rather than with the seven-second lead he had built up in the middle stint.

Vettel kept Hamilton at bay for six laps, in part thanks to lapped traffic making it difficult for the Mercedes to maximise its use of the DRS, but on lap 44 Hamilton proved irresistible on the softer tyre and breezed past the Ferrari and on to victory.

“The team did an incredible job today,” Hamilton said. “That’s how racing should be. That’s as close as it could be. Sebastian was incredibly close, incredibly fast.

“The team did an incredible job with the strategy. That’s how racing should be, and I loved it. I wouldn’t change it for the world.”

Vettel was surprised his middle-stint lead had evaporated during the second stops, but he was satisfied he had done the maximum possible.

“I was pushing,” he said of his last stint. “I was a bit surprised when we came out we were already so close.

“I managed to stay ahead. It was really close. The laps after [the last stop] I did everything I could to stay ahead [but] he just flew past on the straight. It was a shame, but it was a good race.”

Daniel Ricciardo completed the podium thanks to Bottas’s engine failure on lap 39.

Bottas was running an older power unit after his Spanish-spec engine sprung a water leak on Saturday morning, forcing the team to change him back to the unit that had powered the car for all four opening rounds to the season.

It was Ricciardo’s first podium of the year, but the gap to the next car ahead — 72.3 seconds — was demoralising, leaving the Australian to a lonely race on his own given Verstappen was eliminated on the first lap.

“It feels good,” he said of his first podium in 2017. “We had a little bit of fortune today with Valtteri stopping.

“For now we take what we can. It’s nice to be up on the podium; really happy to spray some champagne again.”

Hamilton and Vettel’s maximum points haul has dramatically change the championship complexion for non-finishing teammates Bottas and Räikkönen, despite the former’s win in Russia two weeks ago.

Bottas sits 35 points behind Hamilton and 41 points off the championship lead, while Räikkönen is a further 14 points back.

Though 14 rounds remain in this 19-race season, both Finns find themselves in difficult positions within their teams when it comes to challenging for race wins against their respective teammates.

Further down the finishing order in Spain Sergio Perez and Esteban Ocon brought home a phenomenal 22-point haul for Force India, capitalising on retirements to jump ahead of the midfield in the championship standings.

The German pulled off an ambitious one-stop race, starting on the softs and pitting for the medium tyres after 33 laps.

The strategy moved him up eight places from P15 on the grid, but a pit lane infringement dropped him to a nonetheless rewarding seventh, earning four points for the team.

Fernando Alonso finished 22 seconds outside the points after qualifying seventh, but the Spaniard’s unlikely quest for points ended on the first lap when Felipe Massa, taking avoiding action when Räikkönen and Verstappen careered back onto the circuit after their tangle, force the McLaren off the track and down the order.