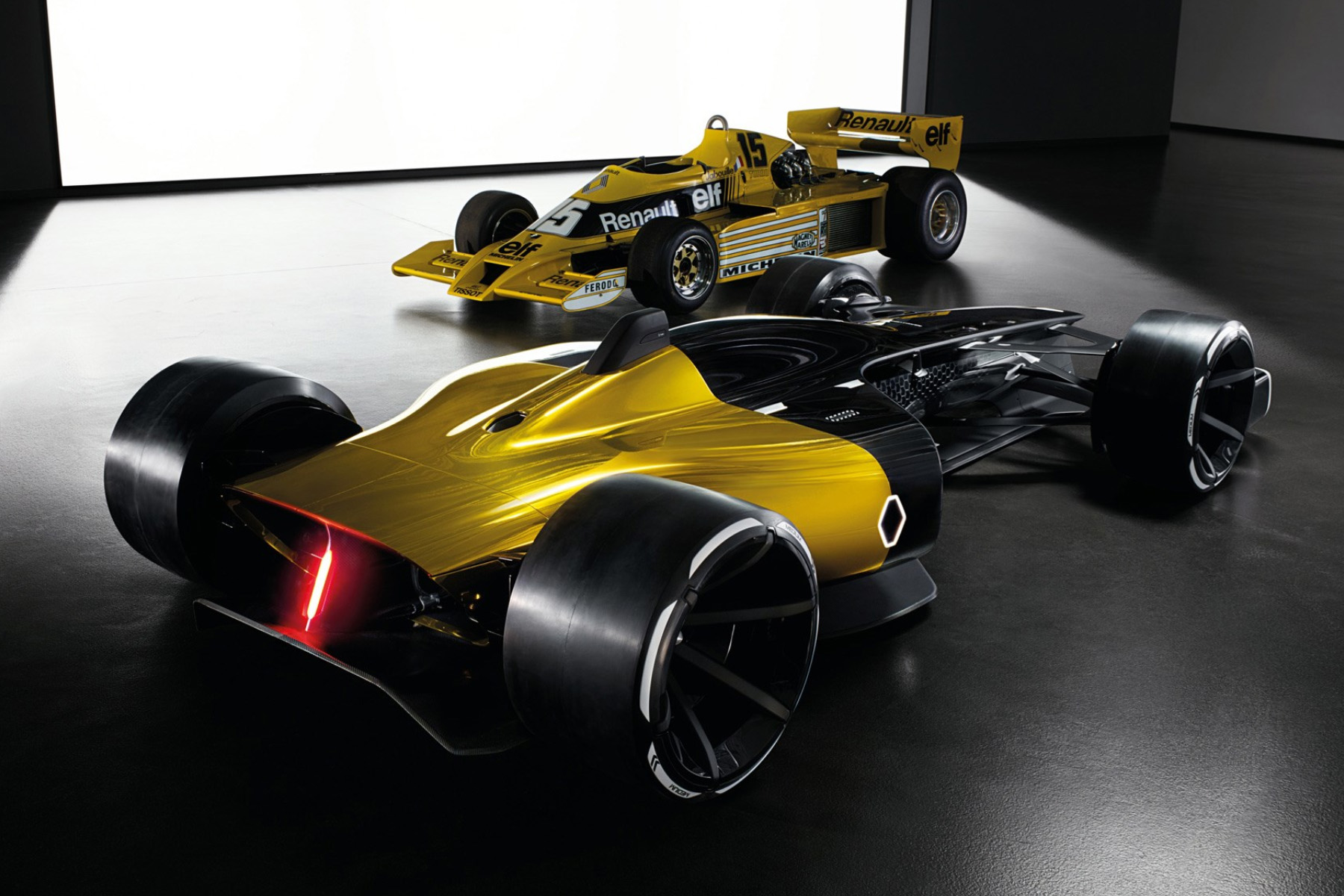 Of all Formula One’s manufacturers, Renault is the most accurate bellwether of the sport’s relevance (or otherwise).

Ferrari uses Formula One as its sole marketing venture, while Honda’s involvement is primarily a technical exercise, much to McLaren’s frustration. Mercedes competes to win championships, but as the board’s second-guessing in 2011–12 suggests, when the wins dry up, so too may the money supporting the team.

Renault, however, is a little different. The French company’s F1 involvement has waxed and waned, like any other manufacturer’s has, in the 40 years since its 1977 debut, but its continued involvement this decade has hinged on the sport choosing technological relevance over generic muscle car chest beating.

For this reason particular attention should be paid to the RS2027, Renault Sport’s minimalist but powerful 10-year vision for Formula One.

It addresses safety with a 3D-printed transparent cockpit canopy — a nod to the current debate on head protection dividing the sport amongst a series of halfway-house solutions — and an impact and flame-resistant polycarbonate survival shell to protect the driver.

It also gives thumbs-up to discourse dictating that F1 must be the most powerful circuit racing category on the planet by proposing a one-megawatt — or 1341-horsepower — power unit comprising an 800-kilowatt V6 internal combustion engine paired with two 250-kilowatt electric motors. Mated with an 800-kilogram chassis, the power-to-weight ratio is increased from today’s 980kW per tonne to a mighty 1250kW per tonne.

Finally, the Renault concept contributes to the fan-driven rethink of the F1 spectacle by dramatically increasing visibility of the driver with the transparent canopy and by using LED lights in the wheel rims to convey information to fans, including the car’s remaining energy store, race position, laps remaining, and virtually any other simple data. That’s before considering the overall design of the car is both aesthetically pleasing and consistent with Formula One’s long-term single-seater design philosophy.

“One of our aims at Renault Sport Racing is to point the way to the future of Formula One, helping this discipline pull in audiences in an environment consistent with Groupe Renault objectives,” said Renault’s racing CEO Cyril Abiteboul.

It seems like the RS2027 is all things to all people, then — but what it certainly isn’t is compromise.

Renault has put forward a concept only a car marque with deep pockets could build with manufacturing technology available only to those with large-scale uses for it. Such a car, perhaps achievable by the likes of Renault, Ferrari, Mercedes et al by the end of the decade, would require resources beyond the sport’s smaller but crucial independent teams.

Moreover, Renault’s cutting-edge one-megawatt power unit is being proposed just after the FIA sat down with current and potential future powertrain builders to agree that a post-2020 power unit should be simpler, louder, and cheaper than the current V6 turbo hybrids.

Is it possible to reconcile Renault’s vision for the future with a more financially sustainable sport that allows all teams to compete on a relatively level playing field?

Cost saving by standardising non-performance bits are part of the Renault package, but today’s F1 regulations already enable teams to buy a great deal of parts from external suppliers, with only the monocoque, survival cell, crash and roll structures, and aerodynamics required to be original intellectual property. Haas is one example of a team maximising this approach.

To offset the increased cost, then, either fewer parts would have to be listed or the regulations would have to allow full-blown customer cars. Either option, however, presents the sport with an existential problem: are customer cars consistent with the ethos of the sport?

While manufacturers all have their reasons for entering the sport, the independent teams exist solely to compete in Formula One. They are, without exaggeration, F1’s lifeblood, so to effectively regulate their place out of the sport by enabling any wannabe to turn up and buy the most competitive car off the shelf each season should be impermissible.

So where does that leave the RS2027, the most realistic F1 concept car to date? It is an undoubtedly fascinating engineering concept, a bold vision for the future of the sport, and a car that certainly plays to motorsport fans hardcore and casual.

But is it achievable in a more sustainable and egalitarian Formula One? It’s an interesting proposal from one of many stakeholders for Ross Brawn and the FIA to consider as they attempt to set the sport’s path into the next decade.

← Is it time for team orders at Mercedes?
Why F1 must not save Honda →