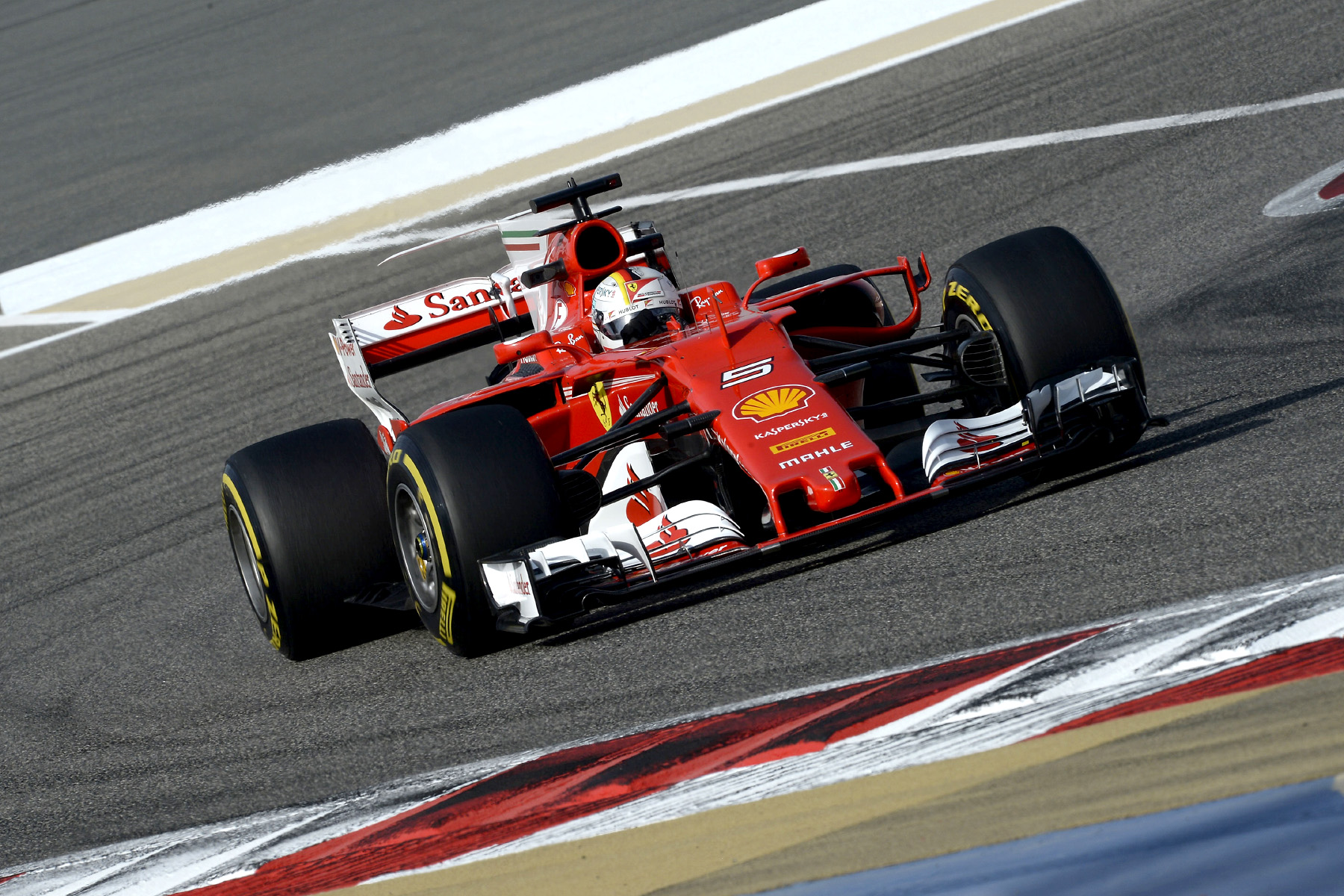 Sebastian Vettel has recorded an emphatic victory over Lewis Hamilton and Valtteri Bottas to take back the championship lead at the Bahrain Grand Prix.

The German started from third on the grid, but he jumped second-placed Hamilton on the first lap to apply pressure to race leader Bottas, as he did to the leading Mercedes in Australia.

When Bottas’s pace began to slow, however, rather than risk a three-way fight with the Mercedes, Ferrari opted to pit Vettel on lap 11 for a new set of supersofts, taking the strategic initiative.

Ferrari teammate Kimi Räikkönen did likewise on lap 13, by which point is became obvious Mercedes was being outfoxed — Vettel sett a fastest lap three seconds quicker than Bottas’s previous tour.

Mercedes was saved, however, when on lap 13 Carlos Sainz and Lance Stroll collided near the exit of the pit lane, ending each other’s races and triggering a safety car.

Mercedes stacked its cars — Bottas took supersofts, Hamilton switched to softs — with Hamilton deliberately slowing at the pit lane entry to hinder the following Daniel Ricciardo, for which the Briton would later receive a five-second penalty.

It was in vain, however, with Ricciardo splitting the second-placed Bottas from the fourth-placed Hamilton behind the safety car — though Mercedes, fortunately, had lost limited ground to Vettel.

Hamilton made quick work of Ricciardo after the safety car came in on lap 16, but he took another 10 laps to get past his teammate, who was slowed by the more delicate tyre, in a team-assisted move.

Bottas dived into the pits to switch over to the softs on lap 29 and Vettel did likewise five laps later, leaving Hamilton at the front of the field to attempt to build a gap to offset his final stop plus his time penalty.

On lap 41 Hamilton made his final stop. He emerged from the pits in third, 10 seconds behind Bottas and 20 seconds behind Vettel, and made rapid inroads on his teammate.

After just six laps Hamilton was past Bottas, who again moved aside for this teammate, and the Briton began closing on Vettel, but with the Ferrari having had the advantage of time to save fuel and tyres, the Mercedes was already going to run out of tyres and laps.

“A really great day,” said a beaming Vettel on the podium. “I just love what I do!

“It was just a pleasure I could control the pace at the end. The car was a dream today. Happy Easter and thank you very much!”

Vettel admitted he was downcast after qualifying almost half a second off the pace, but he almost immediately smelt opportunity in the race.

“Right after the start we knew we were quick,” he said. “I really tried to put Valtteri under pressure, but he didn’t make any mistakes, so it was difficult on the straights to get him.”

The German admitted his mind flashed back to his lost strategic advantage in China last week, when an early safety car thwarted a similar early gamble.

“I was surprised when I came out ahead of all of them, because I thought after the safety car we would’ve lost the advantage.”

On the podium Hamilton thanked his teammate for helping his victory challenge, but he took responsibility for potentially costing the team points through his time penalty.

“Firstly, congratulations to Sebastian, he did a fantastic job today,” he said. “And thank you to Valtteri for being a gentleman out there.

“The pit lane [penalty] was really my fault, so apologies to my team.

“We’re going to regather and come back as a team and keep fighting.”

Bottas was very obviously disappointed to manage only third place on the podium after starting from pole and leading the first stint of the race, but the Finn recognised he was nonetheless gradually breaking down his teammate’s advantage.

“It was a really tricky race for me,” he said. “I struggled with the pace all through the race.

“I think in the first stint we found a bit of an issue with the tyre pressures, but every stint after that we were really limited.

“I was oversteering all through the race, and that’s why the pace was slow.

“For sure the target today was a lot higher. I think overall this was the best weekend for me so far, and I think there’s a lot more to come from me with this team.”

Kimi Räikkönen finished a distant fourth, 22 seconds behind his race-winning teammate, with Red Bull Racing’s Daniel Ricciardo a further 17 seconds back in fifth.

Felipe Massa finished sixth for Williams, two places up from his qualifying position, but Sergio Perez’s seventh-place finish, up 11 places from his grid spot, earnt Force India impressive points after a grim Saturday.

Romain Grosjean scored four points for Haas from eighth, ahead of Nico Hülkenberg in ninth for Renault and Esteban Ocon’s Force India in tenth.

← Bottas best in Bahrain qualifying
Is it time for team orders at Mercedes? →