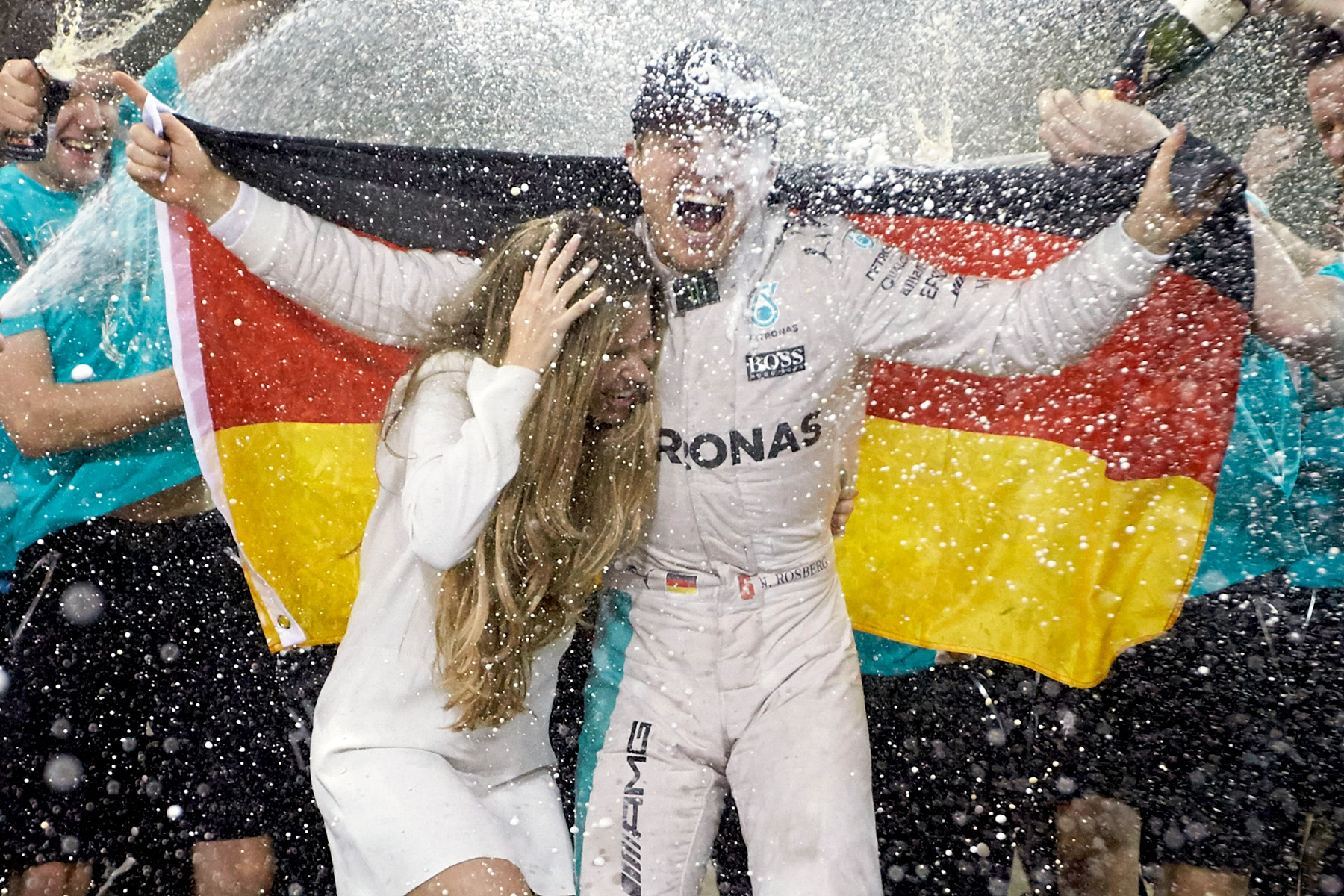 Nico Rosberg has announced his retirement from Formula One less than one week after sealing his first world championship for Mercedes.

The 31-year-old German announced his decision ahead of Friday’s FIA prize-giving gala, where he accepted the championship trophy from world motorsport president Jean Todt.

“Since 25 years in racing it has been my dream, my ‘one thing’, to become Formula One world champion,” Rosberg said in a statement. “And now I’ve made it. I have climbed my mountain, I am on the peak, so this feels right.

“My strongest emotion right now is deep gratitude to everybody who supported me to make that dream happen.”

The 23-race -time race winner paid tribute to his wife, Vivian, and highlighted that his young family, with one-year-old daughter Alaïa, was key to his shock decision.

“This season, I tell you, it was so damn tough. I pushed like crazy in every area after the disappointments of the last two years; they fuelled my motivation to levels I had never experienced before, and of course that had an impact on the ones I love, too.

“It was a whole family effort of sacrifice, putting everything behind our target. I cannot find enough words to thank my wife Vivian; she has been incredible.

“She understood that this year was the big one, our opportunity to do it, and created the space for me to get full recovery between every race, looking after our daughter each night, taking over when things got tough and putting our championship first.”

Rosberg, who signed a two-year extension to his contract at July’s Hungarian Grand Prix, said he started thinking of retiring from the top tier of motorsport at the Japanese Grand Prix, where his victory put the title out of teammate Lewis Hamilton’s grasp, allowing him to cruise home in second at the remaining four races and claim the crown.

“From the moment when the destiny of the title was in my own hands the big pressure started and I began to think about ending my racing career if I became world champion.

“On Sunday morning in Abu Dhabi I knew that it could be my last race, and that feeling cleared my head before the start.

“I wanted to enjoy every part of the experience, knowing it might be the last time — and then the lights went out and I had the most intense 55 laps of my life.

“I took my decision on Monday evening. After reflecting for a day the first people I told were Vivian and Georg (Nolte, from Nico’s management team), followed by Toto.”

Toto Wolff, executive director of the Mercedes Formula One team, said he immediately understood his driver’s choice to retire.

“This is a brave decision by Nico and testament to the strength of his character,” he said. “He has chosen to leave at the pinnacle of his career, as world champion, having achieved his childhood dream.

“The clarity of his judgement meant I accepted his decision straight away when he told me.”

The team leader paid tribute to Rosberg’s tenacious character in the season he bounced back from two stinging world championship defeats.

“It’s impossible to capture the essence of a person in a few short words, but Nico has a special combination of natural talent and fighting spirit that have brought him to where he is today.

“Throughout his career people have thought he was on a golden path to success just because his father [1982 world champion Keke Rosberg] was a world champion; in fact I think in some ways that made the challenge greater and meant he had to fight even harder with the weight of expectation on his shoulders.”

Wolff also thanked Rosberg for his contribution to building the Mercedes team when he joined in its first year after buying the championship-winning Brawn squad in 2010, and he noted that finding a replacement in such a case will take time.

“This is an unexpected situation but also an exciting one,” he said. “We are going into a new era of technical regulations and there is a free Mercedes cockpit for the seasons ahead. We will take the necessary time to evaluate our options and then find the right path for our future.”

Teammate Lewis Hamilton, who will be deprived of the opportunity to win back the title from his long-time rival, said he wasn’t surprised by Rosberg’s decision.

“I’m probably one of the only people that it was not a surprise to,” he said at the FIA gala. “But that’s because I’ve known him for a long time.

“This is the first time he’s won [in their rivalry since competing in karts] in 18 years, hence why it is not a surprise that he decided to stop.

“He’s also got a family to focus on, having children, and Formula One takes so much of your time.

“It’s going to be very strange, and it will be sad not to have him in the team next year.

“The sport will miss him, and I wish him all the best.”

Four years of toil at the British team bore little fruit for the German, but he consistently out-performed his teammates in his latter three seasons, including Le Mans winner Alexander Wurz.

In 2010 Rosberg’s career came alive when Mercedes, entering the sport for the first time as a constructor since 1955, signed him alongside seven-time world champion Michael Schumacher to rebuild the 2009 championship-winning Brawn team.

Rosberg easily dispatched the sporting icon in Schumacher’s less successful second career, beating him in the championship standings in all three seasons, before Lewis Hamilton was signed to replace the elder German for the 2013 season.

Their first season as F1 partners after junior careers racing together left them separated by just 18 points but adrift of the championship fight — but in 2014, under new technical regulations, the Mercedes package proved almost unbeatably dominant, pitting the teammates directly against each other.

Their once friendly and nearly lifelong relationship deteriorated under the strain of the championship fight, which Hamilton won at the season-ending Abu Dhabi Grand Prix when Rosberg’s car suffered a devastating electrical problem.

Matters improved little in 2015, when Hamilton was able to dominate Rosberg to win a second successive title three rounds from the finish, but those final three grands prix proved the building blocks of Rosberg’s sole championship.

The German won the opening four races of the 2016 season — making a run of seven successive wins from the year prior — to set up a five-point championship win by year’s end.

While his retirement has deprived the sport of the mouth-watering prospect of a renewed Mercedes intra-team rivalry, the identity of his replacement is an equally fascinating question.

Mercedes junior Pascal Wehrlein, without a contract in 2017, is in the box seat, but the three-time championship-winning team may decide to plump for a more experienced driver to partner Hamilton to guard against a more competitive field of cars under new regulations due for introduction next year.