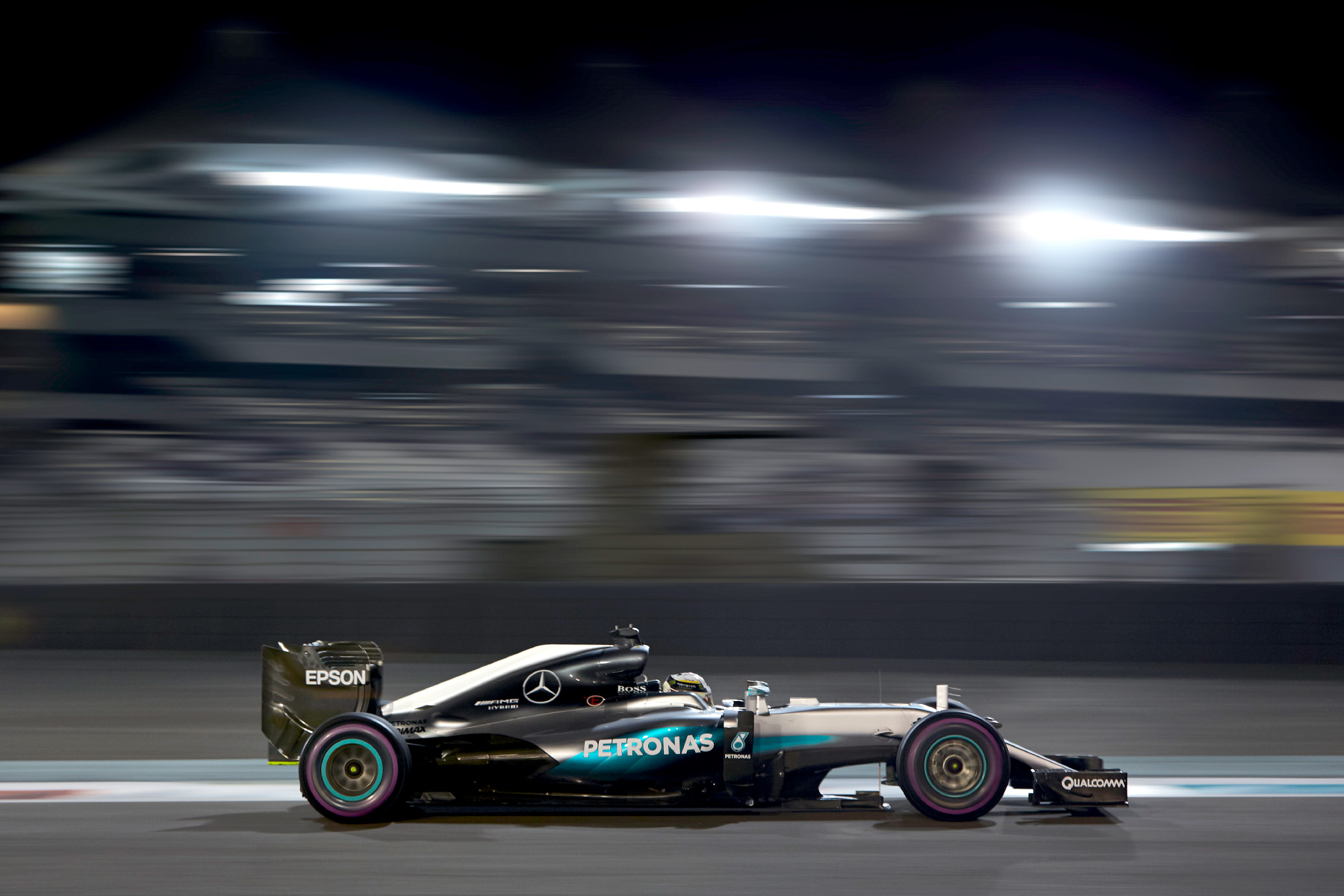 Lewis Hamilton will start the 2016 championship-deciding Abu Dhabi Grand Prix from pole after leading his teammate and title leader Nico Rosberg throughout qualifying.

The Briton, who trails Rosberg by 12 points, has finished ahead of his teammate in every session so far this weekend, culminating in a 0.303-second gap to decide the front row of the grid.

“It’s been a great weekend so far,” Hamilton said. “So far this weekend it’s just been solely focussed on getting this position, which I truly believed I could, and it worked.”

It was Hamilton’s 61st career pole position, and the Briton reflected on the car that won him 12 this season.

“It’s been strange coming here this weekend realising this is going to be the last qualifying session with this car, which is so incredible. It’s been such a privilege driving this car.

“This weekend so far I’ve got the car in a real sweet spot — perfect position for tomorrow.”

The championship equation remains out of Hamilton’s hands, however — even victory will not suffice unless Rosberg fails to finish on the podium in Sunday’s race.

Rosberg’s second-place qualification, therefore, is all the German needed to keep himself in the box seat for a maiden title — though he was disappointed to start the race on the back foot.

“As I’ve said, I came here to try to be on pole, so not ecstatic by today,” he said. “Lewis did a better job and was just a couple of tenths quicker — but, as we know, there are still opportunities tomorrow, and for sure I’ll try to go for the win.”

Daniel Ricciardo qualified a handy third place for Red Bull Racing with a counter-strategy for the race start after setting his fastest Q2 time on the supersoft, rather than ultrasoft, tyre.

“We’ve got to try something I think,” explained the Australian. “It seems to be a bit of a trend this year, I think.

“We’ll see what it does tomorrow. Hopefully it puts us in the fight.

“Third was the target, hopefully we can be somewhere up here tomorrow as well.”

Ricciardo shares the second row of the grid with Ferrari’s Kimi Räikkönen.

Räikkönen and teammate Sebastian Vettel started the Abu Dhabi weekend having outqualified each other ten times apiece, meaning the Finn beat the four-time world champion on qualifying pace in 2016.

Max Verstappen will line up in sixth to complete the third row, the Dutchman on the same counter-strategy as his Australian teammate.

Force India locked out the fourth row, Nico Hülkenberg leading Sergio Perez in the former’s last race for the team before switching to Renault next season.

Fernando Alonso hauled his McLaren to ninth on the grid, outqualifying Felipe Massa in his final grand prix.

QUALIFYING TWO
Race strategy began taking shape in Q2, but only amongst the Red Bull Racing drivers, both of whom set their fastest laps on middle-of-the-range supersoft tyre.

Max Verstappen and Daniel Ricciardo’s times, however, were only just good enough, and the team sent them out of the ultrasoft tyre as a precaution against lower-placed teams usurping their Q3 berths.

The fight fizzled out, however, when none of the bottom six cars improved sufficient to upset the frontrunners, and both Red Bull Racing cars abandoned their final laps.

The only live fight for position was between the Williams and McLaren cars.

Felipe Massa progressed to Q3 on his final F1 weekend ahead of Fernando Alonso for Williams and McLaren, ahead of respective teammates Valtteri Bottas and Jenson Button, both of whom were eliminated.

Esteban Gutierrez outqualified teammate Romain Grosjean in the Mexican’s final qualifying session for Haas, and Jolyon Palmer led Pascal Wehrlein at the bottom of the session in places fifteen and sixteen.

QUALIFYING ONE
As the sun set on the final qualifying session of 2016, the sport’s top-10 teams felt their way through the changing conditions to optimise their strategies for Q3.

Williams attempted to save both its drivers a set of the fastest ultrasoft tyres, but only Valtteri Bottas could extract enough pace from the red-marked soft compound rubber — the middle compound of the weekend’s range — to make it work.

Felipe Massa, however, found himself on the cusp of Q1 elimination at his final grand prix weekend, forcing him to burn a set of the stickiest rubber to ensure a Q2 berth.

Toro Rosso, reaching the end of a laborious season with outclassed Ferrari power units, appropriately found itself battling at the very back of the grid alongside the Sauber, Manor, and Renault cars.

Jolyon Palmer and Pascal Wehrlein sneaked into Q2 for Renault and Manor by two-tenths of a second from Daniil Kvyat, who was eliminated in P17.

Kevin Magnussen in the second Renault was a further 0.2 seconds behind, but ahead of a tight battle between Felipe Nasr and Esteban Ocon for P19, which the Brazilian won.

Carlos Sainz was unusually off the pace in P21, while Marcus Ericsson was slowest of all to take the final place on the grid.