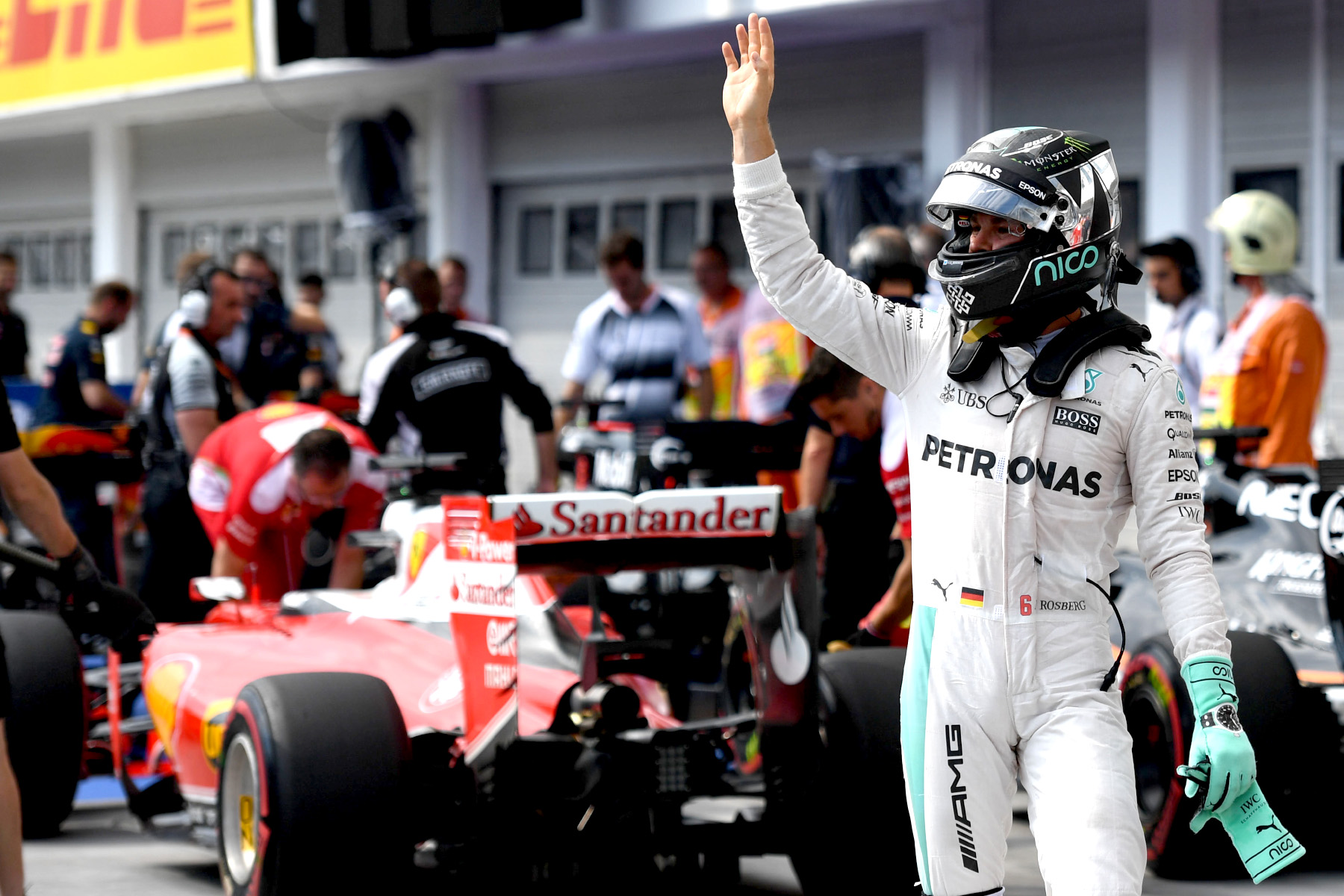 Nico Rosberg has snatched pole position from the grasp of teammate Lewis Hamilton in a dramatic yellow-flag twist to qualifying for the Hungarian Grand Prix.

Qualifying finished almost an hour later than scheduled after heavy rainfall delayed a red flag-packed Q1 by 20 minutes, but it was a yellow flag in the final moments of the afternoon that proved decisive.

Nine of the 10 Q3 drivers embarked on their second flying laps at once, creating a heightened risk of an incident with the potential to undermine the shootout for pole.

Fernando Alonso delivered on that risk when he spun his McLaren in the second sector. Hamilton, who was close behind the Spaniard, had his run neutralised by the resulting yellow flag, as did Red Bull Racing’s Daniel Ricciardo.

Rosberg, however, arrived at the affected area moments before it turned green, meaning he had to slow for just two yellow flags and was still able to set the fastest middle sector nonetheless.

The difference in conditions on Rosberg’s lap opened the door for an easy pole position, which he took with a 0.143-second advantage.

“It was a really challenging qualifying,” Rosberg said. “The conditions were changing all the time; it was really exciting out there.

“I just got a really good lap in on that last lap, so awesome, I’m very happy with that.

“I’ve been feeling really good out there the whole weekend, even with high fuel on Friday. I look forward to the race and a great opportunity tomorrow.”

The stewards took up the matter more than three hours after the conclusion of qualifying, but ultimately ruled that no action need be taken.

Lewis Hamilton, who had been out of sorts all weekend and had crashed in free practice two on Friday afternoon, felt he had the speed to compete for pole position.

“I felt good on the lap — a bit unfortunate with Fernando, but these things happen.

“I’m not too disappointed. It was s tricky session and I did the best I could do.”

Red Bull Racing and Ricciardo were a surprise package for qualifying after looking a distant half-second off the pace on Friday.

The early mixed conditions advantaged the team’s high-downforce car, but it looked equally happy on the rapidly evolving dry circuit at the end of Q3.

Ricciardo felt he was in the hunt for his second pole position of the season before yellow flags undermined his lap.

“I was pretty angry on that last lap because I was up a bit and I think it would’ve put me closer to pole,” he said.

“At the same time I think the session went really well. I think in all conditions we were really competitive. It was fun, it was challenging.”

Ricciardo’s place in the top 10 was challenged by a post-race application of the 107 per cent rule, which also threatened to demote four other drivers in the top 16.

After lengthy deliberations, however, the stewards decided that the exceptional weather conditions that led to a Q1 session that lasted almost 55 minutes was reason enough to allow the offending drivers to keep their qualification times.

Max Verstappen was unable to set his final flying lap after he set too slow a warm-up lap and missed the end of the session, but his first hot lap from earlier in the session was still fast enough to fend off Sebastian Vettel’s Ferrari for fourth place.

Ferrari has been disappointed to find itself off Red Bull Racing and Mercedes’s pace this weekend, and Vettel’s 0.3-second gap to Verstappen and 0.9-second deficit to pole will do nothing to liven the mood.

Carlos Sainz qualified an excellent sixth, but the Spaniard’s performance was overshadowed by the presence of both McLaren drivers qualifying in the top 10 for the first time since the team renewed its partnership with Honda last season.

Alonso qualified ahead of Jenson Button despite his spin, and the world championship-winning teammates put themselves ahead of Nico Hülkenberg’s Force India and Valtteri Bottas’s Williams.

After a marathon Q1 session, Q2 in damp conditions went off seamlessly, and as the circuit conditions improved, so too did the times.

With seven minutes to go, Bottas and Williams abandoned the intermediate tyre and gambled on slick supersofts. His out-lap was messy, with puddles punctuating the long dry lines forming around the track, but his first sector was quick enough to coax the rest of the field onto the same tyre.

The times began to tumble — first Bottas went quickest by just a tenth of a second, but before long lap times were being shaved by seconds.

The last man over the line would have the greatest advantage in the drying conditions, but the second Mercedes, driven by Lewis Hamilton, was out of sequence — Hamilton’s mechanics watched his name tumble down the order before mercifully stopping at P10 at the chequered flag.

Ferrari’s Kimi Räikkönen, however, was eliminated in fourteenth and behind Romain Grosjean’s Haas, Daniil Kvyat’s Toro Rosso, and Sergio Perez’s Force India — only Esteban Gutierrez and Felipe Nasr, for Haas and Sauber, were slower than the Finn.

Rain arrived 40 minutes before qualifying and persisted into the first 15, delaying the session for 20 minutes.

Every car took to the track when the session got underway, each driver intent on assessing the circuit for themselves and setting a base time.

Just as they did so, however, track forecasts accurately predicted more heavy rain for within five minutes, and the circuit was again lashed by water.

But the rain was short-lived, and in less than 10 minutes the safety car was back on track to analyse its condition. The session was resumed at 20 minutes to the hour.

Cars returned to the track in a flurry, none wanting to miss the circuit at its best in the first knockout segment of the afternoon, but after just four minutes the red flags were waved again, this time for Marcus Ericsson.

Ericsson lost control of his Sauber at turn 10 before smacking heavily into the wall, necessitating marshals to enter the circuit to rebuild the barrier.

The second resumption began with nine minutes remaining, and the drying track under a clearing sky presented a tantalising opportunity for some drivers to switch to the intermediate tyre.

Seven drivers were brave enough, but the borderline conditions caught out Felipe Massa, who lost control of his Williams on the kerbs at turn four. Another red flag was thrown with little more than five minutes remaining on the clock.

In the opinion of all 20 remaining drivers — though Kevin Magnussen was late in deciding — the almost 10-minute delay was enough time for the track to warrant intermediate tyres, turning the end of the session into a straight fight for a Q2 berth.

It took only four minutes for the fourth red flag to be thrown, this time for Rio Haryanto at turn 10. With less than two minutes left on the clock, race control decided to abandon Q1, confirming the order of the 18-minute segment almost 55 minutes after it started.

Only three of the eliminated six drivers hadn’t crashed out of the session. Jolyon Palmer qualified in P17 for Renault, ahead of Massa and the Englishman’s Renault teammate Kevin Magnussen.