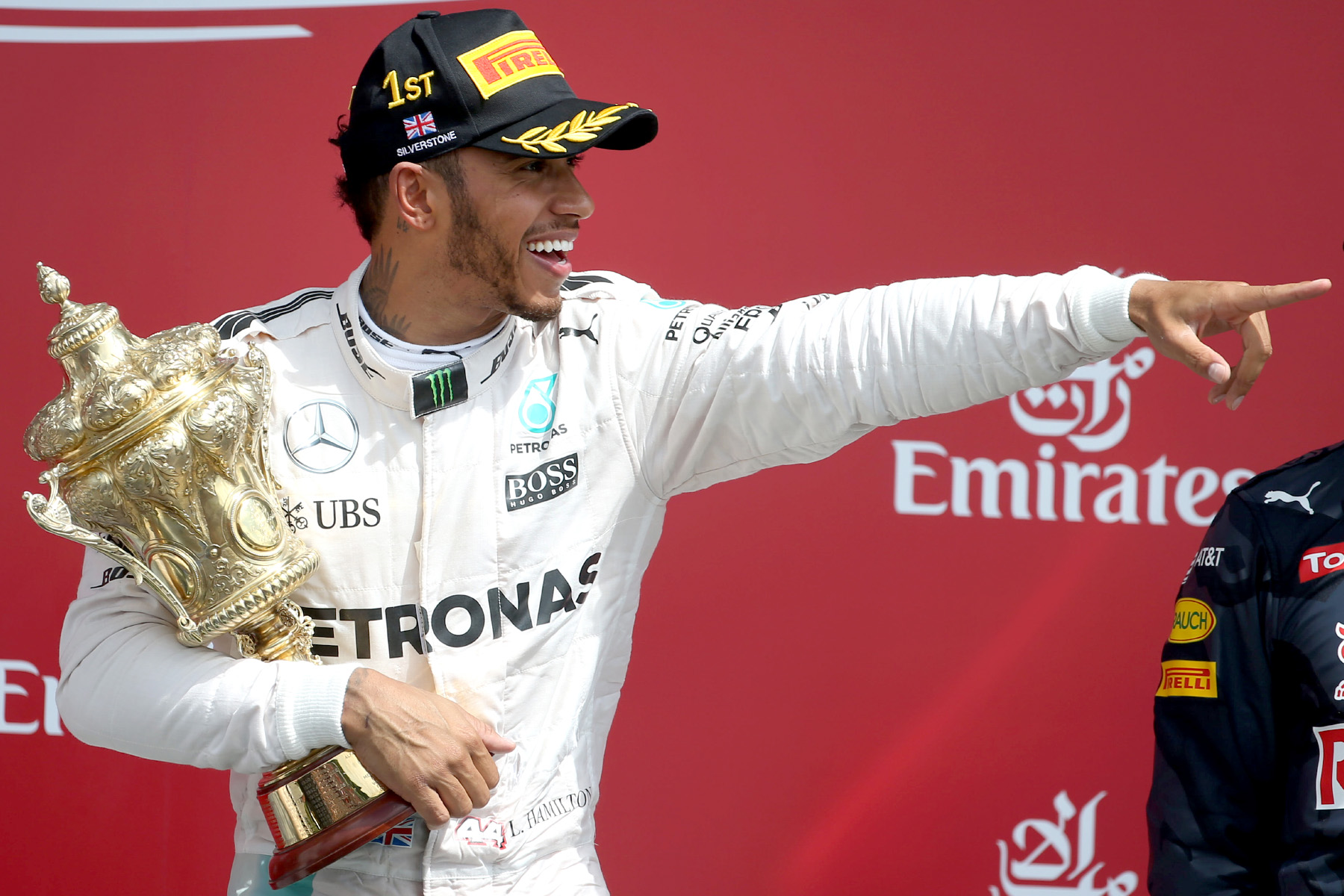 Lewis Hamilton has easily won the British Grand Prix in front of an estimated 135,000-strong home crowd at Silverstone.

The race started behind the safety car after a brief but heavy downpour, but the Briton had no trouble navigating the switch to intermediate tyres on lap seven and medium tyres on lap 18, losing his lead for only one lap as the pit stops shook themselves out.

Aided by a raging battle for second place Hamilton had little difficulty keeping a buffer of around six seconds throughout the race, which culminated in his fourth British Grand Prix victory — a record for British drivers at Silverstone.

“We’ve got the best fans here, thank you so much!” said the jubilant Hamilton on the podium. “Look at these guys! You don’t see this anywhere around the world.

“Firstly I’m glad the good English weather came out — today we went out on a formation lap and it was dry, and then it rained.

“It was so tricky in those conditions. I tried not to make any mistakes, and it was difficult for all of us. That’s what I love about this race: it’s never smooth sailing.”

The tussle for the podium played out between Nico Rosberg and Max Verstappen, with the latter sneaking past Rosberg on lap 15 with a perfectly judged and gutsy move out of Becketts and into Chapel, turns 13 and 14.

Using the superior grip off the damp racing line Verstappen made a move around the outside of Rosberg look easy and made himself the front-running candidate for driver of the day.

From there Verstappen began hunting down Hamilton in the lead, and when Hamilton and Rosberg stopped for slicks on lap 18 Red Bull Racing chanced its teenage driver on a later stop, knowing the RB12 wouldn’t be a match for the Mercedes in the dry.

The gamble didn’t work but the Dutchman was left no worse off, maintaining second place ahead of Rosberg after pitting from his fleeting race lead.

The battle being characterised by both the inefficiency of the Mercedes chassis when closely following other cars and Verstappen’s centimetre-perfect defensive driving, but by lap 38 the Red Bull Racing car was overcome by the pace of the Mercedes and yielded the position.

“It was amazing,” said Verstappen on the podium, the third of his career. “It was very exciting.

“Very tricky at the beginning — at the end of the stint I was catching up to Lewis, but I stopped one lap too late. I still had great pace; I could still see the top two.

“I have to say thank you to Red Bull for giving me such a great car.”

Hamilton had built a meagre eight-second gap to the battling pair — he later attributed the small margin to extreme management of his power unit given how few sets he has available to him after a number of failures — and with Rosberg now in clean air the gap shrunk to less than six seconds by lap 45.

Hopes for another on-track meeting between the Mercedes teammates were dashed, however, when Rosberg slowed dramatically on lap 47 with a gearbox problem.

Rosberg radioed his pit wall, which told him there was a problem with seventh gear and instructed him to shift from sixth to eighth in quick succession, allowing the stricken Mercedes to finish the race in second when it was otherwise due to stop on track.

Though Rosberg made it onto the podium, the advice he received from the pit wall raised the ire of the stewards in light of the clampdown on radio communication that assists the driver.

After almost four hours of investigation, the stewards decided that Mercedes breached article 27.1 of the sporting regulations, which states “the driver must drive the car alone and unaided”.

Rosberg’s race time had 10 seconds added to it, which dropped him to third in the official classification.

“Having considered the matter extensively, the stewards determined that the team gave some instructions to the driver that were specifically permitted under technical directive 014-16,” said the stewards via a post-race document.

“However, the stewards determined that the team then went further and gave instructions to the driver that were not permitted under the technical directive and were in breach of article 27.1 of the sporting regulations.”

Mercedes has lodged an appeal against the decision.

This is the first weekend at which the FIA was to recommend potential breaches of the radio ban to the stewards, and as such the matter sets the first precedent.

Under this ruling, future interpretations will likely allow a team to tell its driver that a part or system is failing, but not coach them in rectifying or driving around the problem, even if the problem is terminal.

Hamilton’s resounding victory over his teammate slashes the German’s championship lead to just one point with two races remaining until the midseason break.

The top three raced in a private bubble for much of the race because the first pit stop window was staggered across three laps, and those who waited until the end of lap seven had the advantage of a virtual safety car caused by Pascal Wehrlein’s beached Manor car.

It served to drop Daniel Ricciardo, the only other competitive car in the race, off the leading pack.

The Australian finished a lonely fourth, almost 18 seconds behind Verstappen and 43 seconds ahead of Räikkönen in fifth.

The German suffered a torrid weekend from the moment his gearbox failed in free practice three, earning him a five-place grid penalty.

His qualifying performance was subsequently lacklustre — he set the sixth-fastest time before starting eleventh with his penalty — and he languished outside the top 10 for much of the race before picking up two points.

Daniil Kvyat finished tenth for a solitary point, ahead of Felipe Massa, noteworthy only as the highest-placed Williams car representing a team that continues to perform badly in wet conditions.