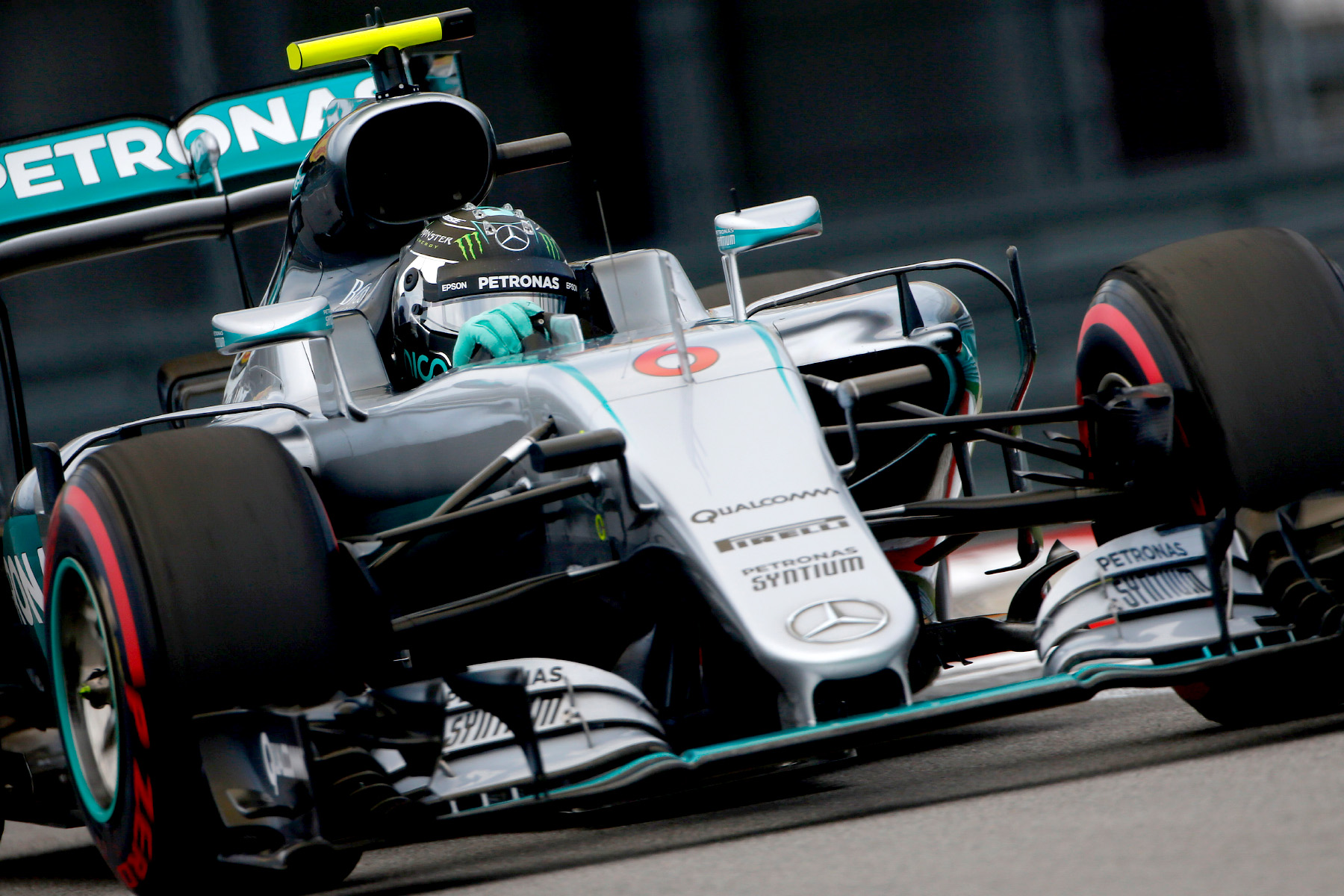 The German stretched his lead to 43 points over teammate Lewis Hamilton, who recovered to second at the flag after starting from P10 due to a qualifying power unit problem.

Though the problem, which struck in qualifying during the previous round in China, didn’t reoccur in the race, Hamilton was forced to back off in the second half of the race with a water pressure problem while Rosberg’s power unit was sending the pit wall unusual data readings.

Rosberg was entirely unchallenged throughout the race after getting away cleanly off the line, ensuring he avoided the first-lap melee that ensued behind him.

Daniil Kvyat nudged the back of Sebastian Vettel at the first turn, which pushed the Ferrari into Daniel Ricciardo’s Red Bull Racing car, damaging his front wing.

Vettel sped out of the corner with Kvyat close behind, but as the German attempted to navigate around Sergio Perez’s punctured Force India Kvyat again hit the back of the Ferrari, sending it careering into the barriers.

In front of his home crowd the Russian was served as stop-go penalty for his central role in causing the chaos.

Kvyat and Ricciardo both required an early pit stop, aiding only slightly by the deployment of the safety car on the second lap. Both cars were put on medium tyres in an attempt to complete the entire race on the one set from fifteenth and seventeenth, but the tyres were almost unworkable and both cars required an extra stop, eliminating them from points contention.

Hamilton was the chief beneficiary of the mayhem and found himself in fifth behind the safety car behind Räikkönen in second and the Williams cars in third and fourth.

At the restart on lap four Bottas jumped Räikkönen for second and Hamilton passed Massa for fourth. By lap seven Räikkönen was third and chasing down Bottas, but the Williams was too well-suited to the circuit for the Mercedes to make too great an impression.

Tyre degradation was typically low on Sunday, so the position would be decided by pit stop efficiency. Williams gambled on its superior pace at the stops and brought Bottas in first on lap 17, with Mercedes bringing Hamilton in one lap later.

The gambit succeeded, albeit temporarily — Bottas held position after Hamilton exited the pits, but on the fresh soft tyres Hamilton slipped by the Finn one lap later.

Hamilton spent the next 20 laps slowly trimming Rosberg’s lead. On lap 22 the advantage stood at 12 seconds, and 15 laps later, assisted partly by lapped traffic, it had shrunk to less than eight seconds and looked likely to close further.

But the Briton was stopped yet again by a power unit problem when his team reported a loss of water pressure requiring Hamilton to ease off.

The problem took five laps to stabilise, at which point the gap to the lead was too great to close, even while Rosberg too slowed his car to mollify the unusual readings it was providing to his engineers. The Mercedes cars came home in their familiar first and second positions.

“It’s been an awesome weekend,” said Rosberg on the podium. “The car’s been fantastic, it felt very special out there. Very, very happy, thanks to everybody.

Of course great job from Lewis to come up to second so quickly. I was always aware of what he was doing and trying to keep the gap as much as possible.”

The German still refuses to be drawn on his commanding title lead.

“It’s four races from 21,” he protested. “Lewis is going to come back of course. He’s on it and as motivated as ever. Early days, I’m just taking it race by race.”

Lewis, for his part, didn’t suffer from lack of trying.

“There wasn’t a doubt in my mind that I could win it,” he said. “I had the pace, but then I had a problem with the engine again, so I had to back off.

“I wasn’t at full throttle down the straights, I had to look after it.”

Kimi Räikkönen salvaged Ferrari’s underwhelming weekend with a third-place finish after starting from third on the grid, his red car never really in contention for any greater haul of points.

“Of course it’s not exactly what we want, we want to win races,” he said. “But we tried today.

“We had a good speed, but we had to fuel save and take some measured, so you cannot push as fast as the car could go.”

Bottas and Massa finished off the podium in fourth and fifth, ahead of Fernando Alonso in his first points-scoring finish of the year.

The Spaniard was the highest-placed driver one laps down on Rosberg, but held a comfortable eight-second advantage over Kevin Magnussen, who scored his first points of the year.

Romain Grosjean returned to the points after his disastrous Chinese Grand Prix with an eighth-place finish, ahead of Sergio Perez and the second McLaren of Jenson Button.