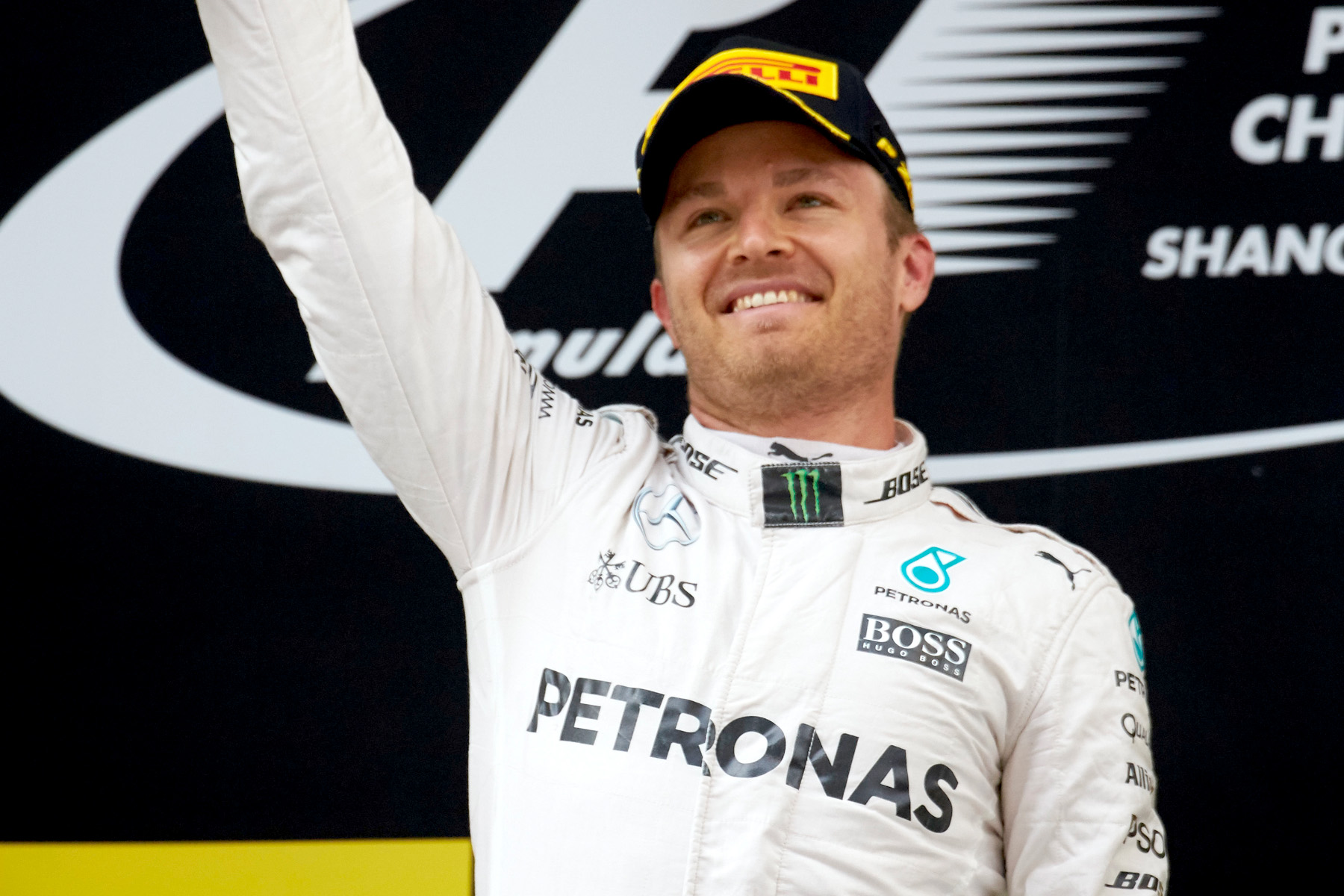 Nico Rosberg has cruised to victory in the Chinese Grand Prix after his chief rivals tripped over each other in the opening stint.

The championship leader was totally untroubled once he broke away from the pack, leaving fellow podium-getters Sebastian Vettel and Daniil Kvyat to fend off the competing midfield.

Rosberg started the race from pole, but a lightning start by Red Bull Racing’s Daniel Ricciardo had the Australian ahead on the first lap.

Ricciardo started the race on the supersoft tyres while Rosberg was equipped with the softs, and though endurance would be on the side of the Mercedes, the RB12 threatened to keep the German from running away from the pack in the lead.

Behind the leading pair, however, the two Ferraris, which started on the second row, came together in the first corner.

Sebastian Vettel and Kimi Räikkönen were side-by-side in the first turn when Vettel thought a surging Kvyat was going to spear into his right-hand side. Vettel took avoiding action into his teammate, and both sustained front wing damage.

Räikkönen was sent into the pits for a nosecone replacement, but Vettel’s damage was less serious, allowing the team to leave him out in ninth place.

“Obviously it’s difficult to judge how it looked from his point of view,” said a vocally frustrated Vettel after the race.

“I was a bit on the back foot at turn one. I wanted to go on the inside to overtake [Räikkönen], and I think Daniil was trying to do the same thing with me.

“He was coming with a lot of speed into that gap — I was very surprised, so I had to steer left … but there’s no way, so we made contact.”

Kvyat was unapologetic after the race.

“I had a really good start,” he said. “You see the gap, you go for it on the inside.

“It’s a risky move, I agree with Seb, but these moves can bring you the podium — and I’m on the podium.

“I will keep on risking, everyone should expect that.”

Caught up in the first-lap carnage was Lewis Hamilton, who was attempting to launch a recovery from last place on the grid.

Hamilton’s front wing ended up under his car, necessitating the first of what would be five pit stops for the reigning world champion.

In the lead Ricciardo was being hunted by Rosberg, who was biding his time in his superior machinery for an overtake — but on lap three Ricciardo suffered a puncture and was sent to the pits, gifting Rosberg the lead.

“The start was not quite good enough,” said Rosberg.” Daniel got a really good one.

“I attacked him straight away then managed to pull a great gap after that.”

The winning margin — an impressive 37 seconds — was illustrative of what was a quiet afternoon for the German, who now leads the championship by 36 points.

“I didn’t see anything, I have no idea — I just know the gap and that I had to try to extend it as much as possible.”

With all the contenders seemingly out of contention it seemed the life had left the race, but the debris from the various first lap incidents and Ricciardo’s puncture was sufficient for race direction to deploy the safety car to neutralise the grand prix.

The field bunched up with all but seven cars taking the opportunity to stop. Vettel ended up fourteenth after his stop, Ricciardo in sixteenth, Räikkönen in eighteenth and Hamilton in twentieth.

Mercedes, with little to lose on Hamilton’s side of the garage, pitted the Briton twice to switch him from the soft to the supersoft and back to the soft to satisfy the rule requiring at least two compounds to be used during a race while maximising their strategic options.

The stricken high-flyers all committed to three-stop strategies, with Hamilton opting for a four-stop race — his free extra stop under the safety car effectively free.

The three-stop proved the fastest way forward and demonstrated how far ahead of the field Mercedes, Ferrari, and now Red Bull Racing are.

Kvyat, unaffected by the first-lap shenanigans, inherited second place after Ricciardo’s puncture, and Vettel pit himself against the Russian’s stint lengths to vie for a podium place.

Using a new set of supersoft tyres saved in qualifying the German made it up to fourth by lap fourteen— five laps after the safety car came in on lap nine — and at the second pit-stop window undercut Kvyat to switch to soft tyres.

Both drivers then pit on lap 35 for a 21-lap stint to the end, but Vettel opted for soft tyres and Kvyat the medium knowing the RB12 couldn’t compete with the Ferrari for tyre life, which handed the German the advantage two laps later when he seized what would turn into second place.

Ricciardo too put forward his case for driver of the day in what he called his best ever race.

The Australian showed consistent pace on the same strategy to his teammate to recover from sixteenth to fourth, running out of laps to duel with Kvyat on identical tyres.

Räikkönen followed the Australian through the field for fifth, taking a hit with a shorter second stint after the safety car to take advantage of an elongated run on the medium before a blast on the softs in the last stanza.

Hamilton, however, couldn’t find the same success in his Mercedes, which had suffered more damage in his first-lap incident than first thought.

His W07 looked quick on its post-safety car stint on the softs, but his pace began to wane during his second stint on the same yellow-marked tyres before evaporating completely on his 26-lap final stint on the mediums.

He spent the final part of the race battling with Felipe Massa, who was on an ambitious two-stop race with a 25-lap run on the mediums to the close, for sixth, but couldn’t find a way past the Brazilian.

“It was definitely a difficult one,” said Hamilton. “I got a good start — always difficult starting from the back — and I tried to avoid whatever was happening ahead of me, but I got tangled in it.

“The car was pretty damaged. I think the suspension was damaged as well, so the car was flexing like crazy.

“Every time I did a stop I had to come back through [the pits] again. In the end there was nothing left in the tyres.

“Not a great finish for us this weekend, but hopefully onwards and upwards.”