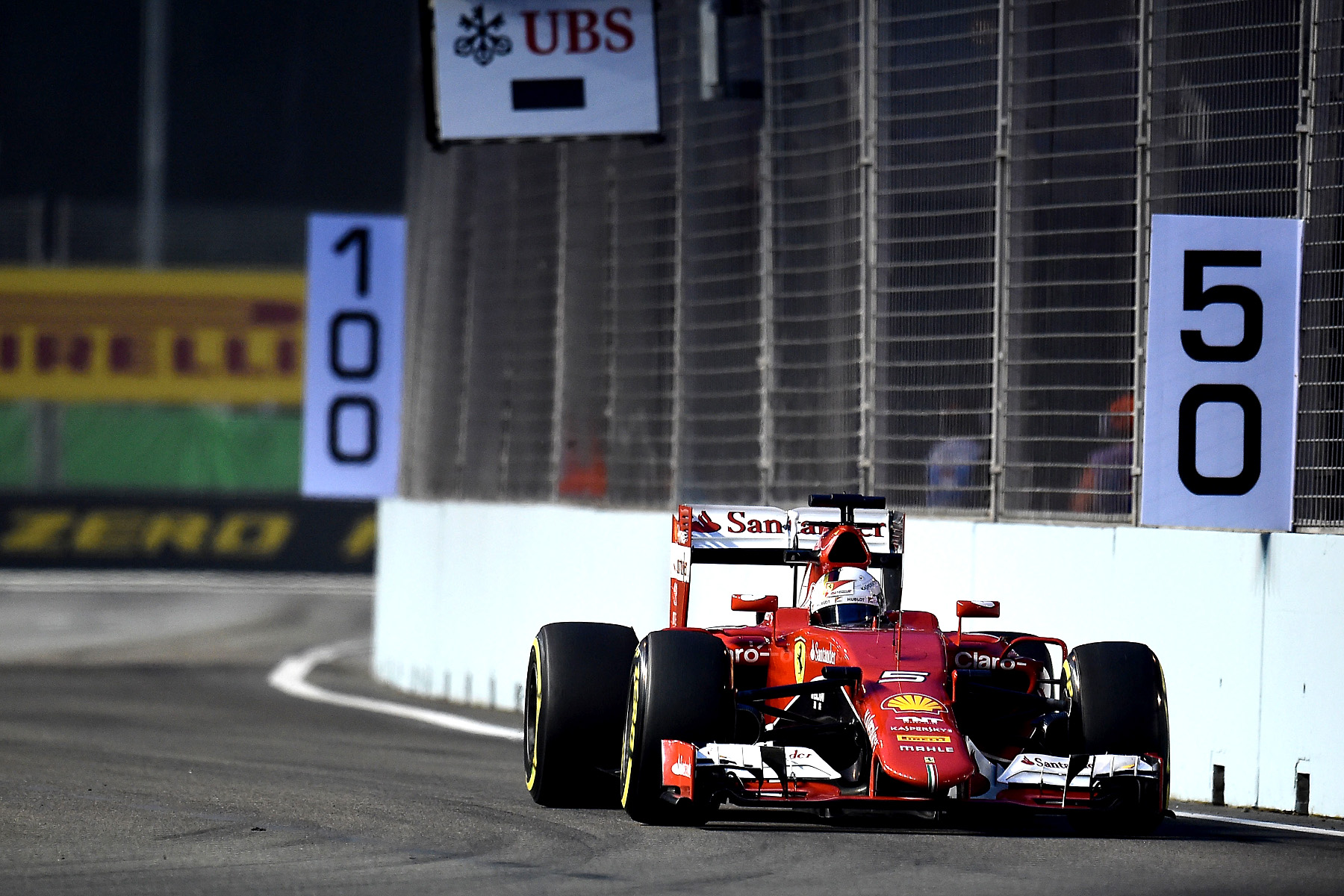 Sebastian Vettel unexpectedly stormed to pole position on the streets of Singapore while Mercedes floundered for pace in fifth and sixth.

Both Vettel’s Q3 laps were good enough for pole and it was obvious before he completed his second run that pole was in the bag, but the German crossed the line in anger nonetheless to record a time of 1 minute 43.885 seconds, 0.7 seconds better than the rest of the field.

“It was looking pretty good from this morning and the car was fantastic to drive,” said Vettel after taking Ferrari’s first pole position since the 2012 German Grand Prix. “It just got better through qualifying.

“I am surprised by the margin but it all came together and I nearly had a perfect lap in the end.

“I was very, very happy with the laps, especially the last one.”

Daniel Ricciardo will start alongside Vettel on the front row after he nudged his Red Bull in front of Kimi Räikkönen’s Ferrari with a 0.2-second margin, while the RB11 piloted by Daniil Kvyat was a further tenth behind.

More shocking than two Renault cars in the top four, however, was the woeful performance of the hitherto dominant Mercedes cars, with neither Lewis Hamilton in fifth or Nico Rosberg in sixth looking threatening at any point during the weekend.

The result was a combination of the Mercedes car struggling to generate tyre temperature despite Pirelli bringing its two softest compounds — the soft and the super-soft — to Marina Bay and of Ferrari’s improved power unit, which exacerbated the distance between Hamilton and Vettel.

“The laps weren’t perfect,” lamented the championship leader. “I was on the knife edge trying to close the gap.

“The problem this weekend is the tyres are just not working for us. We can’t get it into the window and we are sliding around all over the place.”

Both Red Bull Racing and Ferrari looked to have similar long-run pace, in both instances superior to Mercedes’ best practice efforts, setting up a tantalising race-day proposition on Sunday.

The nature of the Singapore circuit, dominated by slow-speed corners, plays towards aerodynamic performance, and therefore into the hands of Red Bull Racing, rather than to raw power, which is the strength of the Mercedes car.

However, Hamilton holds a 53-point lead over teammate Rosberg in the drivers championship with seven races to go, so the Briton will take solace in the fact that a lacklustre Singapore Grand Prix will do minimum damage to his title defence.

Valtteri Bottas was a further two tenths behind Rosberg, demonstrating Williams’ progress in its high-downforce configurations since its disastrous P14 and P18 qualification on the streets of Monaco in May.

Bottas was separated from his ninth-placed teammate Felipe Massa by Max Verstappen, who put the only top-ten Toro Rosso in eighth place, while Romain Grosjean salvaged Lotus’ afternoon after teammate Pastor Maldonado was eliminated in Q1 by qualifying in P10.

← Monza negotiations have no deadline: Capelli
Vettel cruises in Singapore →