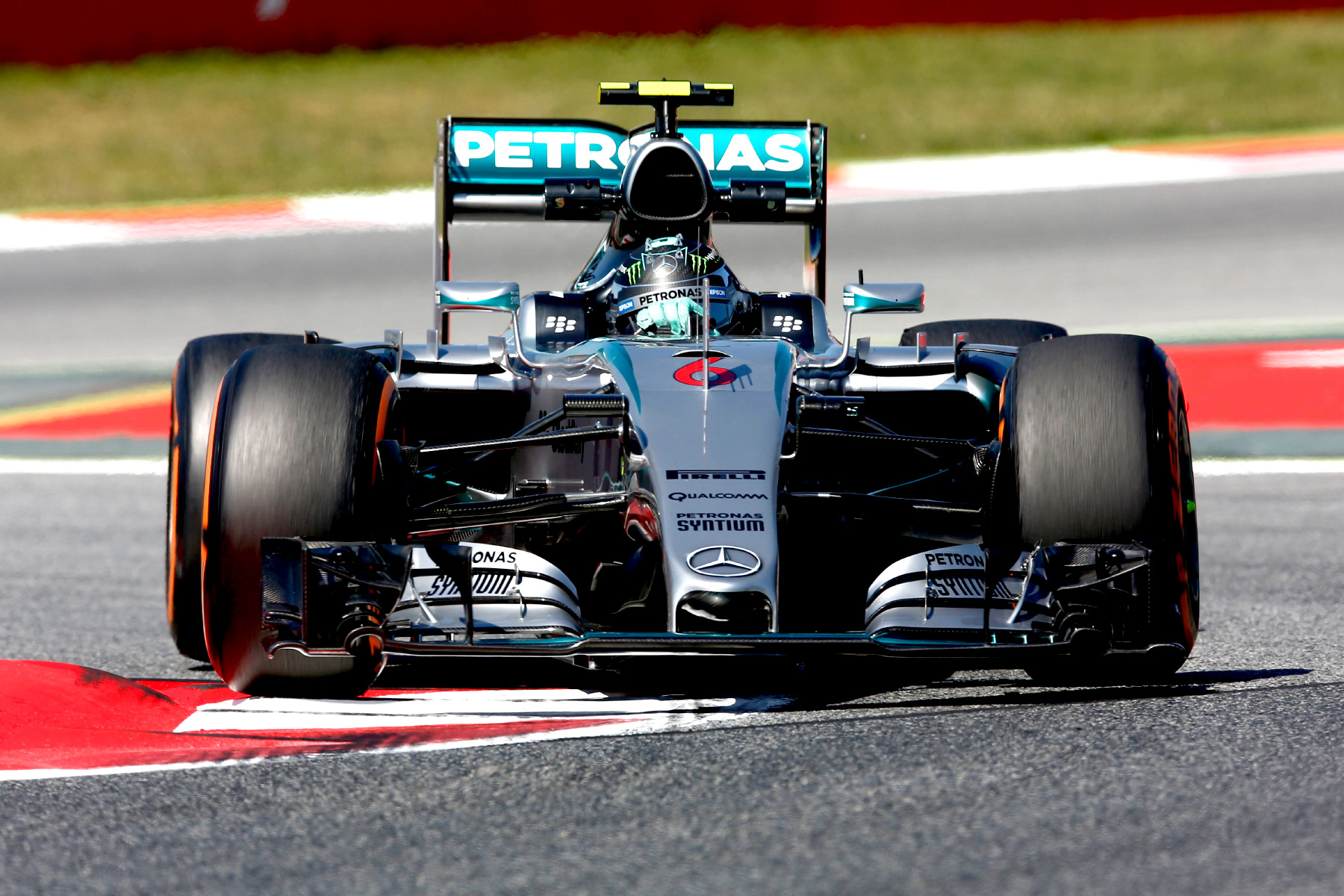 Nico Rosberg has won the 2015 Spanish Grand Prix from pole position to reignite his championship campaign.

Rosberg executed a flawless start and led unchallenged into the first corner, from where he drove his own race unthreatened by any other driver.

Victory allowed Rosberg to cut his championship deficit to Hamilton to 20 points after five rounds.

“It was a perfect weekend to get pole and win the race like this,” said Rosberg.

“Also thanks to the team — they’ve been perfect all weekend. Really great.”

Lewis Hamilton, in contrast to his Mercedes teammate, suffered a start of excess wheelspin that made him easy prey for Sebastian Vettel at the first turn.

The Ferrari proved the spanner in Mercedes’ works, forcing the Silver Arrows pit wall to strategise its way back into second place after Hamilton was unable to pass Vettel on track.

Vettel sounded resigned on team radio late in the race, admitting that Mercedes was “in its own race”.

Though he was able to keep Hamilton at bay for the opening two stints, Mercedes switched the championship leader to a three-stop strategy, to which Ferrari had no answer.

The German, nonetheless, thought second could have been possible had all the cards fallen in Ferrari’s favour.

“I think it was,” Vettel said. “I was keeping up pretty well.

“I had a good start — I was able to get past Lewis.

“We did the right thing covering at the first stop, but unfortunately [Hamilton] switched to three stop and they were too quick.

“Third is the best we could do, [but] the car was great.”

Valtteri Bottas withstood significant pressure from Kimi Räikkönen in the fight of the Fins for fourth place.

That the hard-shod Williams was able fend off the Ferrari despite Räikkönen using the quicker medium tyre was down to the red car’s inability to cope with sitting in Bottas’ turbulent air in the final chicane.

Oversteer moments for Räikkönen as Bottas put down the throttle onto the pit straight prevented him from maximising his use of the DRS, consigning him to fifth.

Felipe Massa, recovering from a hugely disappointing ninth in qualifying, reverted to Williams’ inherent pace as the third quickest car, finishing sixth with a 20-second buffer to the car ahead and 40-second gap to Daniel Ricciardo behind.

The Australian, who qualified tenth, was gifted two places by the maladjusted Toro Rosso cars dropping their drivers into the midfield, and a third place by teammate Daniil Kvyat, who dropped to thirteenth place on the first lap.

Ricciardo was able to hold his own in P7 in a lonely race from there.

Romain Grosjean was another benefactor of the Kvyat and the Toro Rosso duo falling back into the pack, jumping from eleventh to eighth.

The Lotus car did not have the much-hyped Red Bull-matching pace, however, and while Grosjean finished 30 seconds behind Ricciardo, he was just five second ahead of Carlos Sainz and Daniil Kvyat at the flag.

Sainz and Kvyat concluded the race in a wheel-to-wheel battle in the final two points-paying positions, culminating in Sainz running wide at the first turn and taking ninth place.

The stewards indicated that Sainz’s move would be investigated after the race for gaining an advantage by driving off the track.

Max Verstappen was put on an alternative strategy to Sainz, running medium-hard-hard compared to the Spaniard’s medium-hard-medium, leaving him vulnerable to his crowd favourite teammate in the final stint.

The Saubers and Force Indias mixed in with each other at the rear of the field, with Felipe Nasr coming out on top of Sergio Perez in P12 and P13, and Marcus Ericsson beating Nico Hülkenberg to the finish line.

McLaren-Honda’s performance upgrades for Spain were totally ineffective in the race, consigning Jenson Button to sixteenth and one lap down.

Button complained of abnormal throttle response, after the car had problems with brakes in qualifying, making the car close to undriveable.

His fortunes were brighter than those of teammate Fernando Alonso, who nursed brake issues throughout his first stint before they failed as he boxed for his first stop.

His front jack man leapt out of the way of the car just in time, with the McLaren coming to rest hallway to the next garage. He was promptly wheeled into his garage and retired.

Will Stevens and Robert Merhi brought up the rear, two and three laps down respectively.

Pastor Maldonado was the only other retirement, with the Venezuelan picking up bizarre damage to his rear wing, which had a collapsed left support beam. He was retired on lap 47.