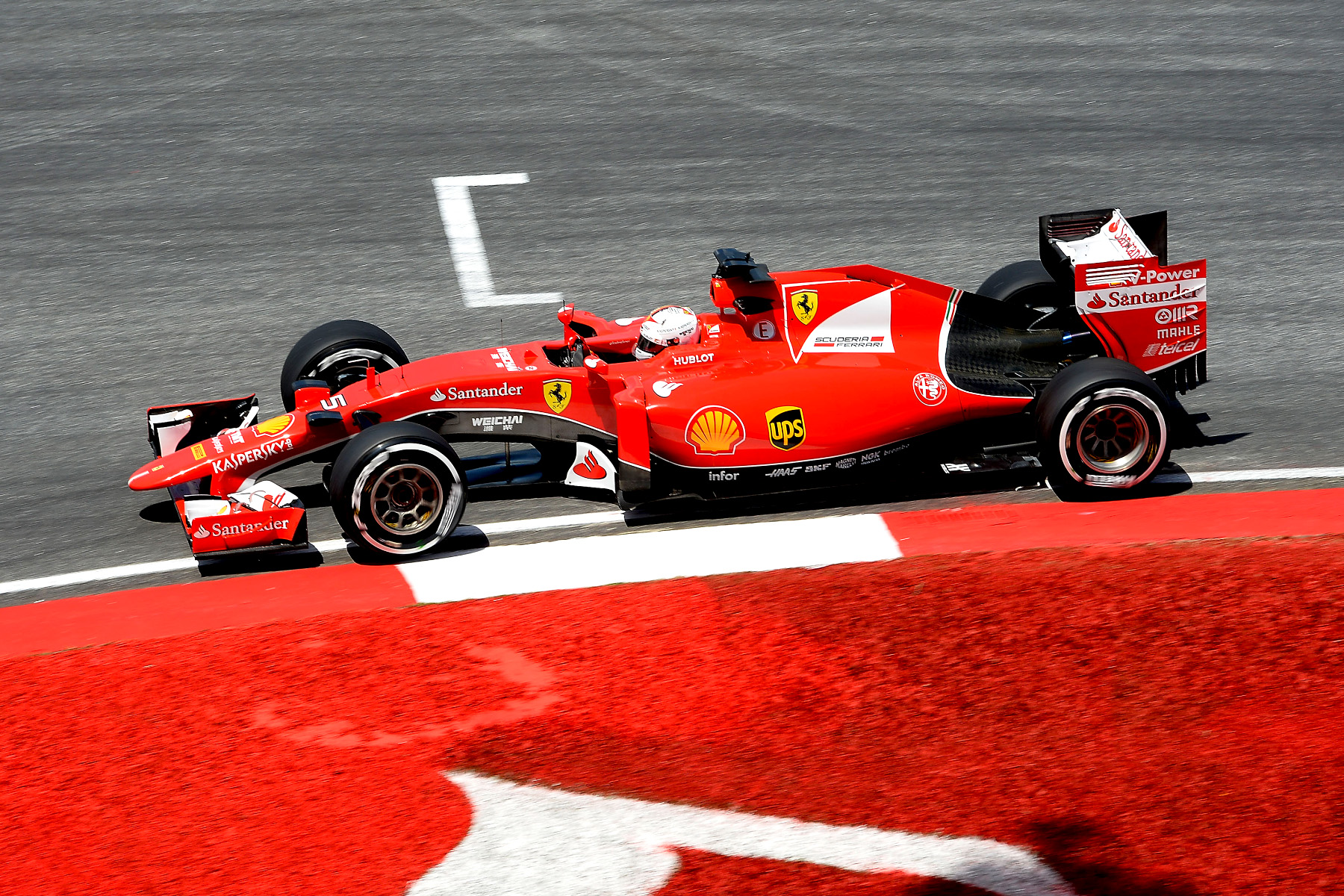 Sebastian Vettel has taken a shock victory for Ferrari in Malaysia ahead of title favourites Lewis Hamilton and Nico Rosberg.

Vettel and Ferrari drove an utterly controlled and calm race, putting Mercedes on the back foot for the first time in more than half a year.

All three cars started the race on the medium tyre, but the strategy pivot point was the safety car interruption on lap five, when the Mercedes drivers came in for hard tyres while Vettel stayed out.

The four-time World Champion was able to capitalise on his Ferrari’s easy use of the tyres to perfectly judge his race from there, while Mercedes floundered on the prime for 20 laps.

Compounding the Silver Arrows’ problems was its pre-qualifying expectation that the hard tyre would be the preferred race tyre, which triggered them to use two sets of mediums during Q1 and Q2 on Saturday.

The strategy backfired, however, when the opposite proved true on race day, leaving Hamilton and Rosberg with only one possible stint on the softs.

“It’s been a while since I’ve been on the top step, and it’s obviously my first time with Scuderia Ferrari,” said Vettel. “I’m speechless.

“We beat Mercedes fair and square. It’s a great achievement. We have a great car.”

Vettel also reflected on his difficult 2014 season, during which he considered quitting the sport.

“Last year was not a good year for me — I think we had a great car, but I struggled to extract the performance. This year’s car suits me very well, and the team has been phenomenal.

“Today the race really was spot on. We had a great strategy, great pace, and we beat them fair and square. Thanks to the team here and to the team in Maranello.”

Vettel, regaining his composure, considered the night ahead of him.

“I think today is a very special day and will always remain a part of me. It is bloody hot, though!

“We know there’s a long way ahead of us, but for now I don’t care — I just want to celebrate today.

“I want to get pissed tonight, I don’t really care!”

A feeling of missed opportunity enshrouded the Mercedes garage after the race, with the team feeling that the Malaysian Grand Prix slipped through their fingers.

It was a loss of the team’s own making, however, with long-term strategy mistakes costing both drivers more than the decision to pit under the safety car on Sunday afternoon.

“Firstly a huge congratulations to Ferrari and Sebastian,” said Hamilton. “They had some good pace today.

“I gave everything I could. I knew they had made a step, but I didn’t know how big — obviously they were too fast for us today.

“I think we will get back together as a team and figure out where I was losing time today. There are definitely areas we can improve, and we’ll definitely be fighting for the next race, which I’m excited about.”

For its disappointment, Mercedes was sporting in defeat, staying true to its word that it wanted some more competition.

Kimi Räikkönen finished an impressive fourth in the second Ferrari after picking up a puncture in a tangle with Sauber’s Felipe Nasr on lap two, utilising a medium-medium-medium-hard three-stop strategy.

Valtteri Bottas and Felipe Massa had a scrap for fifth in the final two laps of the races, with both employing identical strategies to Räikkönen.

Williams discounted itself from a strong result after overcompensating its car setup to better warm up its tyres. The result was that the car worked its tyres too hard, with P7 and P8 their places on the grid.

The bottom half of the points paying positions comprised the Renault-powered cars, but in a sequence not seen since the height of Toro Rosso in 2008.

The Red Bull junior team outranked both of the Red Bull Racing senior cars, with Max Verstappen and Carlos Sainz leading Daniil Kvyat and Daniel Ricciardo in positions seven to 10.

Carlos Sainz was a particular standout with a drive that promoted him from P15 on the grid to eighth over the line and included a gutsy pass on Daniel Ricciardo and Daniil Kvyat during their second stints.

Ricciardo could only manage a single point by the end of the race after suffering from brake issues for much of the race.

Roberto Merhi finished a notable fifteenth and last, completing Manor Marussia’s first race distance of the year. His teammate Will Stevens was withdrawn one hour before the race after mechanics were unable to fix the fuel pressure problem that prevented him from qualifying yesterday.

Jenson Button and Fernando Alonso were also forced onto the retirement list with problems in their Honda power units, along with Lotus’ Pastor Maldonado and Sauber’s Marcus Ericsson.

Formula One continues in a fortnight with the 2015 Chinese Grand Prix at the Shanghai International Circuit on April 10-12.