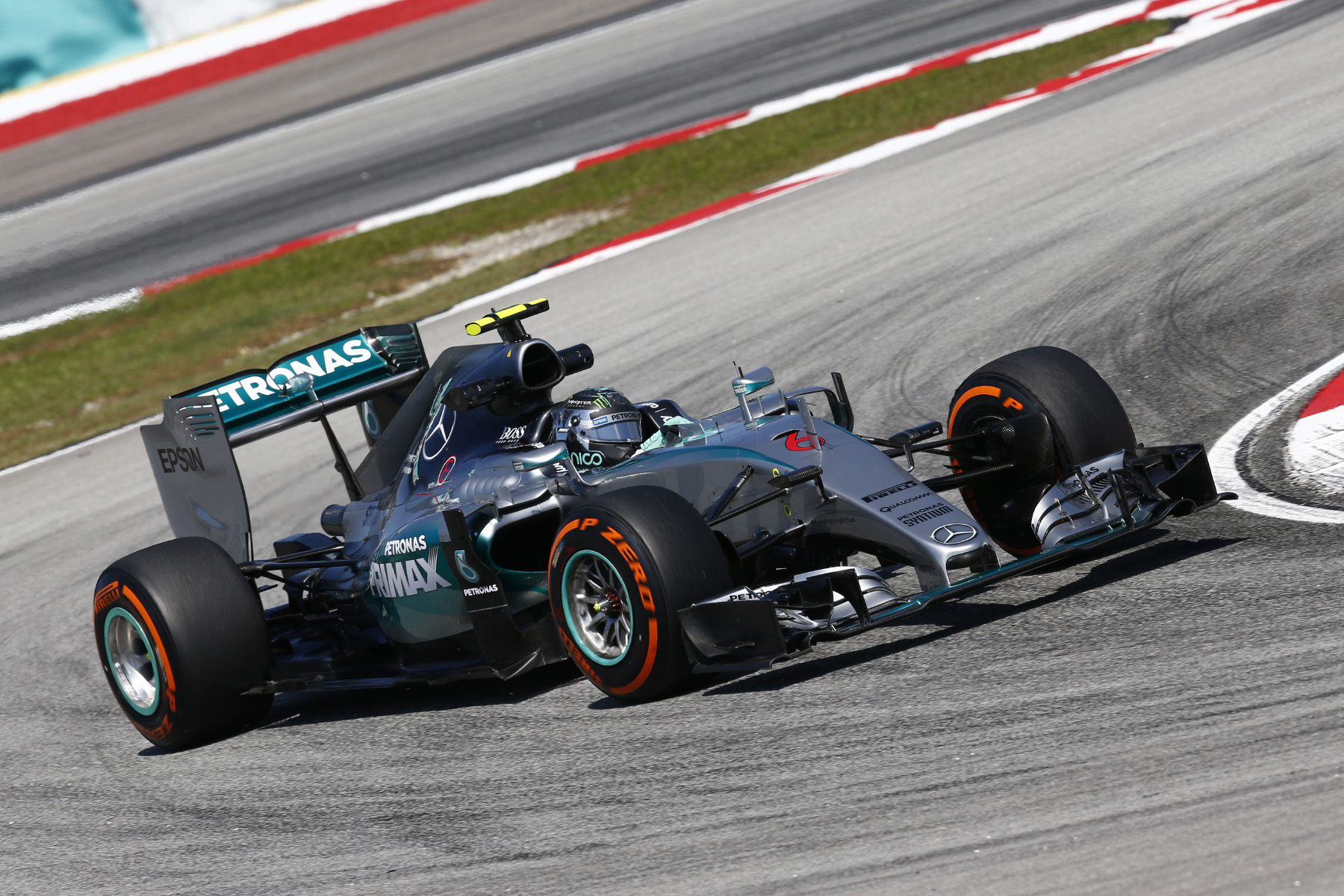 Nico Rosberg has turned the tables on teammate Lewis Hamilton by taking honours in the final practice session at the Malaysian Grand Prix.

Rosberg trailed Hamilton throughout Friday despite the Briton suffering a multitude of telemetry and engine problems that curtailed his running.

But the German controlled Saturday practice from as early as the initial runs on the hard tyre, before pressing his advantage with the soft tyre during his qualifying simulation.

Hamilton, though, continued to suffer from his lack of preparation time, radioing his team that the brakes were “All over the place”, and suffering a number of lock-up.

The session ended with a Mercedes one-two — Rosberg’s 1 minute 39.873 seconds was 0.183 seconds faster than Hamilton’s best effort — but Ferrari appear to be closer to the frontrunners than expected.

Sebastian Vettel logged a lap just three-tenths of a second slower than Rosberg on the early hard tyre runs, less than a tenths ahead of Daniel Ricciardo in third, albeit on the soft tyre estimated to be worth between 0.8 and 1.0 seconds.

With medium compound tyres bolted on for the final ten minutes, Mercedes sought to put its dominance beyond reasonable doubt, the Ferrari cars clung on to give Mercedes something to think about.

Kimi Räikkönen’s quickest time put him third, and just half a second behind the pacesetter. His teammate Vettel was two-hundredths of a second further back.

Though Ferrari appears to be stepping its fight with Williams up a notch, Felipe Massa and Valtteri Bottas were less than two-tenths behind the red cars, themselves also separated by little more than a hundredth of a second.

While Mercedes will undoubtedly have more on tap for qualifying later today, Ferrari’s pace has confirmed the team’s quiet optimism thus far this weekend: the Scuderia is putting its fallow years behind it, and is up to the challenge of attacking Mercedes.

Disappointed will be Williams, which appears stuck for answers to overcome the slender gap to its Italian rivals despite its superior straight-line pace. The Grove-based team will be setting up its car with the race in hope that its long run pace may prove enough to get it onto the podium.

Added to the mix will be the threat of thunderstorms to strike the track at around qualifying time — the near predictable presence of which was part of the reason the race has been moved to 3PM local time tomorrow, despite qualifying remaining in its usual 5PM timeslot.

Daniel Ricciardo gave Red Bull Racing a glimmer of hope for qualifying with his best time two-tenths behind Bottas’ Williams, which he set at the beginning of a 12-lap long run, in lieu of the long run test he was due to complete yesterday.

Carlos Sainz and Max Verstappen were eighth and ninth for Toro Rosso, with the latter complaining during the session of locking wheels and low track grip.

Marcus Ericsson wrapped up the top ten, thanks largely to the Sauber’s Ferrari engine, which is proving extremely handy in the fast sectors one and three.